Meanwhile, Manchester City's Raheem Sterling is among several EPL players who new Barca manager Xavi is eyeing for loan deals in January amid a cash crunch.

•Despite topscoring Man City's charts with eight goals this season, Algerian Riyad Mahrez is unhappy at spending more time on the bench than on the pitch 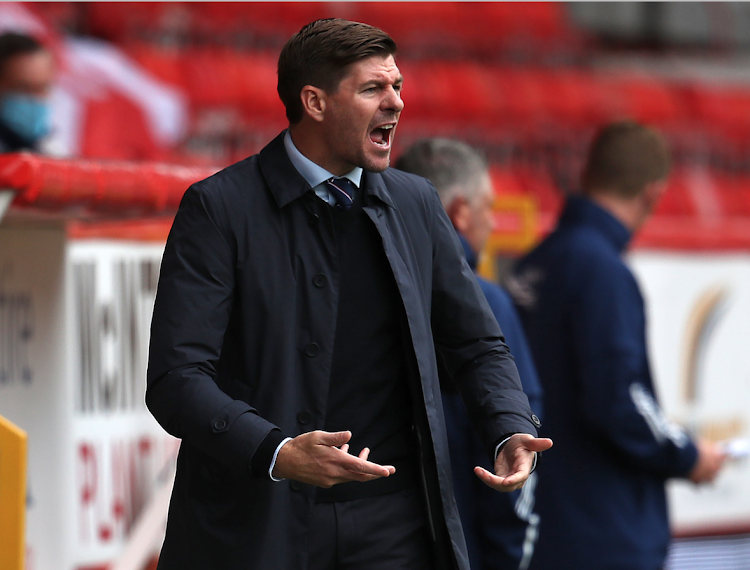 Liverpool legend Steven Gerrard admitted to us this week that he has taken a big gamble with his career by taking over at Aston Villa.

Despite the club’s slide down the table, he is already thinking about the away match against Liverpool on December 11 and he knows it will not be a Christmas gift of three points.

He said at training this week: “I can’t control the noise around the Liverpool game but that’s not important. One thing I can tell you is that when I commit, I go all in and I promise that to the players, the staff and the fans.”

His three-year deal begins with a tricky match against Brighton this weekend. He had his first training session on Tuesday. The fans will welcome him at Villa Park with open arms and it is good to start with a home match.

Judging by his training sessions, his priority is to improve his defence, which leaked 13 goals in Dean Smith’s last five games triggering his dismissal.

Gerrard said: “One thing I’d like to improve is the structure of the defence. I am concentrating on how we play out of possession, our distances and our shape and what we do to regain the ball. That’s very important to me. I’ve been lucky to work with some world-class coaches in my career as a player. There is a lot of talent in this squad but we don’t have much time.”

Solskjaer and international players back at work

Marcus Rashford has been training for the last week with Manchester United’s Under-18 squad.

Most of United’s non-international players had been given time off during this period and Ole Gunner Solskjaer raised eyebrows when he flew to his home country of Norway for a few days holiday.

For an under-siege manager, it was a risky move but he did have permission from the club management. He returned to Old Trafford along with 11 United players on Tuesday and they went for an immediate training session.

Rashford has recently trained alongside Mason Greenwood and Luke Shaw, who were trying to regain full fitness before the away game at Claudio Ranieri’s Watford.

Rashford has certainly been putting in maximum effort recently to keep fully fit and often works through triple training sessions.

His reward is an impressive three goals in six games but United now face a punishing schedule of 11 games during the rest of 2021.

Solskjaer will definitely not have Raphael Verane available and he could be out for another six weeks.

Edinson Cavani is also absent with a tendon injury and this has motivated Rashford to keep himself fit as Solskjaer needs him to strengthen the forward line.

Injuries pile up for Liverpool

Liverpool are facing their game against Arsenal without several key players.

Both Jordan Henderson and Andy Robertson have struggled this week and the Reds tell me that Robertson will not be available because of a hamstring injury sustained in Scotland’s World Cup qualifying match against Denmark.

Henderson is hoping to be available and underwent tests on Thursday.

James Milner is also a hamstring doubtful and so is Naby Keita.

Curtis Jones is definitely out for several weeks because of an eye problem. Good news for Jurgen Klopp is a return to fitness of Sadio Mane, who looks to start this weekend after training successfully.

I am picking up a lot of news that Riyad Mahrez is unhappy with his current situation at Manchester City.

Mahrez has, for my money, been one of the most successful players during Guardiola’s reign and I think the manager is making a mistake by losing the confidence of his star winger.

City have played 990 minutes of football this season but the former Leicester man has played only 261 of those minutes.

I hear Real Madrid and Paris St Germain will move for Riyad should he decide to leave and his contract is up in the summer of 2023.

Ainsley Maitland-Niles has said the drama that swirled around him in the summer is now gone and he is happy to be playing regularly for the first team.

Ainsley went on social media in the summer to try and force a move away from the Emirates Stadium so he could join Everton. He has now made 10 appearances this season after Arsenal refused to sell him.

He concluded: “I am just thinking about the future and what’s ahead of me. I am looking for more minutes on the pitch and I just need to keep my head down and keep working hard.”

The groin injury to Partey has given Ainsley his chance again and he aims to take it and keep it.

Smith has a tough task keeping Norwich in PL

I hope you know the old saying: “Out of the frying pan and into the fire.” That is certainly what Dean Smith has done in joining Norwich directly after being sacked by Aston Villa.

Joining on a two-and-half-year contract, he has entered a club where the owners are very patient people indeed.

Some would say too patient and they should have sacked Daniel Farke long before Norwich were tailed off at the bottom of the Premier League table and five points away from safety.

Frank Lampard was interviewed twice but pulled out of the running when he decided it is mission impossible and he wants a more positive step forward with his next appointment.

Smith will not have money to spend. Norwich are not backed by Middle East oil money and the owners are a successful cook, Delia Smith and her publisher husband Michael Wynne-Jones.

As I said, very patient and nice people to work for but definitely not in the super-rich category. Norwich spent £60million in the summer and their transfer war chest looks very thin.

The main benefactor could be Todd Cantwell, who had fallen out with Farke and demoted onto the bench but under Dean Smith he has the opportunity to rise to the top again.

Smith is an admirer. On-loan Chelsea midfielder Billy Gilmour will be another who could do well under Smith and the new manager has to decide whether or not he wants to keep the Scotland international.

The owners have given Smith one directive: “Premier League survival.” He certainly has a tough job on his hands and begins his tenure with a home match against Southampton.

Winks can seize his chance under Conte

Tottenham are now experiencing the Antonio Conte style of management which means harder work and obeying instructions. One player who is making his mark is Harry Winks.

Conte has been impressed with the 21-year-old and he is being considered for a starting place against Leeds on Sunday.

Winks struggled to impose himself under Nuno Espirito-Santo and drew much criticism for negative play, passing the ball from side to side and often going backwards towards his own goal.

Under Conte, he is already more positive and going forward. Against Vitesse in the Europa League, he played 17 minutes and put in one particularly dangerous ball over the top into the penalty area.

Oliver Skipp misses the Leeds match this weekend as he accumulated five yellow cards for the season.

Conte has been working on midfield creativity in training and it is possible he will use Dele Alli, Tanguy Ndombele or Lo Celso to improve the attacking structure.

This is an important weekend for Conte as he fields his team at the Tottenham Hotspur Stadium for the first time.

It is no secret that Barcelona are in serious financial trouble. However, with newly installed legend Xavi in charge, the club want to support him as much as possible.

Several players are in Barca’s sights and they are trying to set up loan deals for January. Top of their list is Raheem Sterling and they have already been in touch with Manchester City.

Raheem said: “If there was an opportunity to go somewhere else for more game time, I would be open to it.”

Xavi also admires Chelsea’s Timo Werner. One name mentioned to me in Barcelona which did surprise me is Manchester United’s Edinson Cavani.

He was a sensational signing when he arrived from Paris St Germain but Ole Gunner Solskjaer has used him sparingly and he has only started two games. That is, because after Edinson signed, Cristiano Ronaldo arrived and he is the automatic selection.

Edinson planned to return to South America and United had to fight hard to get him and keep him. However, a loan spell at Barca until his contract expires next summer could suit all sides.

Every week fans scream for both Ronaldo and Cavani to play together but Solskjaer has preferred to link the Portuguese with Mason Greenwood and Marcus Rashford and this has angered those calling for Solskjaer to be replaced.

Aaron Ramsey on his way back to Premier League

Having just found his feet at Newcastle, manager Eddie Howe is looking around for players to strengthen his squad.

I have already mentioned Ross Barkley and now it is the turn of former Gunners' star Aaron Ramsey who is currently at Juventus.

Aaron earns a huge salary of £400k a week in Italy but his stay there has been marked by injuries and he has played only 70 matches in two years with only seven starts this season.

My sources tell me that Juve are open to selling Aaron in January and Newcastle with their Saudi billions will be first in the queue to bring him back to the PL.