•Elsewhere, Gor Mahia head coach, Mark Harrison, urged his players to maintain the momentum that has propelled them to three consecutive league wins this season

•The record champions moved second on the log after an emphatic 2-0 win over rivals Kariobangi Sharks at Kasarani Annex on Tuesday. 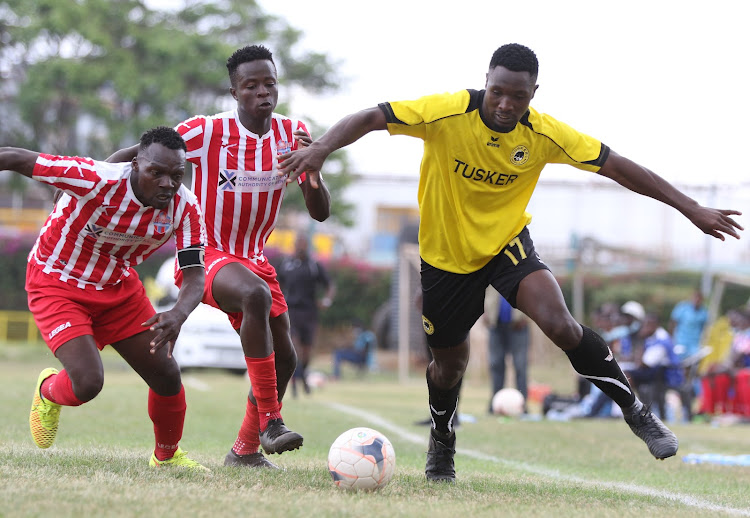 On-fire Talanta striker Francis Kahiro grabbed a brace on both sides of the interval that condemned the reigning champions to the bottom of the table as the competition entered its fifth round.

"Mistakes, simple mistakes. It was the same case when we met Zamalek in the first leg and the second leg as well. We have to work hard. We have to learn from our mistakes because we cannot keep repeating the same errors every now and then," said a visibly aggrieved Matano.

The veteran gaffer, however, tipped his charges to bounce back stronger in their subsequent encounters.

"Tusker have never won their first two matches of the season in the past so we still have a chance to recover. We shall come back strongly," he said.

As Matano mourned his second loss, his opposite number Ken Kenyatta was full of praise for his newfound gem Francis Kahiro. "Kahiro is a young boy and he has made it clear he has a bright future," said Kenyatta.

"We trained to win so I think we were prepared for this and I'm happy we have managed three points. We need to work harder so that we can be somewhere irrespective of who we are," said Kenyatta

The visitors snatched an early lead after Kahiro pounced on a lose ball to break the deadlock in the 10th minute.

However, Jackson Macharia tapped the ball in with his knee from close range to draw his side level in the 56th minute before Kahiro grabbed the winner six minutes later.

Elsewhere, Gor Mahia head coach, Mark Harrison, urged his players to maintain the momentum that has propelled them to three consecutive league wins this season.

The record champions moved second on the log after an emphatic 2-0 win over rivals Kariobangi Sharks at Kasarani Annex on Tuesday.

The  British gaffer, who once plied trade for English Premier League side Southampton, extolled his charges for exhibiting great character that saw them surmount their resilient rivals.

"The boys made a good effort in the match. Obviously, Sharks tried pressing us high  given we usually play from the back, but credit to the team. We just have to keep going in the right direction the way we have done so far," Harrison said.

"Gor Mahia displayed good maturity throughout the match. I think we had a chance to stop the two goals yet we didn't," said Muluya. Gor are now level on nine points with leaders Nairobi City Stars, albeit, with a game in hand.

Striker Benson Omalla blasted the back of the net in the  12th minute to fire himself to the apex of the top scorers' chart with 4 goals.

But it was Peter Lwasa who stole the limelight after coming back to haunt his former side with a superb 83rd-minute strike.