• Bayern, who have now scored 12 goals in their three games and have conceded none, are top of Group E on nine points 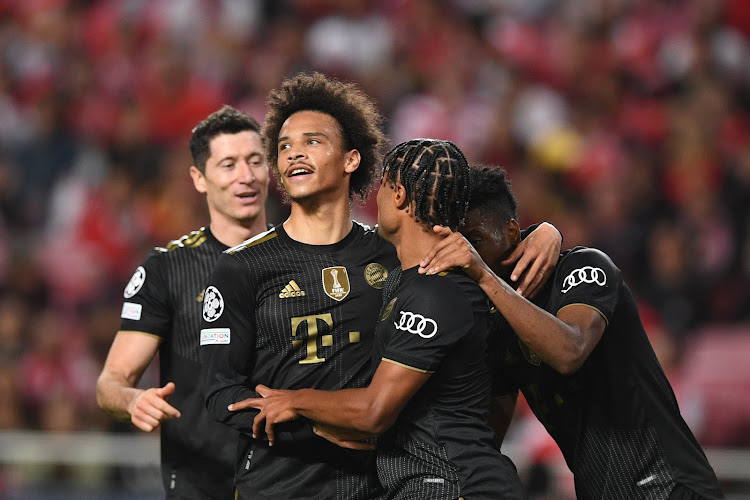 Leroy Sane (C) celebrates with teammates after scoring a goal during their UEFA Champions League match against Benfica at the Luz stadium in Lisbon on October 20, 2021.
Image: AFP

Bayern Munich struck four times in a frantic 15-minute spell late in the second half to cruise past Benfica Lisbon 4-0 on Wednesday and make it three wins out of three Champions League Group E matches.

Leroy Sane whipped in a fierce free kick in the 70th minute and drilled in his second in the 85th after Benfica substitute Everton headed in an own goal in the 80th and Robert Lewandowski bagged their third goal two minutes later.

The Bavarians, with coach Julian Nagelsmann missing with a flu and being replaced by his assistants, had earlier hit the woodwork and also had two efforts disallowed.

But Benfica had their share of golden opportunities in an entertaining game before eventually running out of gas after the 70th minute.

Bayern, who have now scored 12 goals in their three games and have conceded none, are top of Group E on nine points, with Benfica in second place on four. They are also unbeaten in a record-extending 20 consecutive Champions League away games.

“We played a very good game, even in the first half but we could have been a bit better in our finish,” double scorer Sane said.

“We knew Benfica would be aggressive and go to one-on-ones so we just had to be patient and play our game. I have been training these free kicks quite a bit and am happy this one went in. We are always hungry and that is our strength.”

Some 14 months after winning the Champions League title there, Bayern, with assistant Dino Topmoeller in charge, returned to Lisbon’s Da Luz stadium and went in search of an early goal with chances missed by Sane and Lewandowski.

Benfica gradually balanced things out and forced Bayern keeper Manuel Neuer, making his 100th appearance in the competition, to a fine save before Lewandowski put the ball in the net just before the break only to have his effort cancelled for hand ball.

Benfica keeper Odysseas Vlachodimos then denied them two minutes after the restart, deflecting Benjamin Pavard’s powerful shot onto the post.

Minutes later Bayern thought they had finally scored when Thomas Mueller tapped in on the rebound after a solo effort down the wing from man-of-the-match Kingsley Coman. But a VAR review ruled out the strike as Coman was deemed to be offside.

It was by no means one-way traffic with Neuer again making a superb stop in the 55th, palming a curled Diogo Goncalves shot wide with his left glove. Roman Yaremchuk also came agonisingly close, with his shot a little later sailing just wide of the far post.

But it was Sane who broke the deadlock, whipping his 70th minute free kick in before they scored three more times in a rampant finale to remain on course of a spot in the knockout stages.