Will Harambee Stars bounce back from Mali rout in Morocco?

Turkish gaffer Engin Firat is expected to tinker his lineup for better results after the decision to play key players out of their usual positions proved disastrous. 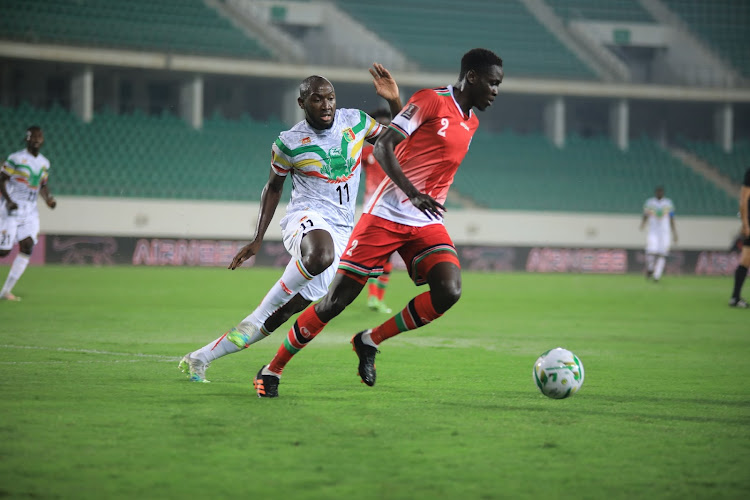 Kenya's national football team, Harambee Stars, will look to bounce back from their heavy 5-0 loss to Mali in Morocco on Thursday when the two teams square off in the return leg at Nyayo Stadium on Sunday.

The dejected Kenyan contingent made a low key return to the country on Friday afternoon with the technical bench too timid to field questions from local journalists.

In Thursday's encounter, Ibrahima Kone was the toast of the day, bagging a hat-trick with Adama Traore and Moussa Doumbia netting a goal apiece to complete the rout.

The last time Kenya suffered such a terrible humiliation was during the 2006 World Cup qualifiers against Morocco in 2005 where they crashed 5-1 in Rabat.

Following the outcome, Mali have cemented their position at the top of Group E with seven points, ahead of Uganda who have five after pipping Rwanda 1-0 in Kigali on Thursday. Kenya and Rwanda have two and one respectively.

Les Aigles have amassed six goals from their two encounters, five of them reaped from the Kenyan basket. The Malians edged Amavubi Stars of Rwanda 1-0 in Kigali before holding Uganda 0-0 in Kampala.

Turkish gaffer Engin Firat is expected to tinker with Stars' lineup for better results after his decision to play key players out of their usual positions proved disastrous.

The Kenyan lads looked entirely at sea as they struggled to master their new and unfamiliar roles. For instance, Simba SC centre-back Joash Onyango featured at right-back and had to be withdrawn later in the first half after a bad day in office.

Only Joseph Okumu, Johnstone Omurwa and Kenneth Muguna were handed their usual roles in the tie.

So terrible was the performance that for the first time in many years, the goalkeeper had to be substituted for a reason other than injury when Ian Otieno made way for Farouk Shikhalo after letting in four goals in the first half.

Firat realised, albeit late, that this was not the right occasion to experiment with the lineup and, perhaps, on Sunday he may have to seek guidance from his assistants William Muluya and Kenneth Odhiambo who have been with the squad comparatively longer.

The squad failed miserably in their efforts to string together meaningful passes.

Kenya's mathematical chances of progressing through now remain slim after the loss and they must now unleash all their arsenal to gather maximum points in their three remaining encounters.