Can Barca’s shining light Gavi be the future for Spain too? 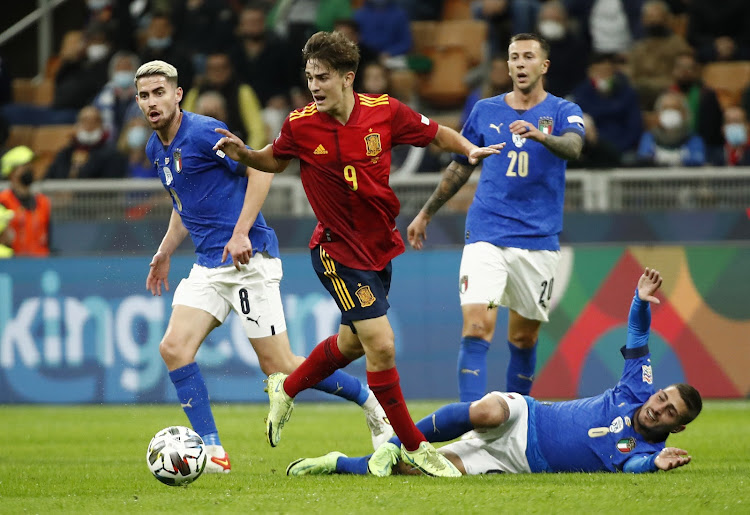 When 17-year-old midfielder Gavi took to the field for his Spain debut against Italy in the Nations League on Wednesday it was for only the eighth senior appearance of his entire career.

But during the 83 minutes he was on the pitch in the 2-1 semi-final win, he played like someone with 20 times that number under his belt.

Barcelona fans had already seen evidence of his stellar close control, ability to run with the ball and a positional awareness and ability to find space that belies his years in the seven games he has played for their senior side.

But in Milan he brought that to a higher stage, undaunted and at times untouchable against the reigning European champions on a ground at which they had never lost.

“We’re talking about a rare case in Gavi,” said his national team boss Luis Enrique after Wednesday’s game. “He is playing on the pitch like as if it’s the backyard of his house. He’s the present and future of the national team.

“He’s a player who can play between the lines, doesn’t lose ball, has good technique, and is physical. We knew what he would bring; personality, willingness to play, courage. Nothing is too much for him. He is a very complete player.”

Following his superb display at the San Siro, BBC Sport profiles a player that has just become the youngest player to feature for Spain in their history.

A native of Los Palacios y Villafranca near Seville, Gavi (or Pablo Martin Paez Gavira) was recruited at the age of 11 by Barca from Real Betis’ academy. His growth in the six years since has been rapid and impressive. The abilities on display in Milan have been clear from an early age, as can be seen in a video posted by Barca last month on YouTube.

The first thing that strikes you from the collection of clips is the way he glides over the turf, his touch equally impressive with either foot. He scores from close range with his right foot one moment, lashes in with his left the next.

And the showreel also highlights a gritty quality in Gavi’s game, showing him diving into a populated six-yard box to score a brave header, followed by another goal scored with a wedge of padding shoved up one nostril to stem some bleeding.

Such backbone was on display again on Wednesday, where he repeatedly threw himself into challenges against bigger and more streetwise opponents. His four tackles was a joint high in the game and his seven fouls were the highest by a player on either side, more than double the next highest.

Such a quality, coupled with a growth in his physical stature have seen him make quick progress in the last two seasons.

He went from under-17s straight to under-19s football — a rare transition for a player at La Masia — and made only three appearances for the club’s B side before graduating to a first team in dire need of spark and longing for a new homegrown hero.

Barca’s financial woes are well documented, their loss of talismanic academy-product Lionel Messi even more so, and their struggles on the pitch this season all too painfully clear to see. In the brief periods he has been on the pitch, Gavi has provided that missing spark.

Under-siege manager Ronald Koeman has said the player has already shown he “has a place in this team”.

He was man of the match in his first home start against Levante and assister of the last-minute equaliser against Granada, showing a calmness and execution that had eluded more experienced team-mates with a cross for Ronald Araujo to head in.

Against Bayern Munich in their Champions League opener, Barca were utterly outclassed in a 3-0 home defeat, but Gavi at least brought some fight to the table, getting in the face of and knocking over Joshua Kimmich, Thomas Muller and more in a fiery 30-minute cameo.

With his background, prodigious talent and name, it is no wonder people are quick to draw comparisons with one of La Masia’s greatest ever graduates, Xavi.

And with fellow teenager Nico Gonzalez emerging as understudy to Sergio Busquets and the ludicrously talented Pedri already operating in the Andreas Iniesta role, there are wildly optimistic hopes that a new version of that world-dominating triumvirate could be forged in the future. Maybe for club and for country.