Ulinzi drew the first blood through Masita Masuta on the stroke of halftime.

•Vihiga United and Nairobi City Stars played out a barren draw, the same scoreline registered in the match between Posta Rangers and Nzoia. 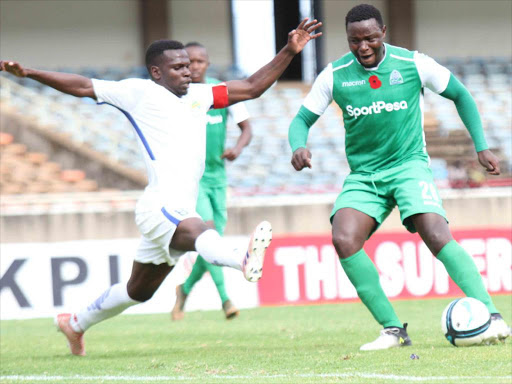 The battle for the Football Kenya Federation Premier League title has been sent to the wire after KCB edged Ulinzi Stars 2-1 at Thika Stadium on Wednesday to come to within four points of leaders Tusker.

Ulinzi drew the first blood through Masita Masuta on the stroke of halftime.

In the 51st minute, KCB earned a penalty after David Ambulu's cross was handled in the box and Derrick Otanga gladly stepped up to send James Saruni the wrong way for the bankers' opening goal.

Striker David Simiyu then doubled the bankers' advantage minutes after being introduced into the affair.

Eric Kapaito stepped up and converted from the spot to put Kariobangi Sharks ahead in the 21st minute after he was sent tumbling down in the area. The striker effectively took his tally this season to 21, heightening his chances of bagging the golden boot.

Then in the 71st minute, Robert Onyango latched onto Odede's pass and made no mistake as he sent the ball rolling past onrushing Gor custodian Gad Mathew.

The loss has left Gor in fifth with 40 points, three behind arch-rivals AFC Leopards.KCB beat Ulinzi Stars 2-1 to close in on leaders Tusker.

The outcome has propelled the bankers to 51 points, leaving them four adrift of the  brewers, effectively driving the title duel to the wire.Sharks have risen to third where they sit pretty with 44 points.

Vihiga United and Nairobi City Stars played out a barren draw, the same scoreline registered in the match between Posta Rangers and Nzoia.