To help nurture budding talent back in his village, the KDF officer has opted to work closely with a local organisation, Sports for Peace, which was established to curb community vices through sports.

•Ranked third in Africa, Pkemoi narrowly failed to qualify for the Tokyo Olympics, jumping 16.84m  at the national trials

•Nonetheless, the KDF officer (no pun intended) continues to soldier on with efforts to uplift the status of his community through sports

• Sports for Peace's objective is well captured in their motto: ‘shoot to win, not to kill' During the Athletics Kenya's national trials for the 2020 Tokyo Olympics, all eyes were fixed on one particular triple jumper.

After a string of impressive outings at various competitions that saw him rise to third in Africa’s rankings, the stakes were high for Gilbert Pkemoi as Kenyans expected him to attain the elusive mark that would have secured him an Olympic slot.

However,  Pkemoi fell short of achieving his dream to compete at the Olympics.

We caught up with the towering athlete for an interview who, in the midst of all the disappointment, placed his debacle right at the feet of inadequate preparations.

“I could have performed much better if I had a great coach to take me through my paces. I’ve been training all by myself and that has made it difficult for me to attain the Olympics qualification mark,” he said dejectedly.

Born on October 3, 1997 at Komol Village in West Pokot county, Pkemoi  cut his teeth as an athlete while participating in inter-school competitions during his formative years.

Upon graduation, he proceeded to join Keringet Secondary School between 2011 and 2014

“I would compete in almost all the inter-school games both in primary and high school, and my teachers would urge me on saying I had great potential to make it to the national stage,” said Pkemoi.

Despite falling short of his objective at the trials, Pkemoi held on to the glimmer of hope he would still somehow find his way to Tokyo.

Frantically, he registered for trials in Nigeria the following week but again fate denied him an opportunity to make it to Abuja after he failed to raise enough money for the air ticket.

“I’m not one to give up so easily. Otherwise I wouldn't have come this far. I have endured many tribulations to achieve my current status and I believe one day I will grace the Games,” said Pkemoi. 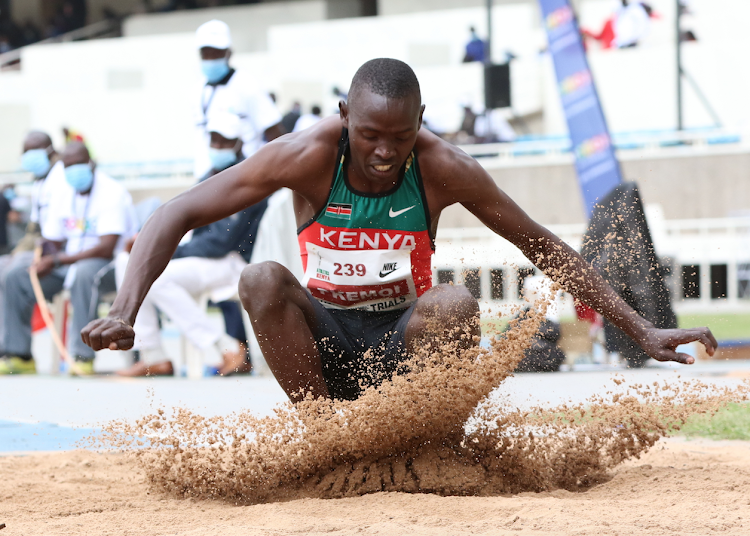 DOWN TO EARTH: Pkemoi completes a routine in triple jump during the national trials for the Tokyo Olympics.
Image: ERICK BARASA

One needs to understand Pkemoi’s background to appreciate the great effort he has put in place just to attain his current status.

Indeed, if Pkemoi had been one to throw in the towel so easily, perhaps he and his age-mates would now be involved in cattle rustling back in their village.

He, however, chose to be remarkably different.

Interestingly, Pkemoi started off on the track in the 800m and 1500m. He was to prove his mettle at the 2014 Youth Olympic Games in Nanjing where he clinched the 1500m race.

“In 2013, I qualified for the East and Central Africa Games in Uganda where I attained 15.24m in the triple jump. Then in 2014, I did decathlon up-to the nationals at Shimo la Tewa in Mombasa where I emerged second," Pkemoi says.

The father of one, who is married to Beatrice Chesista, urges Kenyan  athletes to lace their dreams with passion if they wish to attain greater heights.

“Firstly, it's important to pursue something you are passionate about. With that, you can easily propel your dreams to the sky. All in all you need to burn the midnight oil. Nothing comes easy,” he says.

To help nurture budding talent back in his village, the KDF officer has opted to work closely with a local organisation, Sports for Peace, which was established to curb community vices through sports.

Sports for Peace's objective is well captured in their motto: ‘shoot to win, not to kill.’

The whole concept revolves around the conviction that if members of the communities involved excel in sports, then they will be able to afford their own herds of cattle and won't have to steal and harm their neighbours through cattle-rustling.

The organisation’s director, Irene Limika, says they are more focused on sports development, sports promotion and peace, carried out under the auspices of two projects: Global Athletes For Peace and Arrows Of Love Series.

Some of the games the organisation is keen on promoting — especially in marginalised areas — include archery, athletics and football.

“We have purposed to encourage cattle rustling hotspots, marginalised and riparian communities to move from a lifestyle of shooting to kill (cattle rustling) and other social ills to a more amiable shooting for community unity in diversity,peace, love and prosperity,”  Limika says.

“Since independence, Kenya has been battling, the issue of cattle rustling, through disarmament. Now we have got the long-term solution and alternative,to end cattle rustling in Kenya,and that is through archery and other sports,” she adds.

She points to the fact that Kenya has previously sent archers to the Olympics, World Championships, Commonwealth Games and African championships as evidence of the abundance of talent in the country.

The organisation has so far partnered with Olympics Kenya and the Ministry Of Sports to make impact. 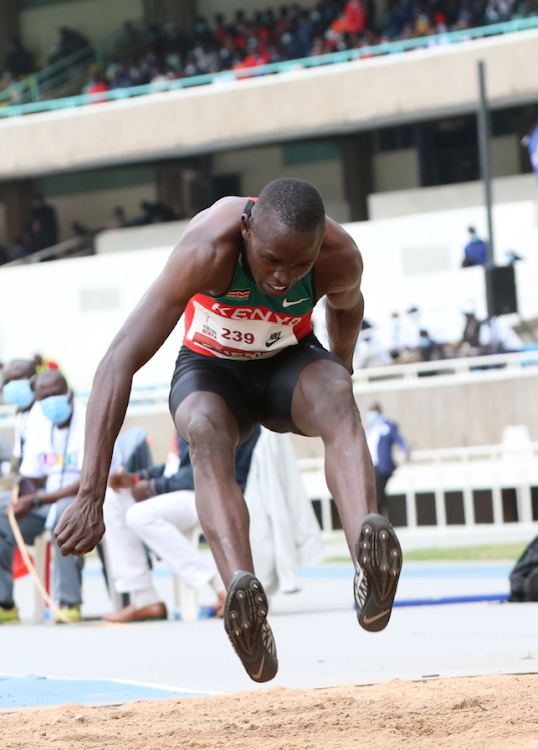 Pkemoi at the national trials for the Tokyo Olympics.
Image: ERICK BARASA

Archery is the art, practice, or skill of propelling arrows with the use of a bow.

Historically, archery has been used for hunting and combat, while in modern times, its mainly a competitive sport and recreational activity.

“We are focused on talent scouting, promotion, development and global exposure with the aim of all round socio-economic transformation,” Limika, herself a West Pokot native, says.

Limika says they are keen to help the youth understand they can use their talent to better their lives and do important things to transform the society.

“The archery tournaments are gender sensitive and will give a chance to girls to hold and use arrows and bows in the male-dominated activity. We are also keen on supporting the education of boys and girls from poor backgrounds through sponsorships and establishment of educational support,”  Limika says.

The organisation has subsequently expanded the archery league to more marginalised areas in other counties, which are affected by cattle rustling, including Kajiado , West Pokot, Baringo, Isiolo, Elgeyo Marakwet, Turkana and Narok.

She bemoans the impact of cattle rustling on her community in terms of increased criminal activities and small arms proliferation.

“This undermines development and has caused multiple deaths among rural communities and security forces. Due to long exposure to hardship and war/cattle rustling related consequences, many children and youth became traumatised, violent, aggressive, hostile and unsociable,” she says.

Limika adds: “ Cattle rustling has denied them the opportunity to acquire life-skills training, rendering them vulnerable to high unemployment rates; a condition that has precipitated unacceptable negative social activity that eventually threatens social order of the affected communities.”

Consequently, many idle youth are  easily absorbed into the wars and other criminal activities.

The participation of the youth in these cattle rustling activities has made peace a hard thing to attain.

Nonetheless, Limika, Kwemoi and Sports for Peace continue to soldier on with their desire to enable boys and girls in marginalised communities realise their potential in an area often compared to the Wild West in terms of lawlessness.

At least, this time round the youth are an important stakeholder in efforts to bring peace — unlike other initiatives of the yesteryears.

“While it is commendable that attempts to achieve peace in the state have been initiated by various groups, it is worth noting that much needs to be done. Previous peace initiatives have tended to ignore the youth and concentrated on other groups with the communities in the county,"Limika says.