“We played well only that we were not fortunate enough to win,” lamented Nyangweso.

•Coastal darlings, Bandari, walloped a hapless Sigalagala TTI side 5-0 at Utalii Grounds to set a date with Equity in the quarterfinals.

•In another match, AFC Leopards overcame Bungoma 4-2 to book a date with Tusker in the quarterfinals. 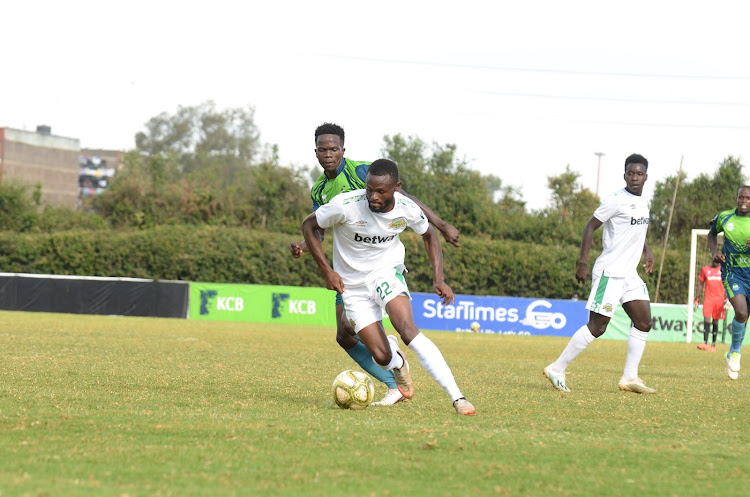 Julius Masaba of Kariobangi Sharks vies with Baraka Badi of KCB during their Betway Super Cup Round of 16 match at Utalii Grounds on Sunday.
Image: /HANDOUT

Nairobi City Stars are keen to decorate their cabinet with a maiden major silverware and will do all in their power to clinch this year's Betway Super Cup, head coach Sanjin Alagic has said.

Alagic made the remarks after his charges cruised to an emphatic 2-0 win over Ulinzi Stars at Ruaraka Grounds on Sunday.

“I'm extremely happy with the outcome. Beating a team like Ulinzi is not easy. I wish to congratulate my players for putting up such a brave fight. With that kind of spirit, we stand a chance of advancing to the semis. We still need to keep our focus intact though, given that Cup matches are always hard because there is no second chance,” said Alagic.

On the other hand, a visibly disheartened Benjamin Nyangweso said fate reared its ugly head to deny them victory on a day they needed it most.

“We played well only that we were not fortunate enough to win,” lamented Nyangweso.

Nicholas Kipkirui broke the deadlock in the 32nd minute after rising unmarked to head in Anthony Muki’s delivery from a setpiece.

Davis Agesa extended City's advantage from a grave howler on the stroke of halftime when James Saruni spilled the ball, finding the striker strategically placed to put it in.

But Ulinzi made better opportunities in the second half, Joseph Njuguna unable to reach Brian Birgen’s cross and Steve Njuge making a sharp late save from Machika’s header.

Coastal darlings, Bandari, walloped a hapless Sigalagala TTI side 5-0 at Utalii Grounds to set a date with Equity in the quarterfinals.

Benjamin Mosha opened the floodgates in the third minute and netted again in the 36th minute, with Lugogo Wilberforce, Mwamba Guelord and Oluoch Cleophas each scoring in the 20th, 51st and 90+1 minutes to complete the rout.

Kenyan champions, Gor Mahia, survived a first-half scare to squeeze a narrow 2-1 win over a resilient Division One side, Mara Sugar at Ruaraka Grounds.

Gor took an early lead through South Sudan international Tito Okello but Reuben Okoth converted from the spot on the stroke of halftime to restore parity after hero-turned-villain Okello handled the ball in the box in a futile attempt to clear  looming danger.

Mara tactician Steve Biko was forced into an early change when he introduced Collins Owila for Permanas Ocholla, who suffered a concussion following a mid-air collision with Geoffrey Ochieng.

Gor Mahia emerged from the break more determined and a minute after restart, they won a setpiece about 20 yards out. Kenneth Muguna capitalised on it to smash the back of the net for K’Ogalo’s second.

In the 62nd minute, Okello limped out of the pitch with a nasty injury to make way for Jules Ulimwengu.

As the game wore on, second-half substitute John Macharia gave an exhibition of athleticism, setting up Ulimwengu with a neat pass, but then the Burundian scuffed wide from 19 yards.

“Playing eight games in 20 days is not easy. We dominated, we created chances and I'm happy we are through,” said Gor coach Vaz Pinto.

Mara Sugar coach Steve Biko said he was satisfied with his team's performance.

“My boys played well. We gave Gor a run for their money," said Biko.

In another match, AFC Leopards overcame Bungoma 4-2 to book a date with Tusker in the quarterfinals.