No room for favouritism in national team - Mulee

The veteran tactician assured players they'll always been afforded game time as long as their performance is up to scratch.

•He singled out AFC Leopards center back Clyde Sineji rising up to the occasion away to Togo in Lome.

•The defender was handed a last-minute call-up a day to the trip after Wazito's Johnstone Omurwa picked a straight red card against Egypt on Thursday. 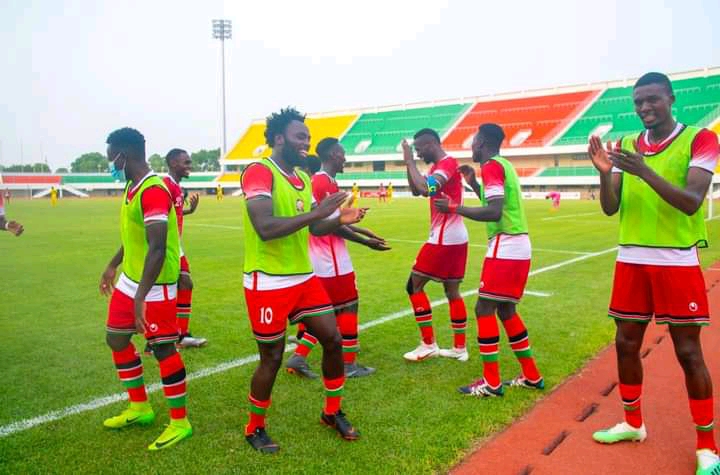 Harambee Stars bench join captain Masud Juma in celebration after he converted from the spot to put double Kenya's lead in their Afcon qualifier clash against hosts Togo in Lome on Monday.
Image: COURTESY

Speaking during a luncheon hosted for the national team at a Nairobi hotel on Tuesday, Mulee extolled local-based players for proving their mantle during the last two African Cup of Nations qualifiers against Egypt and Togo.

"We have some tough assignments ahead of us in the World Cup qualifiers against Mali and Rwanda but signs of times are already there because the team, it doesn't matter whether you are playing abroad or at home.

The veteran tactician assured players they'll always be afforded game time as long as their performance is up to scratch.

He singled out AFC Leopards centre-back Clyde Senaji for rising up to the occasion away to Togo in Lome.

The defender was handed a last-minute call-up a day to the trip after Wazito's Johnstone Omurwa picked a straight red card against Egypt on Thursday.

"I believe talent is talent. I'm very proud of our local boys for the job they've done and also of the Football Kenya Federation Premier League that gave us an opportunity to select good players.

"If you are a good player and you are in a tough league, you can be called to play for the national team anytime.

"That's the attitude we want to cultivate in our players. That anytime you can be called for duty. You just need a passport and with the federation,  it will only take you two hours to get one.

In what then appeared to be a thinly veiled warning, Mulee asked the squad members to battle tooth and nail to protect their space given selection of the national team will largely depend on a player's current form.

"There is no one who is indispensable. Even me as the coach, if I don't give the desired results, the door is wide open.

Mulee sent a passionate plea to local football fans to stick their heads up for the team through thick and thin.

"I thank fans for supporting the team. When you read what is always written about the Harambee Stars on the social media, there are a lot of stories—some good, some bad and you can even write a whole book," he concluded.

Football Kenya Federation president Nick Mwendwa was confident the team would continue experiencing a rise in the curve.

"You can see that this is the first time we have registered an away win since 2013 when we beat Seychelles in an Afcon qualifier and in 2015 when we saw off Mauritius in the World Cup qualifiers," said a visibly elated Mwendwa.