Klopp said he is expecting striker Diogo Jota to return for the Chelsea game.

•“What we created was very good. The finishing was good enough for today, but we can improve.”—Klopp

•Sheffield United goalkeeper Aaron Ramsdale had a superb first half and there was little he could do to stop the two goals, but he was disappointed at the final whistle. 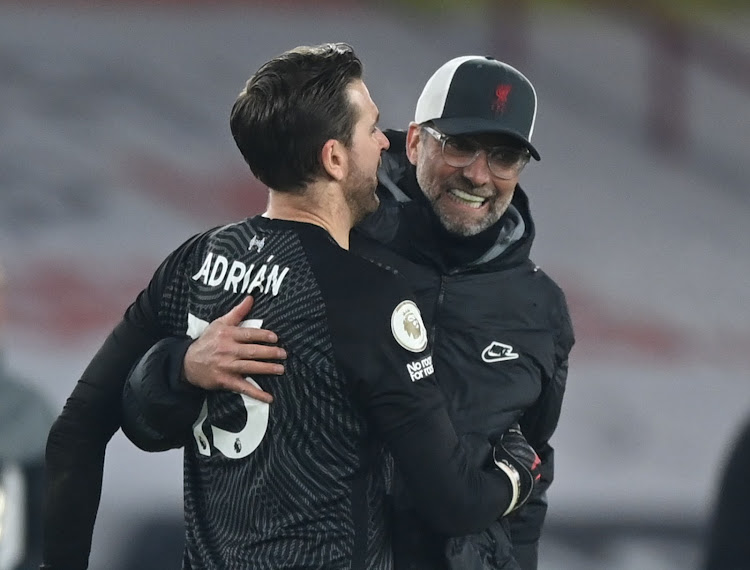 Liverpool boss Juergen Klopp is setting his sights on Champions League qualification after his side finally got back to winning ways with a 2-0 win over Sheffield United that brought a run of four straight Premier League defeats to an end.

Klopp’s side struggled in front of goal but a Curtis Jones strike and a Kean Bryan own goal gave the sixth-placed Reds a much-needed win ahead of their midweek showdown with Chelsea, who are one place above them in the table.

“This was about us showing we’re still there. We play Chelsea on Thursday, we have to show it again. We have to win football games, we know that. There’s no way into the Champions League without results. Tonight we got it, we keep going,” Klopp told Sky Sports.

“Sheffield United have lost a lot but all by the smallest margin. It’s clear these games stay exciting until the very end. We could have scored three in the first half,” the German coach explained.

“What we created was very good. The finishing was good enough for today, but we can improve.”

Klopp said he is expecting striker Diogo Jota to return for the Chelsea game. The 24-year-old has recovered from a knee injury and was in the squad to face Sheffield United, but withdrew due to illness.

Sheffield United goalkeeper Aaron Ramsdale had a superb first half and there was little he could do to stop the two goals, but he was disappointed at the final whistle.

“We gave everything tonight. For the first half and most of the second half we gave a good account of ourselves,” he told Sky Sports.

“They are world-class players and can do that to any team. It’s definitely a disappointed dressing room because we could possibly have got something out of that.”

Elsewhere, a bad week for Leicester City got even worse as manager Brendan Rodgers said winger Harvey Barnes needs knee surgery and will be unavailable for six weeks.

The 23-year-old was carried off on a stretcher shortly after halftime in his side’s 3-1 home defeat by Arsenal on Sunday.

“I just spoke to the doctor. That’ll be a huge blow for us,” Rodgers said. “It’s not good news. He needs an operation.

“He’ll be out for a minimum of six weeks. Part of the bone in his knee has come off, so he’ll need it repaired. “He’s had niggles with it. We tried to recover him on Thursday but it’s a bad one for him.”

Barnes has been one of third-placed Leicester’s most influential players this season and his absence will hurt them in their quest to nail down a place in the top four. Sunday’s double blow comes after Leicester were knocked out of the Europa League by Slavia Prague in midweek.