'I DON'T HAVE POWER AND INFLUENCE'

His clients include some of the game’s biggest stars, from Paul Pogba and Zlatan Ibrahimovic to Erling Braut Haaland and Marco Verratti.

• European football’s top clubs are facing billions of pounds of losses as a result of the Covid crisis, but Raiola rejects the suggestion that top players’ wages and transfer fees — and therefore agents’ commissions — will suffer as a result.

• Raiola sparked a major backlash in December when, just before a crucial Champions League match for Manchester United, he suggested Pogba’s time at Old Trafford could be over. 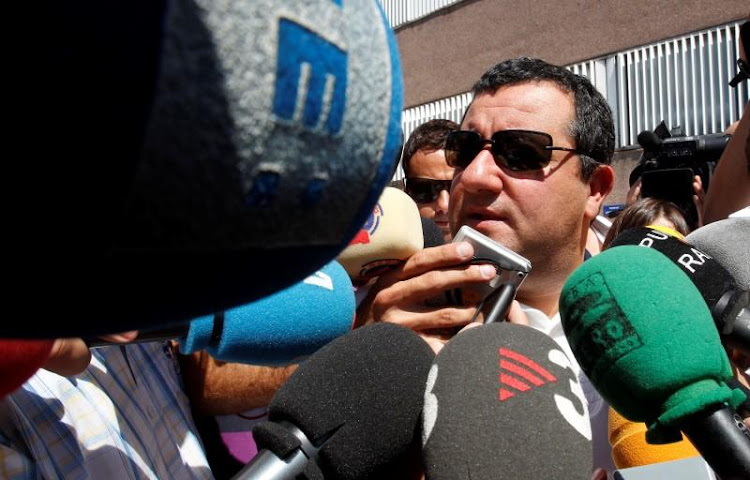 ‘Super-agent’ Mino Raiola has become one of the most controversial and influential figures in world football.

His clients include some of the game’s biggest stars, from Paul Pogba and Zlatan Ibrahimovic to Erling Braut Haaland and Marco Verratti.

But with the sport facing an unprecedented financial crisis because of the coronavirus pandemic, there is mounting scrutiny on agents, and the vast sums they can earn from transfers. On a host of issues, however, Raiola is vowing to challenge the game’s authorities on behalf of his industry.

European football’s top clubs are facing billions of pounds of losses as a result of the Covid crisis, but Raiola rejects the suggestion that top players’ wages and transfer fees — and therefore agents’ commissions — will suffer as a result.

“I don’t think there is a correlation,” he told BBC Sport from his office in Monaco. “For extraordinary talents, there is always space.”

One such talent is Borussia Dortmund’s 20-year-old striker Haaland, one of the hottest properties in the game, and among 70 players on Raiola’s books. The Norwegian joined Dortmund just over a year ago but has been linked with a big-money move this summer, and the agent says a host of Premier League clubs could sign him.

“It is obvious that everybody is looking at Erling as one of those potential new future stars because it’s so difficult to do what he does at his age at his level,” he said. “He will be one of the future stars of the next decade because we see that stars such as Ibrahimovic, Ronaldo and Messi are coming to an age where everyone asks themselves: ‘How long can we still enjoy them?’ So everyone is looking for the new generation.

“Only a maximum of 10 clubs can afford to buy [Haaland] and give the platform you would like after you’ve been in Dortmund… and four of those clubs are in [England]. I don’t think there’s a sports director or trainer in the world who would say ‘not interested’. It’s like saying: ‘Is there a Formula 1 team who would not be interested in having Lewis Hamilton?’”

Raiola sparked a major backlash in December when, just before a crucial Champions League match for Manchester United, he suggested Pogba’s time at Old Trafford could be over.

“I just expressed an opinion, I didn’t want to cause any problem,” Raiola said. “I don’t think that it destabilised anybody, because they had a fantastic run and they were even first, for a period, in the league. You think big players like Paul Pogba - or [Ole Gunnar] Solskjaer, who won everything in his life — get destabilised by what Mino Raiola says? Come on, please. But I don’t talk about it any more. It makes life a little bit boring, but it is what it is.”

The outspoken Raiola — who has also represented Belgium striker Romelu Lukaku, Italy forward Mario Balotelli and Netherlands centre-back Matthijs de Ligt, has had run-ins with a series of other managers, including Sir Alex Ferguson, Pep Guardiola and Jurgen Klopp, but says he has learned lessons.

He said: “Whenever I tell my opinion, everyone in England goes berserk, and I am the worst agent or the best agent…and the clubs get so stressed from the public and journalists that I have learned not to talk much about it.”

Claims that Raiola earned £41m from Pogba’s world-record £89m transfer from Juventus to Manchester United in 2016 intensified criticism of agents. But he insists the perception of greed and excess is unfair.

“It’s not nice always to hear this same preconception,” Raiola said. “But maybe the public can also think: ‘If this man is so greedy and so bad, how are his players all happy and stay with him? I would be lying if I said it didn’t bother me…how can you judge if I was a good agent for Ibrahimovic? The only one who can judge that is Ibra himself.”

“I don’t have power and influence… my job is to get the best deal done for my player. And no more than that. And doing that is to provide him with a whole range of services that people don’t even know. My players don’t call me a parasite, and that’s who I work for. I only care what my players call me.”

Fifa is bringing in new regulations this year, which will see the publication of the money agents receive from their clients, caps on commissions, a licensing system, and a clampdown on conflicts of interest. Football’s world governing body has said that deregulating agents in 2015 was “a mistake”, and it wants to tackle “abusive and excessive practices”.

Raiola — who is president of the Football Forum, an organisation set up to represent the interests of leading agents and their players - is vehemently opposed.

“We are not talking to Fifa any more,” he said, criticising the extent to which agents had been consulted on the new proposals. “I think at the end, there will be a court case. I have no problem with any transparency. There are governments that check us fiscally, legally every day.

“What we have a problem with is the people that don’t know how a transfer works, trying to make rules that are ridiculous.”

Raiola says the crackdown on agents has been “used by Fifa to hide their own problems”.

He said: “Yes we need to change the football world, but we want to be a part of that, to be respected, because our job is to represent the players and their interests.

“We’re not saying we are perfect, but it cannot be regulated by Fifa. Nobody looks at the interest of the player in this. There’s only an interest [in] saying: ‘Let’s attack the agents because they took too much money out of the game.’”

In a statement, Fifa said it had conducted “a very robust consultation process” including with agents organisations.

The governing body said: “Fifa has observed widespread conflicts of interests, and a market-driven by speculation rather than solidarity and redistribution across the football pyramid.

“Fifa has the responsibility to address and regulate these matters. We are aiming for a system of balanced and reasonable regulation, instead of the law of the jungle currently in place.”

Raiola has been a fierce critic of the English Football League’s salary caps in Leagues One and Two and praised the scrapping of them earlier this month following what he called a “logical” decision by an independent arbitration panel.

Raiola insists deep-rooted problems with football’s financial sustainability pre-date the pandemic, and those radical ideas should now be considered.

He said: “I would like to give clubs the possibility [over] the next three years, because of Covid, to maybe find a system wherein some countries [they] say, ‘Listen, you know what, let’s not relegate any more’, to have a more stable environment to build your reserves. In France, Spain, and Italy, it is a real financial disaster if you go down. And that puts clubs in a stressed position, where maybe they cannot make a decision for the future but based only on the short term. The total system has to be looked at.

“In the Football Forum, we are not there to kill clubs. We should try to be more modern and to sit down with all involved parties and to see where is it that we can help each other.”