WHAT NEXT FOR KIMANZI AFTER STARS?

•His role was taken up by veteran tactician Jacob ‘Ghost’ Mulee as both the federation and Kimanzi held on to the position that they had parted ways on mutual agreement.

•It was not the first time Kimanzi lost grip on the national team. He has been in that unenviable position before. Coach Francis Kimanzi and his assistant Salim Ali during his days at Mathare United
Image: /FILE

Francis Kimanzi is a man with a heart of steel. Widely known by the nickname ‘Kim’, the immediate former Harambee Stars’ coach has endured many tribulations in his stellar coaching career spanning almost two decades now and has become accustomed to losing jobs as frequently as he finds them.

Kimanzi found himself in the thick of things once again when he was handed yet another shocker of his career following a decision by the Football Kenya Federation (FKF) to terminate his contract as national team coach, the move a bit surprising and coming exactly a fortnight after he had proved his mettle by leading his charges to an impressive 2-1 win over the fancied Chipolopolo of Zambia at the Nyayo National Stadium.

His role was taken up by veteran tactician Jacob ‘Ghost’ Mulee as both the federation and Kimanzi held on to the position that they had parted ways on mutual agreement. Still, questions abound why the changes were carried out hastily only a couple of days after Nick Mwendwa had been re-elected to a second term in office.

It was not the first time Kimanzi lost grip on the national team. He has been in that unenviable position before.

We sought to engage him days after his departure and fortunately caught up with him for a lengthy conversation that lasted almost an hour as he let us in on his illustrious career both on the pitch as an industrious fullback and on the touch-line as an adept tactician. 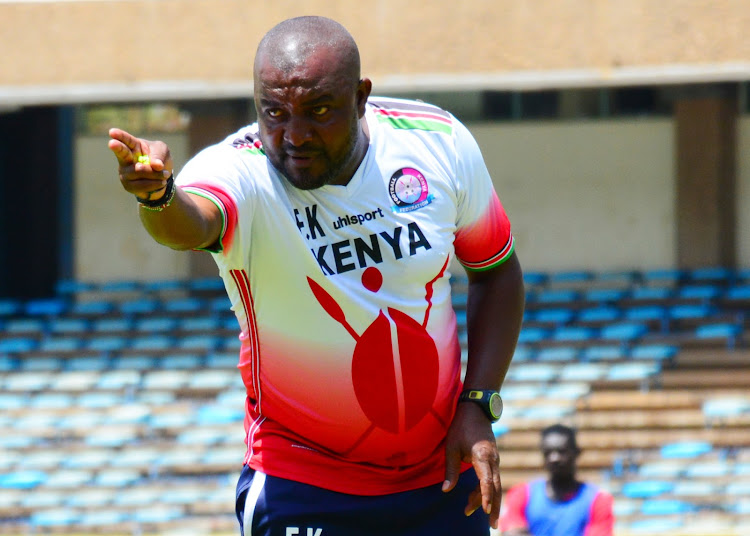 Born on May 29, 1976, Kimanzi developed interest in football at the tender age of 9, sharpening his skills while turning out for St. Theresa’s Sportiff at Mlango Kubwa Eastleigh which neighbours the sprawling Mathare Slums in Nairobi. There, they kicked several improvised balls made of plastic bags and twine.

Kimanzi and his teammates would, however,soon get an opportunity to play with real balls after sports enthusiast Bob Munro landed in the country from Canada and established Mathare Youth Sports Association (MYSA).

After visiting the area and observing the barefooted children enjoying a game of football in the dusty fields for a while, Munro decided to reach out to the young ones in an effort to guide them through their dreams and offer them an opportunity to explore their potential to the highest level of the game. A couple of days later, he met with some young leaders in the slums and they agreed to start organising a few youth leagues.

Kimanzi and his peers who were now part of the organisation, would get rid of the huge piles of uncollected garbage which were major causes of disease and deaths in the slums as environmental clean-ups became an integral part of all MYSA leagues. As a reward, their teams would get three points for a victory, and earn six points for each completed clean-up project.

MYSA thereafter formed a select team comprising the best players drawn from the U-12 league and Kimanzi was appointed captain, a post he held all the way up to the Kenyan Premier League when the team beat all odds to gain promotion to the top tier, by which time he had already consolidated his position as a right fullback.

Kimanzi attended Highridge Primary School, where he sat for his Kenya Certificate of Primary Education (KCPE) exams in 1988. He proceeded to high school where his interest in football flourished. It was during this period that he frequently featured for Nairobi Combined in the Coca-Cola Youth Tournament.

“I remember in this team, we had twin brothers Fred and Bill Arocho who featured as defender and striker respectively,” says Kimanzi.

On completion he secured an opportunity to travel to Norway where he pursued a course in Journalism.

The tactician said that even though his trip to Norway denied him an opportunity to join the national team, he has never regretted his decision to travel abroad because it set course for his successful journey in football.

“In 1997, Harambee Stars Reinhardt Fabisch requested to have me in his squad but was disappointed to find out that I was out of the country,” says Kimanzi.

It was at a time Fabisch de-constructed the old mentality of selecting players from the traditional Kenyan football giants and opted instead to cast his net to lower tiers.

On his return from Norway, Kimanzi entwined football with a leadership role at Mathare Youth Sports Association (MYSA), where he played a crucial part in resolving the 1999 violence at the Kakuma Refugee Camp in north-west Kenya that was sparked by sharp ethnic discordances which erupted among the over 70,000 refugees. 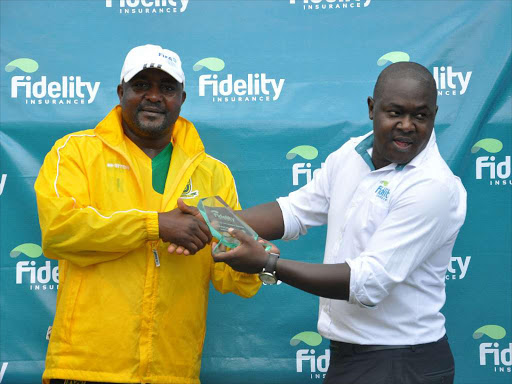 As two-thirds of the refugees were youth, the UNHCR had asked MYSA to start a similar self-help youth sport for development project in the camp. The idea worked.

Within six months the skirmishes had drastically subsided. Many youth were from South Sudan and after the 2005 peace agreement, they returned to Rumbek, the then administrative capital, where former child soldiers also demobilized. MYSA therefore helped start another project there that continues up to today.

Kimanzi played club football for Mathare United between 1994 and 2002 before shifting his focus to coaching.

He was appointed full-time manager of the Kenyan national team on December 11, 2008, after holding the post on an interim basis since May of the same year. He was axed from the post soon after the 2008 Cecafa Cup in January 2009 following unresolved differences between him and football administrators.

He later landed a job at Sofapaka and after presiding over the club for a year, he got his role back as Harambee Stars head coach in November 2011. In June 2012, he was once again sidelined alongside his entire coaching staff after Kenya failed attempt at the 2013 African Nations Cup.

He joined Kenyan Premier League side, Tusker but was only there for a season, after which he found his way back to Mathare United as head coach of the Slum Boys in 2015. His move to the side was instrumental in their sudden rise in the top flight league given that he pumped in some vigour at a time their fortunes appeared to be dwindling after a season of exhibiting mixed results under Stanley Okumbi who left to guide Kariobangi Sharks.

Then on August 14, 2019,  FKF elected to settle on Kimanzi to take over as head coach of Harambee Stars with KCB coach Zedekiah ‘Zico’ Otieno as his deputy. Until then, Kimanzi was overseeing the activities of Kenya Under-23 team. He replaced Frenchman Sebastian Migne who resigned from his post as coach after a 15-month stint in the plum but volatile job.

Kimanzi has always invested heavily in this field he seems so passionate about. After fleshing out his curriculum vitae with a professional qualification in Norway, he eventually founded Kenya Institute of Soccer Education (KISE) in Ngara Nairobi, where he took local coaches through a formal training program in partnership with the Dutch Football Association.

In fact, a big percentage of coaches guiding clubs in both the top and second tier leagues acquired their knowledge and experience from him at KISE.

Even though he has been an instructor for a long time now within which time he has moulded several local tacticians, Kimanzi says he has no qualms whatsoever with the idea of local clubs hiring foreign coaches.

“Everyone deserves an opportunity to work anywhere in the world as long as he or she has the right qualifications for the job. How would you feel if you were denied a chance to work abroad simply because you are Kenyan?” he poses. He urges budding footballers to work hard if they intend to attain greater heights in the sport. 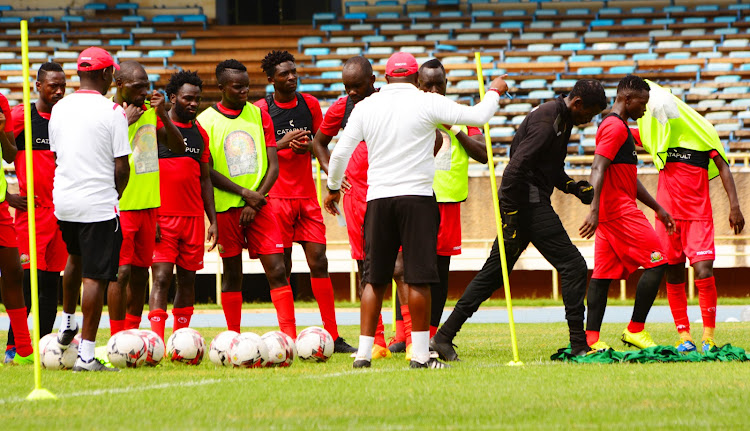 “There are no shortcuts to success. Just do your best and make good use of the available opportunities. Keep on trying.”

He further says that he doesn’t suffer mediocrity and warns those players who think they can win his heart simply because they’ve met before and know each other well to forget about it.

“I offer opportunities based on merit. I don’t believe in giving anyone preferential treatment just because we are close in one way or another. They must work to earn their slots in the teams I manage.”

Kimanzi agrees that some of the players he left behind at the national team may flourish under the new coach while others may fizzle out depending on the philosophy introduced.

“There are loads of factors that affect a player’s performance key of which is the philosophy employed by the coach. Different players thrive or flop under different coaches depending on the philosophy the coach introduces. A philosophy may either favour a player or suppress his potential,” says Kimanzi.

Asked if he left behind a good team, Kimanzi was categorical that the future of the team and its performance was now solely in the hands of his successor.

“All I can say is that I initiated a project which may either succeed or flop depending on the strategies put in place by those who have taken over itsmanagement,” he said.

What next for him after stepping down as Harambee Stars coach?

Kimanzi says he’ll be using his time to train and further his knowledge in coaching. “Offers will obviously come but right now I’m not in a hurry to take up another job,” he says.

Kimanzi was quick to wish his successor Jacob Ghost Mulee well in his new position, saying he had a lot of faith in his ability to handle the national neam. “I would like to wish him well in the same way he wished me well when I was appointed to the position a year ago,” he concluded.