Odhiambo returned to Bandari after a two-year hiatus in February

•Odhiambo reckons that there is a major difference between integrated and segregated training which his players are undergoing at the moment.

•On the same note, Bandari technical director Twahir Muhiddin reiterated that their focus in the league will not only be to beat Gor Mahia 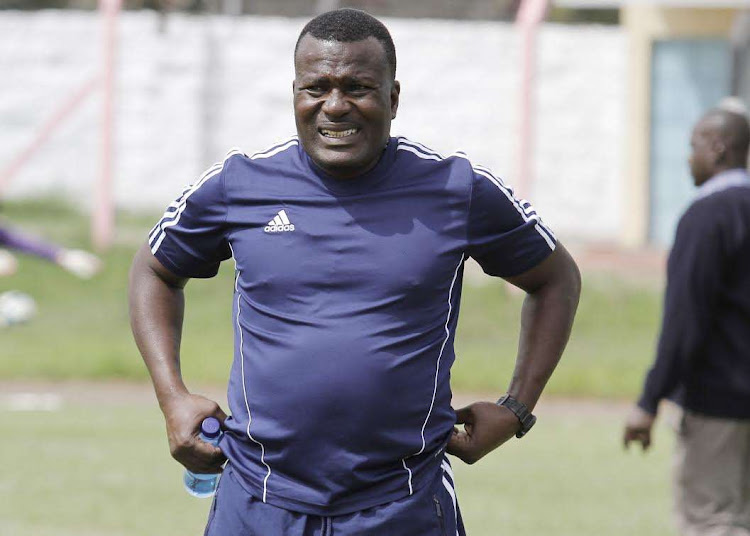 Ken Odhiambo gestures in a past match
Image: COURTESY

Following a spate of disappointing results in the 2019/20 season, Bandari FC coach Kennedy Odhiambo believes they are capable of emulating the 1965 Kenyan League champions Feisal FC who are to-date the only team from the Coast to lay hands on the coveted title when action resumes.

Odhiambo, who returned to Bandari after a two-year hiatus in February, envisages a realistic chance of winning their maiden top flight title in 2020/21 season.

He believes all is not lost for a club that racked up back-to-back second-place finishes on the KPL log and is touted among title contenders.

Bandari met their Waterloo following excruciating effects of their Caf continental football experience and were left with no choice but to send coach Bernard Mwalala packing.

“When we regroup, I hope all our players will be okay to enable us settle quickly in training. Any coach in the league wants to win and so I really hope things will get better soon so that we are back in action as we seek to win our first league title,” he said.

Odhiambo reckons that there is a major difference between integrated and segregated training which his players are undergoing at the moment.

“Since the government issued a directive to stop social gathering, we have not been training together and you really don’t know what the players are doing behind the scenes. But the good thing is that we have given them a program to train on their own,” said Odhiambo.

All has not been well with Bandari following subsequent woes of the Caf Confederation Cup which culminated into the sacking of Mwalala, whose stint was occasioned by their 1-2 defeat to Tusker FC in a top flight duel. This went down as the club’s eighth defeat in the season, dipping them to an undesirable 11th position in the 17-team league.

The coast-based team then reappointed the former Harambee Stars player Odhiambo who managed to steer them to top 10 by the time the league was stopped due to Covid-19 with Gor Mahia being awarded the title based on the first leg standings.

Mwalala’s woes were aggravated by their defeat to Guinea’s Horoya in the Caf Confederation Cup last November and they have managed just three wins since then, losing seven and drawing once.

“Step number one for me when I returned to Bandari was to address the underlying issues then restore confidence. We then went like six matches unbeaten. The bad thing is that just as we had hit form and trying our level best to get to the top, Covid-19 struck. It really affected us because we were back in the groove. I believe when we regroup, we can re-ignite our form prior to Coronavirus.” Odhiambo said.

“As a coach, performance is a priority. When I came back, I realised they were not at their best. They had gone for a few matches without a win and the morale was low. The first thing was to bring them back to a level they can perform. When a team is playing in continental football, it’s tiresome as fatigue tends to set in at some point. So this calls for players with requisite authority to tackle and endure the situation so that they don’t burn out. The problem with Bandari was that the players had reached a point where they were completely burnt out.”

On the same note, Bandari technical director Twahir Muhiddin reiterated that their focus in the league will not only be to beat Gor Mahia, but also all the other teams.

Twahir said: “If you have players with the right attitude, everything is possible and Bandari will perform well. We always compete to beat Gor only. We forget if we beat Gor, it’s the same three points you’ll get when you beat Zoo or Chemelil. But to have both Gor and Leopards doing well motivates other young teams to up their ante. In the past season, Gor was being challenged and it wasn’t a walk in the park,” he said

He added:  “The league will be very competitive with new sponsorship from BetKing. It will be real when we restart. Exploits of Kakamega Homeboyz pushed the league to desirable heights in the season; Leopards did really well towards the end and Tusker also upped their game considerably. So thrills and spills are guaranteed if events of the season are anything to go by,” said the veteran tactician.