• Since the last competition in 2017, the biennial tournament has been expanded from 16 teams to 24.

• Seven-time winners Egypt, the competition’s most successful team, are being heavily backed to reclaim the trophy they last lifted in 2010. 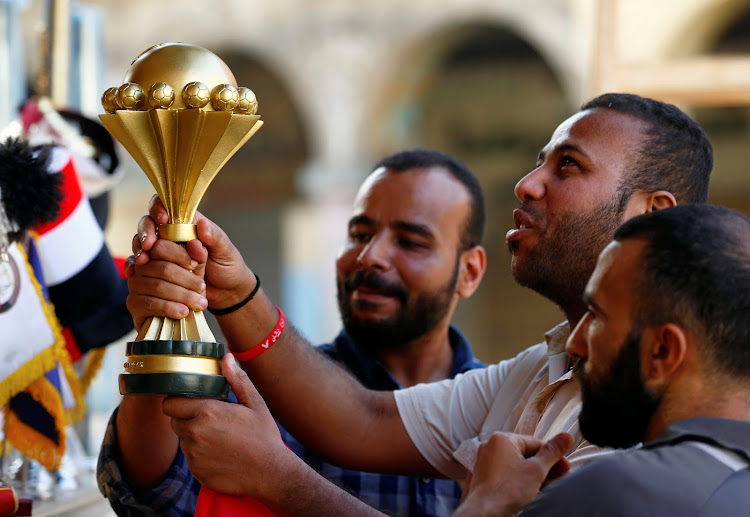 Customers hold a model of the Africa Cup of Nations' trophy at a shop in Al Ataba, Cairo
Image: /REUTERS

The 32nd Africa Cup of Nations kicks off today when hosts Egypt take on Zimbabwe in Cairo.

Six venues across four cities will be used, with three stadia in Cairo and one each in Alexandria, Suez and Ismailia. The 74,100-capacity Cairo International Stadium will host the final and the opening match. Cameroon were initially selected as hosts but were stripped of the responsibility in November by the Confederation of African Football (CAF) because “a number of compliance conditions” had not been met. The start of the tournament was also pushed back six days to allow players to rest after the Muslim holy month of Ramadan.

What is the format?

Since the last competition in 2017, the biennial tournament has been expanded from 16 teams to 24. It will follow a similar format to Euro 2016. Countries have been drawn into six groups of four and will face each group opponent once. The top two teams are guaranteed places in the knockout stages, while the four best third-place teams will also progress. The tournament will be played in Europe’s summer for the first time. It has previously been held in January and February, causing disputes with European clubs who lose players during the season.

Which Premier League stars are involved?

Who else is worth watching?

Who won’t be there?

Arsenal striker Pierre-Emerick Aubameyang, the Premier League’s joint leading scorer, will be a notable absentee as Gabon, who hosted the previous tournament, did not qualify. Former Gunners forward Emmanuel Adebayor also misses out following Togo’s failure to reach the finals. Meanwhile, Manchester United defender Eric Bailly was left out of Ivory Coast’s squad due to a knee injury.

Who are the favourites?

Seven-time winners Egypt, the competition’s most successful team, are being heavily backed to reclaim the trophy they last lifted in 2010. They have the advantage of home soil plus the talent of African player of the year Salah and will be keen to make amends for last summer’s poor World Cup display. Senegal, who have never won the tournament, are similarly being tipped for success, while much is expected of Ghana, Morocco, Nigeria and Ivory Coast. Algeria, holders Cameroon, and Tunisia are also in with a shout.

Who are the newcomers?

The expanded format has seen three nations qualify for the first time. Madagascar and Burundi have been drawn alongside each other in Group B, while Mauritania are in Group E. Burundi, the lowest ranked team in the competition at 134th in the world, are the only country of the three with an English-based player in their squad having selected Stoke striker Saido Berahino. Tanzania, who last qualified in 1980, will make just their second tournament appearance, along with Guinea-Bissau, who debuted in 2017.

Fitness will be an advantage in Egypt, says Obi Mikel

24 teams are ready to battle for glory later in the month, with the high temperatures predicted in Egypt.
Sports
3 years ago
by By PRESS ASSOCIATION
Football
21 June 2019 - 00:00