EYES ON THE TITLE

•In an exclusive interview on Wednesday, Musa admitted a significant number of Kenyan boxers still needed to refine their skills. 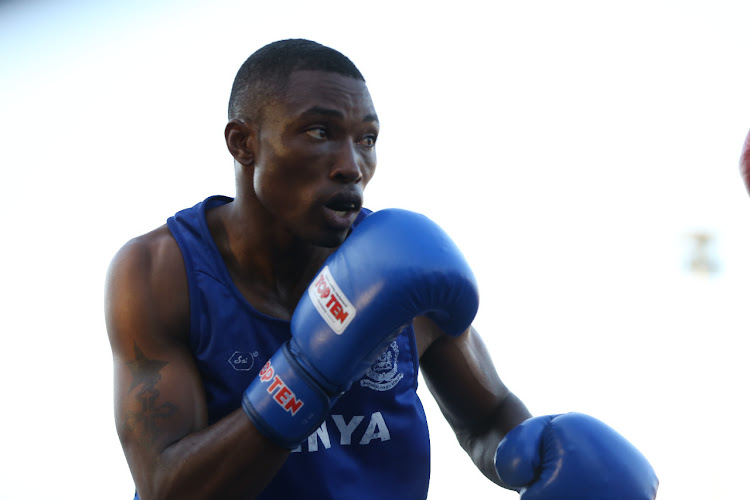 Hit Squad boxer Boniface Mugunde during a past action for Kenya Police in a local tournament.
Image: HANDOUT

Hit Squad head coach, Benjamin Musa, has said he is gratified with the exploits of his charges at the African Boxing Championship in Maputo, Mozambique thus far.

Musa spoke after four Kenyan boxers furiously punched their way into the semis of the premier annual boxing extravaganza that officially opened its doors on Sunday.

In an exclusive interview on Wednesday, Musa admitted that a significant number of Kenyan boxers still needed to strop their talons further.

“Entrenching my philosophy isn’t an overnight thing. It takes time to change a boxing culture. There’s a huge gap between those on top and those supposed to fill in,” Musa said.

“All in all it has been very positive and there’s a bright emerging talent.”

Musa decried poor officiating, saying it had denied Kenya the fifth slot in the semis slated for Thursday afternoon.

“General performance so far is okay. But poor officiating cost us a slot in the semis, where we now have four,” Musa said.

He implored the world boxing governing body to swing into prompt action in order to curb the menace.

“IBA keeps censuring referees/judges but it seems it’s still a deep-rooted disease. But IBA have representatives here who are checking on the referees and judges,” the tactician observed.

“They have done well thus far only that some of the decisions made leave a lot to be desired. We felt that David Karanja should have won his bout,” Munuhe said.

“The good thing is that half of the team is already in the medal bracket after reaching the semis,” Munuhe pointed out.

Hit Squad captain, Nick Okoth, stormed the semifinals on Tuesday following his emphatic 5-0 unanimous win over Jean Jerry Agathe of Mauritius in the quarterfinals of the men's lightweight division.

Featherweight Samuel Njau also progressed through after the referee stopped his bout against Aly Badra Doumbouya of Guinea in the second round.

Boniface Mugunde outwitted Mohamed Abdulahi of Somali in the lightweight division to secure a semifinal slot.

However, Africa Zone III Boxing champion Shaffi Bakari Hassan was bundled out in the bantamweight division after losing to George Molwantwa of Botswana on points.

Margaret Tembo of Zambia defeated Christine Ongare of Kenya on points 4:1. The team had posted mixed results on the opening day of the tournament on Monday.

Their campaign got off to a torrid start after Amina Martha lost her bantamweight preliminary bout to Egyptian Ayyad Yomna Ahmed. The referee was forced to halt proceedings to save Martha from further blows.

Boniface Mugunde, however, brushed the debacle aside to register an emphatic 5-0 win over Raul Obama Mangue of Equitorial Guinea on points.

Team captain, Nick 'Commander' Okoth cruised into the quarters without stepping into the ring after his opponent from Sudan, Wadah Mahmoud, failed to show up.

Post a comment
WATCH: The latest videos from the Star
by TONY MBALLA
Boxing
15 September 2022 - 05:00
Read The E-Paper