"My boys lacked confidence and seemed to have been a bit rattled by the name Thunder. They started off badly," noted Titans coach Job Munene. 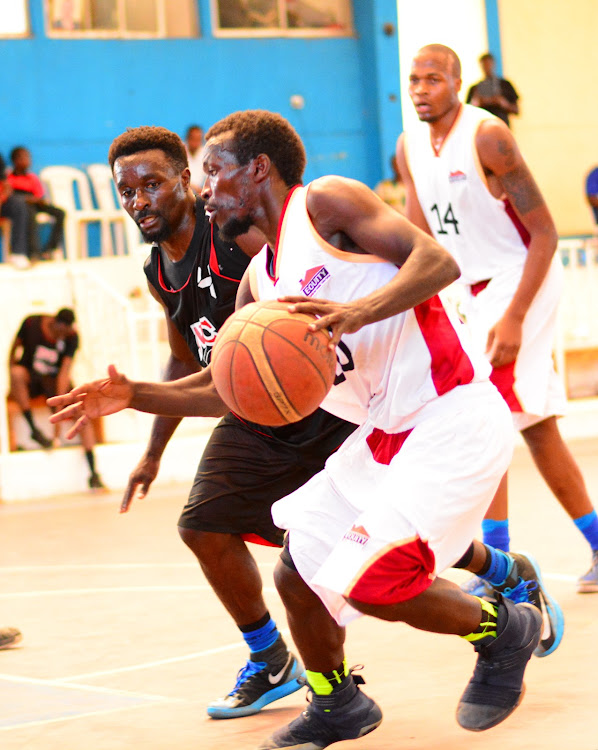 Equity's Titus Musembi (R) in contest with Griffin Ligare of Thunder in a past match
Image: FILE

Jerry Andare's three pointer got the winners off to a good start and they build a good 38-26 advantage at half time.

But after intermission, the Titans turned the tide with fury and were on top in the last stanza with a strong 31-12 blitz.

"My boys lacked confidence and seemed to have been a bit rattled by the name Thunder. They started off badly," noted Titans coach Job Munene.

"But they got their confidence in the last half and played really well pushing the ball from end-to-end. I will keep on encouraging them to make sure they play well every weekend."In the ladies' matches, Storms hit Jomo Kenyatta University of Agriculture and Technology (Jkuat) Lynx 55-40.

Liz Abayo and Lavender Miewe combined for Storm's 16 points. Jkuat, down 30-21 at half time, had 16 from Sophia Omenda.

The losers, who trailed 38-24 at the breather, had game-high of 15 points from Benny Ramazani.

KU ladies went down 56-41 to Lady Bucks as Elsa Ndong netted 13 points for the hosts while Emily Gicovi had 20 for the losers.

In the men's division, KU beat Lakeside 60-58. Dolph Otieno made 15 points as Gabriel Achola scored 14 for the losers.

Post a comment
WATCH: The latest videos from the Star
by DANN O’WERRE
Basketball
18 September 2022 - 13:34
Read The E-Paper