BANKERS ON A ROLL

Melissa Akinyi shot 19 Edna Kola 17 and Samba Mjomba 14 for the Hawks. ANU had 13 from Stella Nekesa and 11 from Mercy Mumo

•The students were down 20-11 in the third quarter and never recovered the rest of the way. 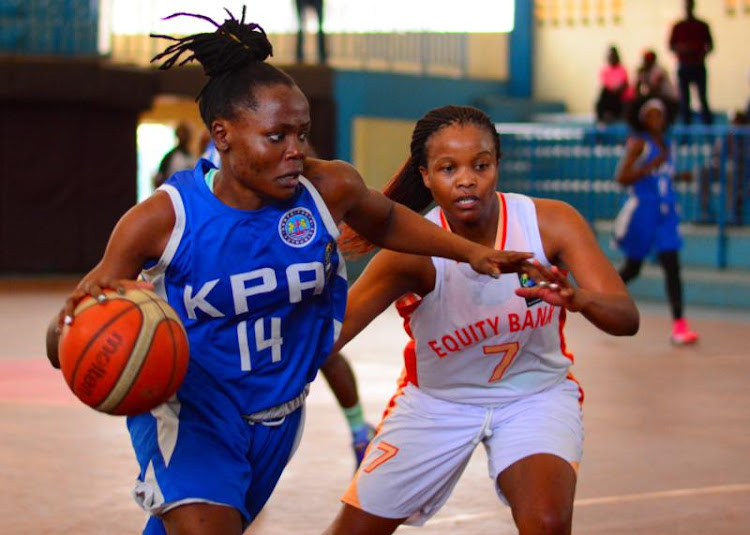 KPA's Selina Okumu (L) in action with Samba Mjomba of Equity Bank during a past league match
Image: FILE

The students were down 20-11 in the third quarter and never recovered the rest of the way.

Melissa Akinyi shot 19 Edna Kola 17 and Samba Mjomba 14 for the Hawks. ANU had 13 from Stella Nekesa and 11 from Mercy Mumo."Not bad for a first game. We tried our new players and also new plays. We believe all will work out well for us going forward." Said bankers coach Sylvia Kamau.

Storms got their groove after the break as they went on to dismiss University of Nairobi Dynamites 31-47.

Zetech University Sparks had it al too easy shooting down Eagle Wings 62-29."The results are good, but we haven't really trained well. We will improve." Said Sparks coach Maurice Obilo.

Strathmore University Blades stiffled Thunder in all quarters thrashing them 68-39."We struggled on both ends of the floor. Strathmore capitalized on our mistakes and had a great run." Said captain Griffin Ligare."We got ourselves in a hole, and we couldn't get out. For us to respond in the next game, we have to make game adjustments."In Eldoret, KPA played Eldonets in a game that had fixtures issues with the portsmen winning 86-66.

In Kisumu, reigning champions Ulinzi Warriors suffered again at the hands of Lakeside going down 73-61."It is a big win for us. The boys worked and came ready to win." Said Lakeside coach Dismas Oketch.We're staying humble but hungry as we aim at correcting our mistakes n emphasizing on everything that works for us."