Ngugi said it was at the moment that she sought to protect the girl child by developing the Nala Track Club camp which is based in Nyahururu.

• Ngugi said the camp is meant to ensure the young girls feel secure and supported. In addition to that, she said they want to develop more female coaches. She disclosed that she has never been trained by a female coach.

• Ngugi also talked highly of Briton Coach Steve Cram saying he has been of great help to her. She disclosed that she met him through Laura Weightman while in the United Kingdom as she had gone to visit her husband. 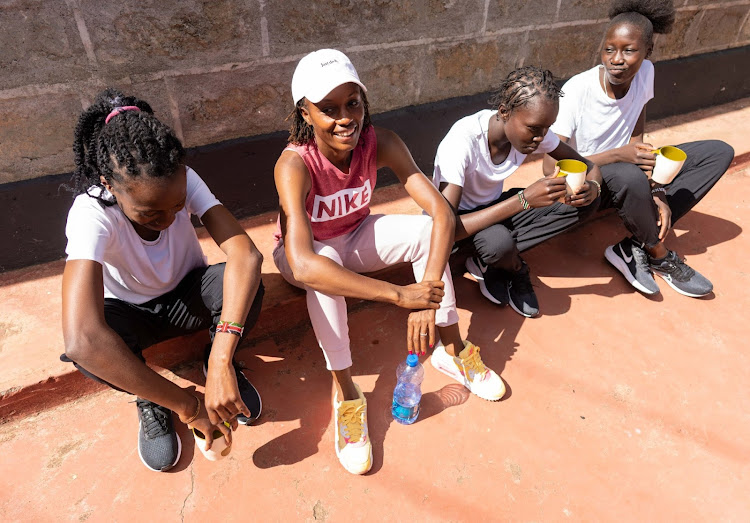 Mary Ngugi (2nd L) with some of the girls at the Nala Track Club in Nyahururu
Image: HANDOUT

2014 World Half Marathon Championships silver medallist Mary Ngugi has revealed how the death of the 2015 World Cross Country champion Agnes Tirop inspired her to start a girls-only athletics camp in Nyahururu.

Tirop died last year in a suspected domestic violence incident where her husband is the main suspect, currently facing murder charges in an Eldoret court.

Ngugi says the incident shook her to the core and she vowed to embark on a girl-empowerment programme, thus Nala Track Club in Nyahururu, accommodating only young talented girls.

She said the camp seeks to accord the girls security and support they need in life. The camp also seeks to develop female coaches, adding that she has been comfortable working with one such coach.

“We are looking to ensure the young girls feel free to do whatever they want without feeling like they are under the shadow of men. The young girls need to feel loved and supported and on top of it all, safe. Developing female coaches is also in our plans,” said Ngugi.

Meanwhile, Ngugi has expressed disappointment with her performance at Sunday's London Marathon where she placed seventh in a personal best time of 2:20:22.

“Obviously not quite what I came for today, but we learn and look forward to coming back stronger next time,” Ngugi tweeted after the London Marathon.

Elsewhere, Ngugi has hailed her British coach, Steve Cram, saying he has been of great help to her career since they were introduced to each other by British runner Laura Weightman.

“When in the UK, I used to train alone and I hated it. I requested Weightman to train with me and she agreed. That’s how I got to meet Cram. I love his training because my body was responding well. I asked him if he could continue training me even when I come back to Kenya and he agreed,” she said.

Kipruto believes he can pull off hot streak in upcoming races

He added that finishing second at the Tokyo Marathon was enough morale for him not to give up the chase.
Sports
1 month ago

Over the weekend, Macharia and his development partners launched the vocational training centre and a dental clinic at Kenswed Organisation in Ngong, ...
Sports
1 month ago
Post a comment
by ABIGAEL WAFULA
Athletics
05 October 2022 - 05:00
Read The E-Paper