Alvarez, who revealed he had been suffering with a hand injury before his win over Golovkin, will look to fight Bivol on his return next year.

•Golovkin, who stepped up to the 168lb super-middleweight division for the first time for this fight, is still the IBF, IBO and WBA (Super) champion at middleweight.

•Russian Bivol, unbeaten in 20 fights, will first defend his title against Mexico’s Gilberto Ramirez on 5 November. 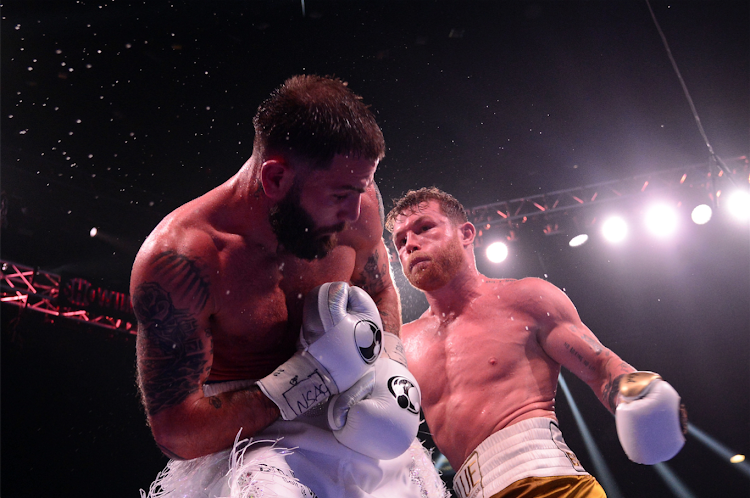 It was the third encounter in Las Vegas between the modern-day greats with Alvarez claiming a second win following a controversial draw in the first bout. After sidestepping a fightback from Golovkin in the later rounds, all three judges were in agreement, scoring it 116-112, 115-113, 115-113 for Alvarez.

“Thank you my friend, we gave the fans three great fights,” said the Mexican.

They shared a warm embrace after the fight, despite their rivalry turning sour in the four-year wait for the trilogy encounter, which saw Alvarez retain the IBF, WBA (Super), WBO and WBC titles.

Despite a bitter build-up, the final chapter did not have the same bite as the contests in 2017 and 2018. Alvarez, 32, took control from the first round, dominating an unusually passive Golovkin. Golovkin was happy to “see the rounds slip away”, as Steve Bunce on BBC Radio 5 Live commentary put it, and at the halfway point the unified middleweight champion was experiencing a shutout.

Although showing no signs of hurting Golovkin, Alvarez set the pace and was particularly successful with his left hook. Golovkin could not respond when Alvarez did land and after the eighth round the Kazakh’s trainer Johnathan Banks tried to rally his fighter, telling him “let’s go to work”.

The 40-year-old tried to do just that and staged a fightback from the ninth round onwards, his famous stiff jab finally clicking into gear, troubling Alvarez and pushing him back. Alvarez, however, while visibly tiring, was never hurt and going into the final round Golovkin was searching for what would have been the 38th

The T-Mobile Arena in Las Vegas had been an unhappy hunting ground for Golovkin, losing the rematch to Alvarez there in 2018 and being robbed of what many felt was a superb win in their first fight in 2017. And it was to be another frustrating night for Golovkin, who lost for just the second time in his illustrious 45-fight career.

Many had felt Golovkin could walk away from the sport should he lose. But he confirmed he had no intention of hanging up his gloves after Alvarez’s promise to send Golovkin into retirement with a knockout victory proved overzealous.

Golovkin, who stepped up to the 168lb super-middleweight division for the first time for this fight, is still the IBF, IBO and WBA (Super) champion at middleweight.

“Absolutely,” Golovkin said when asked he would continue fighting. “I still have this fire burning within me. I have the passion for boxing. Don’t forget I have three belts at 160lbs. I feel great. I did not allow any serious shots. I’m tired, I’m fresh. I feel the strength and power within me. Of course if opportunity presents I will be looking to return in the ring.”

Alvarez returned to winning ways after his move up to light heavyweight ended in defeat against WBA (Super) champion Dmitry Bivol last time out. It was just the second loss of his career but the Mexican confirmed his next target is to avenge that defeat.

Russian Bivol, unbeaten in 20 fights, will first defend his title against Mexico’s Gilberto Ramirez on 5 November.

Alvarez, who revealed he had been suffering with a hand injury before his win over Golovkin, will look to fight Bivol on his return next year.

“I left everything in there. I need surgery on my hand, I’m not good in my left hand,” he said. “Everybody knows [Bivol is the fight I want]. We’ll see what happens in that fight. But I need rest. It’s very important for my legacy, for my pride, for my family and my country. I will beat him.”

Fury says he will announce his next opponent next week

Fury, 34, said he was retiring from boxing after beating Dillian Whyte in April.
Sports
2 weeks ago

The new king confirmed the order at a ceremony in London proclaiming him as monarch.
News
1 week ago
Post a comment
WATCH: The latest videos from the Star
by BBC NEWS None
Athletics
19 September 2022 - 00:00
Read The E-Paper