Omanyala asked the former Head of State to continue attending his races.

•Uhuru praised Omanyala's exploits on the global stage, saying he deserved a pat on the back for making the country proud. 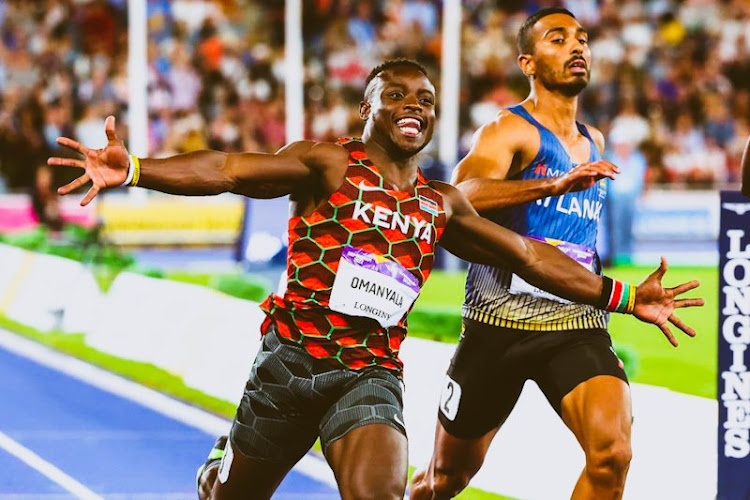 Omanyala took to social media to join the rest of the country in thanking the former Head of State for a noble service rendered to the nation.

“Happy retirement.....hope you will not stop coming to watch my races. Thank you for your service,” Omanyala tweeted.

Uhuru established himself as one of Omanyala's biggest fans in the sunset years of his 10-year tenure.

He attended the Kip Keino classic at Moi Stadium, Kasarani in April when Omanyala blazed to the finish line ahead of Olympic silver medalist Fred Kerley of the USA.

On August 4, Uhuru congratulated the Kenyan sprint sensation for winning the country's first gold at the Birmingham 2022 Commonwealth Games in the UK.

Uhuru hailed Omanyala for his exploits on the global stage, saying he deserved a pat on the back for making the country proud.

"It was super exciting to watch Ferdinand win the 100m dash in style and earn our country her first gold medal in Birmingham,” Uhuru said then.

“The win is a groundbreaking achievement not just for Ferdinand but for the whole of Kenya's athletics because he has excelled in a domain that's not traditionally ours," he added.

Omanyala stormed to the gold podium in 10.02. Akani Simbine from South Africa finished second after running in 10.13 seconds to take silver as Sri Lankan Yupun Abeykoon took bronze in 10.14 seconds.

On April 13, President Kenyatta congratulated Omanyala again following the athlete's exploits in the 100m race at the ASA Athletics Grandprix 4 in South Africa.

Omanyala won the race with this season's best time of 9.98 seconds, beating Commonwealth Games champion Akani Simbine of South Africa who finished second at the event held at the Germiston Stadium in Johannesburg.

Post a comment
WATCH: The latest videos from the Star
by TONY MBALLA
Athletics
13 September 2022 - 21:11
Read The E-Paper