Omanyala shook off his World Athletics Championships misfortunes to hurtle to the East African nation's first gold medal in the men's 100 metres final at the Birmingham 2022 Commonwealth Games.

•The eighth-fastest man of all time over the distance clocked 10.02 seconds in the bristling race to dethrone defending champion, Akani Simbine, of South Africa.

•Omanyala now hopes that his landmark win will inspire the nation and pave way for a new generation of Kenyan sprinters. 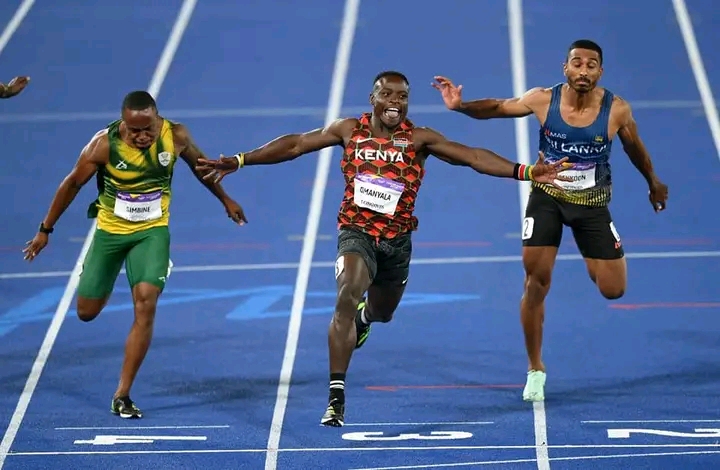 Omanyala shook off his World Athletics Championships misfortunes in Oregon to hurtle to Kenya's first gold medal in the men's 100m final at the Birmingham 2022 Commonwealth Games.

Omanyala now hopes that his landmark win will inspire the nation and pave way for a new generation of Kenyan sprinters.

“I'm looking forward to leaving a legacy in Kenya, one which will be remembered long after I'm gone. I hope I've created a path for budding sprinters in Kenya,” Omanyala told the media in a post-race interview.

The last time Kenya bagged a Commonwealth gold in 100 metres was in 1962 when Seraphino Antao clinched the 100 and 220 yards in Perth, Western Australia.

Omanyala said although he is upset that he didn't manage a sub-10, he won't allow the disappointment to dampen his spirit and ruin his party.

“I was planning to go under 10 but after all, we've got the gold. It's all about winning medals and not about the time here so I'm happy about it.”

He hailed his home fans, saying their exuberance, selfless love and unrelenting support propelled him to dizzy heights.

“The support of the Kenyans has been massive and I appreciate it. I'm happy that I've delivered this gold to them, it's a blessing.

“To the fans thank you so much. I promised the gold and I've delivered it and I'm now looking forward to an even greater future”

Omanyala pointed out that his triumph was not by chance but rather the outcome of a blueprint anchored in resilience and determination.

“It's one of the gold medals we've been planning for from the start of the year and I'm happy that we've achieved it.

“It is as a result of hard work and a good support system. The people around me have been pushing me hard and I'm glad that I'm here today.

“I'll sit down with my management to decide if I'll be proceeding with the season or cut it short.

Omanyala extolled his arch-rival Simbine, saying he had wrung out the best in him.

“Although Simbine has never beaten me, he has pushed me to the limits and I couldn’t have achieved this today without him. It’s such a blessing. He is a good rival. But I knew I had won the race when I left him at the blocks.”

He tipped his compatriot Samuel Imeta to shine, adding he had displayed great potential as a future champion.

“Imeta was brilliant yesterday. He has potential but then again, it will boil down to training and I am going to hold his hand to the very end.”

Omanyala's focus now shifts to the men’s 4x100m, where he will be crossing his fingers for another gold.