Chepkirui under pressure to defend her title in Cali

Chepkirui looks up to the two-time world and Olympic champion Faith Kipyegon and she attested to have learned a lot from her.

•  Chepkirui earned herself a direct ticket to the global show after crossing the finish line first in 4:08.08 during the national trials held at Nyayo National Stadium. 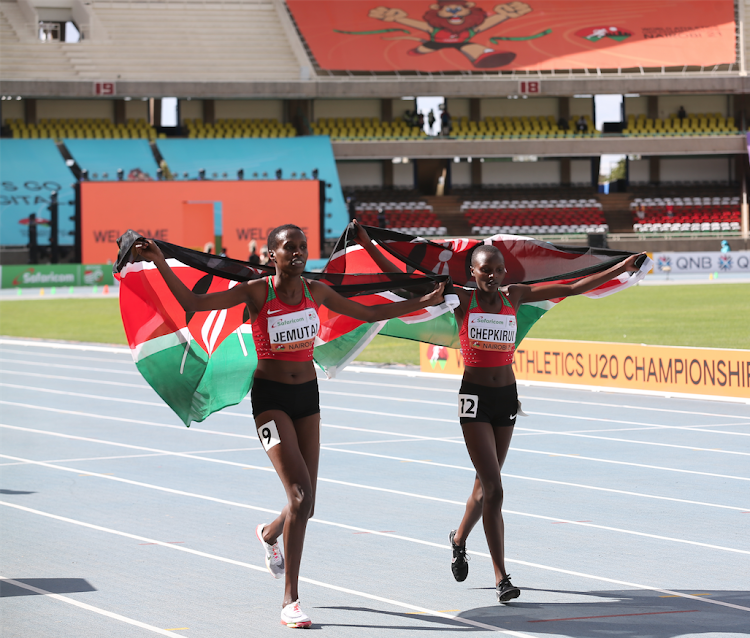 Purity Chepkirui and Winnie Jemutai celebrate after winning gold and bronze medals respectively in the 1,500m race last year during the World Under 20 Championships at Moi, Stadium, Kasarani.
Image: FILE

National champion Purity Chepkirui has admitted that she feels some pressure ahead of defending her 1500m title at the World Under-20 Championships in Cali, Colombia.

The 19-year-old said she wants to end her junior career on a high in Cali Colombia before transitioning to the senior cadre next year. She said the training has been extensive hence putting her in good shape ahead of the Cali trip.

Chepkirui earned herself a direct ticket to the global show after crossing the finish line first in 4:08.08 during the national trials held at Nyayo National Stadium.

“My training for the past three weeks has been okay and my body is in good shape compared to before. I have to defend my title and that puts me under some sort of pressure because people are watching. I also want to graduate to the seniors with a good mark,” she said.

The Africa 1,500m silver medallist noted that competing with the seniors has helped her a great deal.

She said she will not have problems transitioning because she has been running with them and she has gained a lot of experience and learned new tactics.

“Running with the seniors has been of great help to me and I intend to implement some of the tactics I have learned in the recent past. Transitioning will be easier for me because I have the experience,” she said.

Chepkirui looks up to the two-time world and Olympic champion Faith Kipyegon and she attested to have learned a lot from her.

“My role model remains Kipyegon because she is very hard working. No matter how tough the situation gets, she always pushes on. She is also a lady of sound mind and I will always respect her,” she said.

Meanwhile, Athletics Kenya (AK) president Jack Tuwei has urged junior athletes to keep off doping if they are to prolong their careers on the track.

“We have to keep reminding these young people of the doping rules because when found guilty, their actions will bring shame to our country and the federation. Engaging in drug abuse will not only affect the nation but also their health and careers,” he said.

Tuwei also encouraged the juniors who are still undertaking their education to keep their books close and keep focus because education is key.

He said he is happy that the team includes some members from the Ministry of Education. Tuwei also advised the young athletes to cheer up each other and maintain discipline during their stay at Cali.

How proverty drove Wafula into athletics

Chepngétich will have her first event on August 3 at 7:45 p.m. for the long jump qualification.
Sports
3 weeks ago
by ABIGAEL WAFULA
Athletics
29 July 2022 - 05:00
Read The E-Paper