The leading group hit the halfway stage at 1:09 .01 as the Ethiopian pair of Gebreselasse and Ababel Yeshaneh took charge with Korir boxed in between them.

•Kenyan born Lonah Salpeter who completes for Israel completed the podium position by taking bronze in 2:20:18 .

•Angela Tanui finished sixth in 2:22:15. World champion Ruth Chepengetich dropped out of the event at the 19km mark complaining of abdominal pain. 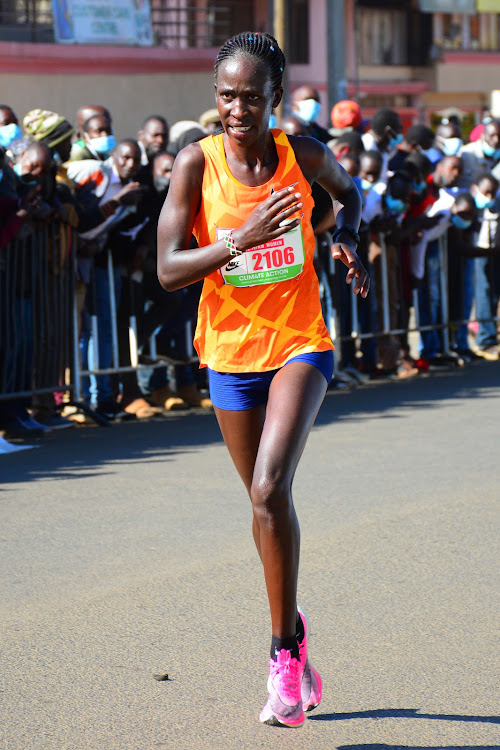 Judith Korir bagged silver in the women's marathon as Team Kenya once again played second fiddle to rivals Ethiopia at the World Athletics Championships in Oregon on Monday.

Korir, winner of this year's Paris Marathon put up a sterling show for the duration of the event before being outkicked by Ethiopia's Gotytom Gebreselase in a fascinating sprint finish to the line. Korir clocked 2:18:20 with Gebreselase taking Ethiopia's third gold of the championships by posting 2:18:11, a championship record.

Kenyan-born Lonah Salpeter, who competes for Israel, completed the podium position by taking bronze in 2:20:18.

Angela Tanui finished sixth in 2:22:15. while Ruth Chepengetich, defending champion heading to Oregon, dropped out of the event at the 18km mark, complaining of abdominal pain.

The race started on a fast pace with Chepngetich, Korir and Tanui dictating the pace alongside the Ethiopian contingent. They set a 3:16 minute for every kilometre as they broke away from the rest of the field by the 10-kilometre mark.

Salpeter was to surge to the front at the 13km mark but the chasing pack kept tabs on her and was soon dropped off by the 16 kilometre mark as the pace started taking a toll on the runners.

Tanui tried to speed up things and she took charge for the next two kilometres but soon dropped off to sixth before regaining her footing in the next kilometre to join the leading pack.

The leading group hit the halfway stage at 1:09:01 as the Ethiopian pair of Gebreselasse and Ababel Yeshaneh took charge with Korir boxed in between them.

Tanui gave chase in the next two kilometres and joined them. It was clearly evident that the winner was going to come from the leading group of four athletes as they opened up a sizeable  gap

Tanui failed to keep pace and was soon dropped alongside Yeshaneh who later failed to complete the race.

The stage was set for the final 14 kilometres of the race between Korir and Gebreselasse and the two ran side by side for the next 12 kilometres with nothing separating them before the Ethiopian unleashed a devastating kick with 800m to go to snatch gold.

Kipruto out to defend steeplechase title at Oregon22

Chepngetich set to spearhead Kenya's hunt for gold at Oregon22

Chepngetich will look to replicate her resplendent run at the 2019 World Championships in Doha where she cruised to the winner's podium after ...
Sports
4 months ago
Post a comment
by WILLIAM NJUGUNA Senior Sports Writer
Athletics
19 July 2022 - 05:00
Read The E-Paper