Nicholas Percy threw a personal best of 65.00m at the UK Athletics Championships in June

•It is the first time he has qualified for the competition outright.

•The 27-year-old, who lives on the Isle of Wight, claimed his fifth British title with a personal best 65.00m throw at the UK Athletics Championships in Manchester last month. 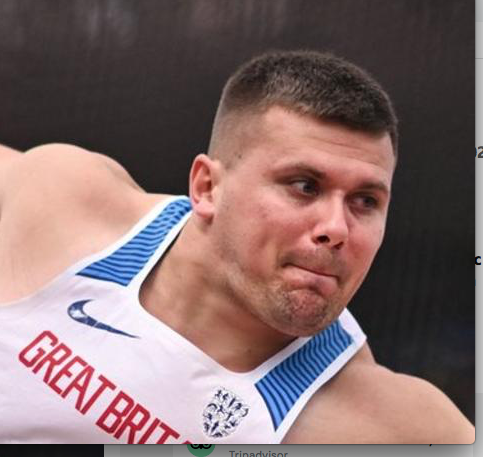 Discus thrower Nicholas Percy said he was "ecstatic" to be called up for his second World Athletics Championships for the Great Britain team.

It is the first time he has qualified for the competition outright. "It's a great honour to have achieved this. It was never the main goal this season. It was just going to be a bonus," he said.

"This is my first time breaking into the high ranks and I feel like I can be competitive with the big boys."

The 27-year-old, who lives on the Isle of Wight, claimed his fifth British title with a personal best 65.00m throw at the UK Athletics Championships in Manchester last month.

"It's amazing that British Athletics have the faith and confidence in me. I'm looking at it as a great experience," he added.

Percy's 2022 season has been notable for his progression and consistency after breaking the Scottish record and smashing his personal best multiple times.

"I'm just taking every day as it comes and enjoying it because as soon as you start putting the pressure on, to make the finals and win medals, sometimes, you can try too hard it gets worse," said Percy.

"Former world record holder, Mac Wilkins, recently said to me 'trust your unconscious mind, it knows more than your conscious mind'. It sounds poetic but it's a very true thing, the more you think about throwing far instead of letting yourself throw naturally, the performance is never there.

"You look at the best footballers in the world, when they're playing they're not thinking about certain skills on the ball, they're just heads up and they know what they're doing. When you look at someone who is trying too hard their eyes are everywhere and they're falling all over the place.

"I think the biggest thing is trusting the work that I've done and not trying to force big throws."

The World Athletics Championships represent the highest level of senior outdoor athletics competition alongside the Olympic Games. This year's event takes place in Eugene, Oregon in the United States from 15 to 24 July.

Percy, a former European junior silver medallist and five-time British champion, is used to competing in the US after four years at the University of Nebraska where he became national discus champion and three-time conference champion between 2016 and 2018.

"The conditions in the US are a big factor," he added. "Oregon is historically a very warm or a very wet state, one day it could be 29 degrees and sunny and another day it could be nine degrees and flooding. It's something we're very used to in the UK but a bit more unpredictable.

"I'm just going out there to enjoy the process. I have confidence I can throw far and hope I'm good enough to make it through."