Approximately 429 junior athletes from around the country will battle in different categories in an effort to qualify for global showpiece in Colombia. 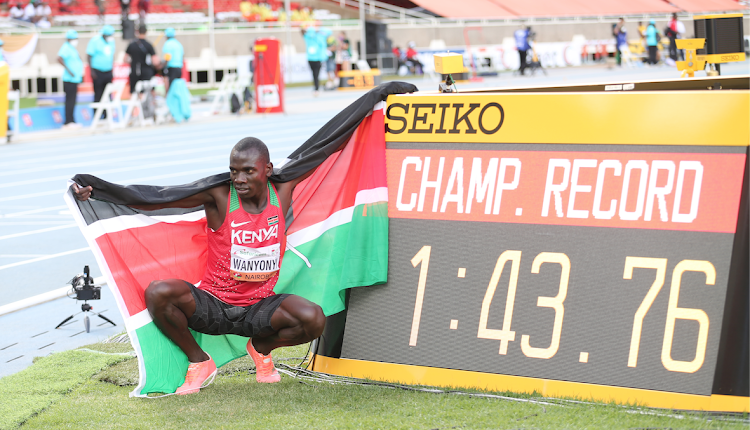 Kenya's Emanuel Wanyonyi celebrates at the board after setting a new World Under 20 Championship record in 800m
Image: FREDRICK OMONDI

Just a week after two days of scintillating athletics action at the national trials for World Championships and Commonwealth Games, attention shifts to Nyayo Stadium as the selection process for the World Under 20 Championship begins.

Approximately 429 junior athletes will battle in different categories in an effort to qualify for the global showpiece, set for Cali, Colombia between August 2 and 6.

Whereas most of the competitors will be making their debut at the national level, there are a number who have become mainstays in the international limelight and will be hoping to excel in Latin America.

Among them is World Under 20 1500m champion Purity Chepkirui, whose latest accolade is a silver medal at the Senior Africa Athletics Championships.

World Under 20 men's race walk champion Herristone Wanyonyi will be hoping to draw vital lessons from his appearance at the World Race Walking Championships in Oman in search of a second gold in the junior category.

Also expected in action is World Under 800m Emmanuel Wanyonyi and bronze medalist Noah Kibet, both of whom will be expected to shine in Colombia owing to their eye-catching performances thus far this year.

Fresh from securing his place in the team to the World Championship and Commonwealth Games, Wanyonyi will be approaching the trials in bullish form, keen to continue his hot streak.

At the Moi Stadium, Kasarani last Saturday, he spoke of the need to get up to speed in time before the trials for World Under 20.

"Today, I struggled with the problem of overstepping outside the lane and that is something I need to work on. Thankfully, I have been running with the seniors and this has helped me improve a lot," Wanyonyi said.

World Indoor 800m silver medalist Kibet seems to have tailed off of late, missing out on Team Kenya's contingent to Reduit, Mauritius before finishing seventh at last weekend's trials.

Having won the last two editions of the competition, the pressure is on Team Kenya to defend their World Under 20 title for the second time in Cali.

Athletics Kenya youth development committee chair Barnaba Korir said the federation's sole objective is to come up with a formidable team capable of replicating the feats of their peers in Tampere, Finland (2018) and Nairobi (2021).

"The collective aim is to pick a formidable side that will help us win the World Under 20 title for the third consecutive time in Cali, Colombia," Korir said.

Many of the athletes underwent month-long training in 26 camps across the country during the April holidays, in preparation for the national trials as well as the championships proper.

Only athletes who had at least two anti-doping tests in-competition and one out-of-competition  were selected into the squad for Oregon and ...
Sports
1 month ago

Ngeny credits Kinyamal ahead of Birmingham

The Global Sports Communication based athlete clocked 1:44.05 in the national trials at Moi International Stadium, Kasarani over the weekend ...
Sports
1 month ago

Kenya is almost clocking 20 years without winning a gold medal in the men`s 10,000m and Kandie aims to bring back the victory.
Sports
1 month ago
by OMONDI ONYATTA
Athletics
30 June 2022 - 05:00
Read The E-Paper