Shikuku reflects on chequered career as a racewalker

He had a short-lived career as a footballer, having played for Mumias Sugar, but has no regrets for changing careers to a sport that has won him many titles

•Though still competing in the Masters category, Shikuku is nowadays moulding upcoming racewalkers in Mombasa 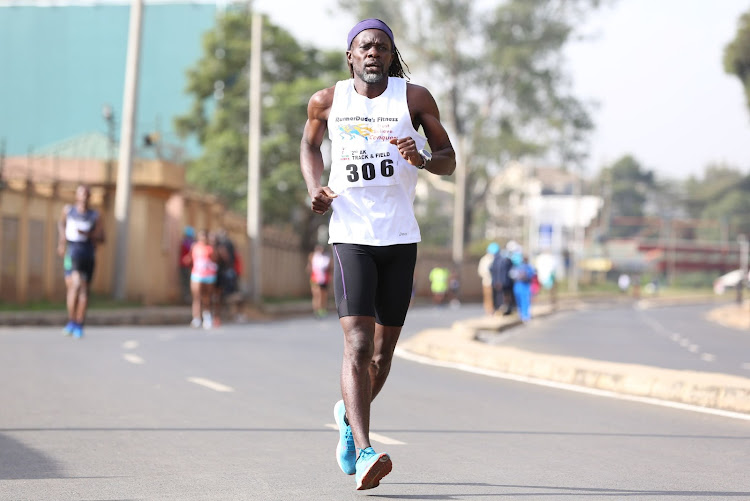 When it comes to sports  talent, Eric Shikuku possesses it in abundance. He could have been anything he wanted, including a volleyballer or footballer.

Since his primary and high school days, Shikuku was renowned as a hot prospect in the two disciplines. He was a member of the school teams at Sivilia Primary School and Mukumu Boys High School where he received his education.

Indeed, he went on to fulfill his potential in football when he turned out for the now-defunct Kenya Premier League side Mumias Sugar FC. He professes to have really loved football, which is why it is quite surprising that he later turned out as a racewalker.

"I had to leave Western to come and study at Mombasa Polytechnic. When I came here, I was clubless although there used to be a team in this region known as Coast Stars. During those days, it was hard to break into the first team of a top-tier club," Shikuku explains.

Rather than drown in a pool of tears, Shikuku turned to plan B, which was to find a sport that allow him to train individually and keep fit.

He had always known he was talented in racewalking but had not given much thought to it as a sport he could pursue to professional levels.

"Because I could not play football, I found that I had a lot of free time on my hands. That's when I decided to start racewalking because it was something I was talented in and had wanted to do for some time. It also allowed me to keep fit by training individually," Shikuku says. 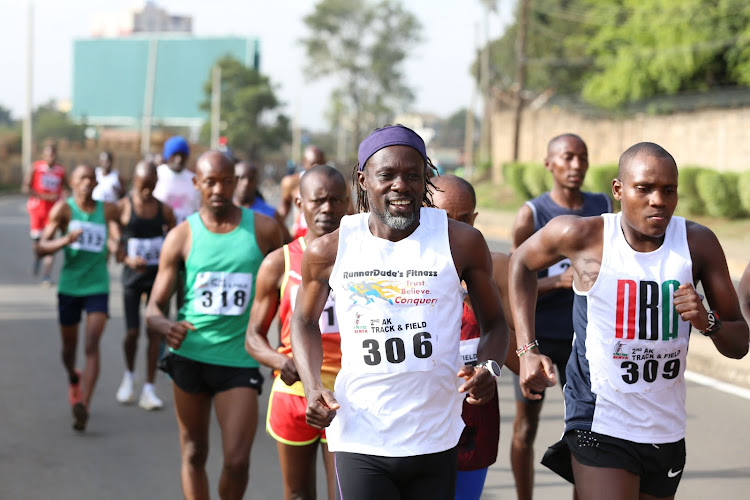 As his career began to take shape, Shikuku was not short of role models who he could look up to for inspiration and ideas to improve as an athlete.

Locally, the 1999 All-Africa Games 20km champion David Kimutai was the template for who a world-class racewalker should be.

"I admired him and looked up to him even as I progressed in my career. My dream had always been to one day compete against him and defeat him. I am happy I managed to do that right before he retired. Unfortunately, other racewalkers came up and started defeating me as well," Shikuku says amidst laughter.

"He is the one who made me fall in love fully with racewalking. I remember the first time I saw him on TV was during the 1996 Olympics in Atlanta. He won gold and that really inspired me," he says.

Having come, seen, and conquered racewalking in the country, Shikuku has also morphed into a role model for upcoming racewalkers.

Chief among these admirers is his 12-year-old daughter, Esther Maugo, who seems to have inherited her father's racewalking genes going by the accolades she is collecting at her school.

"Whenever she sees me training, she is quick to join in. Whatever type of training I am doing, she copies me. She is in Grade 6 but has already won a few championships at the school level. If she continues with the same intensity, I think she will do great things in the future," Shikuku says.

He adds: "I hope she can go on to win many more titles, including the junior championship.  You never know...she may even have a trophy-laden career than ever her dad."

In Mombasa, Shikuku is always training alongside upcoming racewalkers, passing on his wealth of experience and wisdom to guide the juniors to the top.

He is a racewalker to death as he is still actively competing, specifically in the masters' category.

Shikuku was initially part of Team Kenya at the World Racewalking Championships on March 4-5 in Oman but didn't make the trip to Muscat.

However, Shikuku bemoans the challenges racewalkers have to deal with in order to grow their craft. 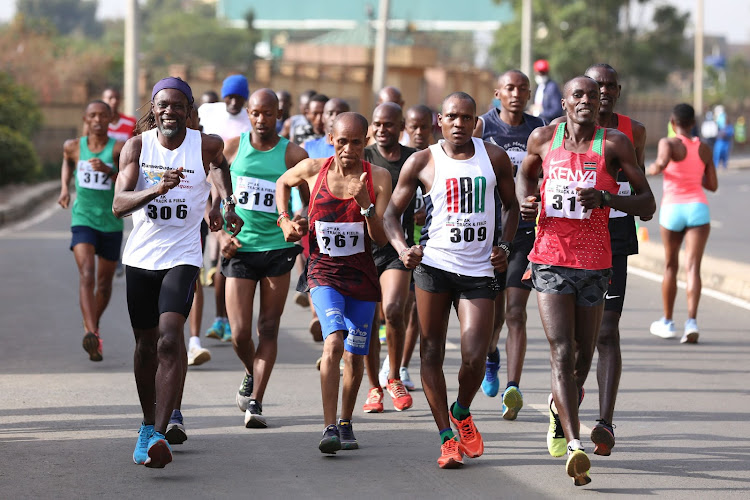 Eric Shikuku and other racewalkers in the men's 20km race during the AK track and field weekend meeting at Nyayo Stadium
Image: ERICK BARASA

The most stubborn hurdle that Kenyan racewalkers encounter is the lack of proper facilities for training.

"Although it is well-known, racewalking does not get as much support as other track and field events. Like here in Mombasa, there are a lot of talents but they do not have access to the right facilities to improve themselves," he says.

Shikuku believes this problem can be rectified through the construction of more sidewalks.

"Racewalking majorly occurs on the tarmac and where we train, there is not enough of that. You cannot train racewalkers on grass so we have had to make do with murram surfaces. However, if we could have more sidewalks in the city then that would solve the problem," he suggests.

Much as he would love to help upcoming racewalkers grow to their full potential, Shikuku's mission has also been hampered by a lack of enough time.

Most of the opportunity to mould these youngsters is during competitions because most of the other times they are in their respective schools.

However, he has made the most of these few opportunities to steer upcoming talent in the right direction as far as racewalking is concerned.

"I am always available to help them whenever needed. The few opportunities we get we usually train together and share ideas on how we can grow. Everybody is welcome because we want to create the next generation of racewalkers," he explains.

Shikuku adds: "There is also a need to train more coaches of racewalking. Especially in the schools, we need to have as many coaches as possible to tap and nurture talent in these places. Many of us could have done better if we had someone to guide and help us grow our skills. Like me, I have been self-coaching for the longest time." 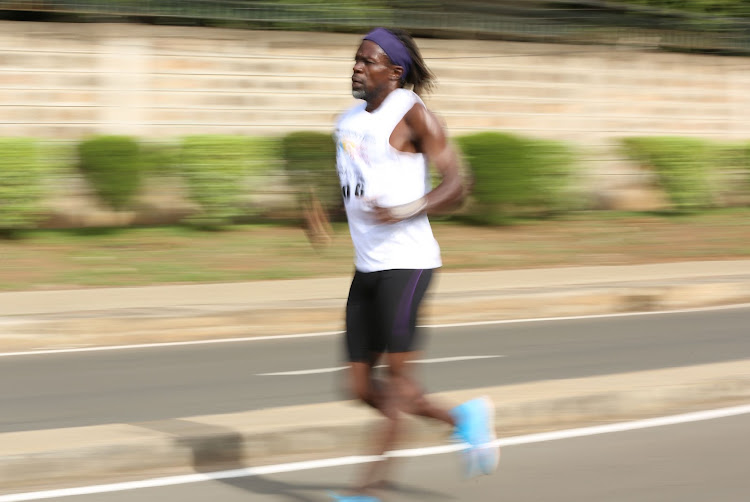 Eric Shikuku in action in the men's 20km race during the AK track and field weekend meeting at Nyayo Stadium
Image: ERICK BARASA

Despite the ailments afflicting the sport, Shikuku points to Kenya's participation in the World Racewalking Championships as a sign of better things to come.

He is impressed by the current crop of racewalkers and believes many more will emerge as efforts are made to develop the sport in the country.

"Samuel Gathimba has been very impressive and I think he will make it to the top. Lately, he has clocked below 1:19, 1:20 and I believe he can even clinch a medal at the World Championship. We also have Heristone Wanyonyi who is progressing very fast in his career," Shikuku says.

Having seen it all, he believes the two will have to work very hard if they are to make it to the pinnacle of racewalking.

"I would tell them that they will have to have a strong mentality to get to the top. They must be determined and diligent in whatever they do," he says.

Shikuku's reflection on racewalking indeed indicates a sport brimming with talent that mostly goes unfulfilled. From his perspective and experience, it is a sport that needs more technical training for coaches and the development of facilities for training.

As for Shikuku, despite the ups and downs experienced in racewalking, he does not regret ever giving up football for this sport.

It has been a steady walk to stardom and he is now working to produce the stars for the future.

Wanyonyi ready to defend U20 title before move to senior ranks

The 18-year-old was in action at the fourth and final leg of Athletics Kenya track and field weekend meeting in Mumias where he won the men's race ...
Sports
1 month ago

Oman an opportunity for Kenyan to stamp mark in race walking

The five-athlete team to World Athletics Race Walking Team Championships in Muscat,Oman will depart the country on March 2 and are optimistic of a ...
Sports
2 months ago

Ngii is the only woman athlete in the next month's World Race Walking Team Challenge,
Sports
2 months ago
by OMONDI ONYATTA
Athletics
13 May 2022 - 05:00