Chelimo elated to be home despite heartbreak at Kip Keino Classic

•A 5000m specialist, Chelimo ran in the men's 1500m to prepare for the World Championship in Oregon 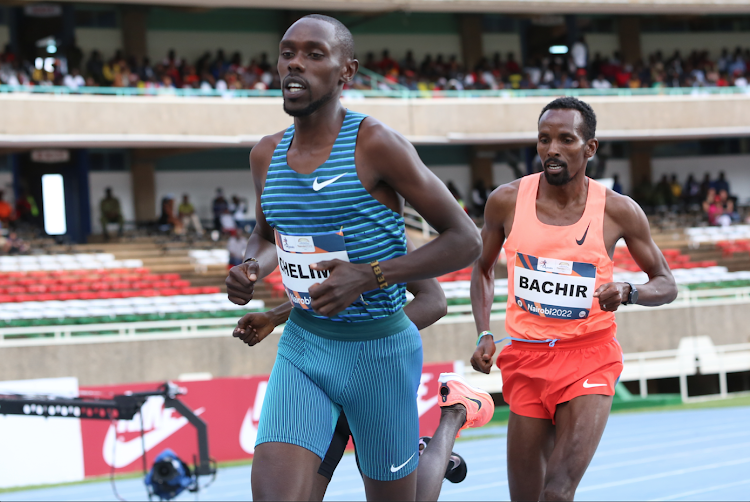 Two-time Olympic 5,000m medalist Paul Chelimo says he thoroughly enjoyed his return to the motherland during which he competed at the Kip Keino Classic.

The Kenyan-born American has been living and working in the United States for the past decade and has so far won an Olympic silver and bronze for his adopted country at the Rio and Tokyo Games respectively.

Although he finished tenth in the men's 1,500m at Kasarani Stadium on Saturday, Chelimo said he was glad to have interacted with his fellow countrymen after a long time.

"I have really enjoyed the race. I know my guys were expecting a win today...sorry to disappoint. All in all, it has been fun. I have loved the atmosphere and I am looking forward to coming again," the 2017 World 5,000m bronze medalist said.

He admitted it had been a tough race but nonetheless chose to pick the positives from what was a disappointing performance.

"It was crazy running at high altitude. It's more difficult when running in a fast race, such as this one. This is not my specialty but it serves part of my preparations for the World Championships in Oregon. The aim is to build up some speed and get strong ahead of Oregon," Chelimo said.

Meanwhile, Kipsang said his win was motivated by the disappointment of not competing in last year's edition of the World Continental Tour Gold.

" I missed this competition last year because I was not feeling well. I was so motivated today and even wanted to run under 3:30 but instead clocked 3:31 and I am grateful for that," he said.

The World Indoor 1,500m bronze medalist is gradually establishing himself as one of Kenya's best runners in the 1,500m, having won the national title at the Athletics Kenya national championships at the same stadium, a fortnight ago.

Having shone in his latest race, Kipsang believes he will add another medal to his collection this year.

"I want to compete at the World Championships as well as the Commonwealth Games. In all of these, the target is gold or at the bare minimum...a podium finish. I ask all Kenyans to continue with their support and I will reward them with a medal soon," he said.

The duo took the top two places in the men's 400m at Moi Stadium, Kasarani and now want to go and shine at the continental showpiece in Reduit
Sports
1 week ago

The World Under 20 champion timed a season best of 1:45.01 and is now pumped up for upcoming competitions after his first-ever victory in Continental ...
Sports
1 week ago
by OMONDI ONYATTA
Athletics
13 May 2022 - 05:00