The 2019 Standard Chartered Marathon champion fell down at the 5km-mark but recovered to win the inaugural race in 2:08:30 in front of a capacity crowd

•In the men's half marathon, Vincent Ng'etich took home top honours in 1:00:04 Newly-crowned Nairobi City Marathon champion Brimin Misoi says he had to be mentally strong after he fell down in the initial stages of the 42km men’s race.

"I fell down at the 5km-mark and had to pull myself back up and run a good race. After 54 minutes of the race, I developed self-belief that I could win and decided to take charge of matters," the 2019 Standard Chartered Marathon champion said.

It has been a season of disappointments so far for Misoi who admits this was playing on his mind even as he was chasing the Sh6 million prize money.

Similarly, Rop admitted that the marathon was a chance for him to redeem himself after failing to complete the Eldoret City Marathon due to a nagging injury. 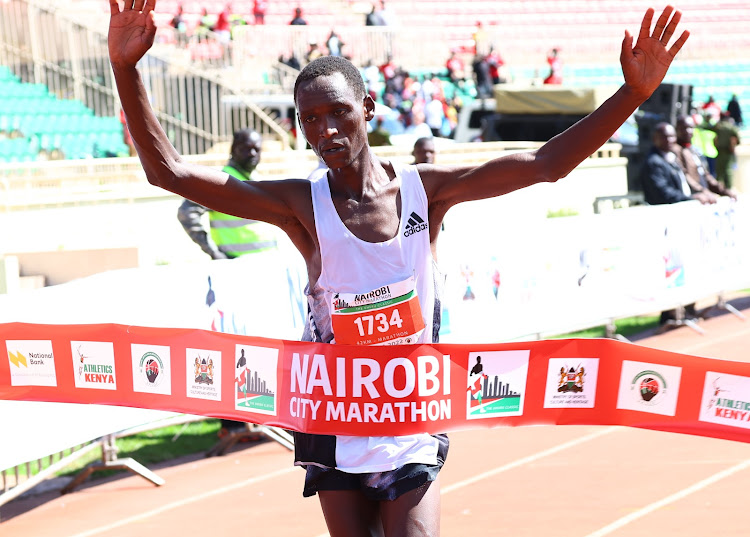 "I had to fight for myself because I was struggling with an injury during the Eldoret City Marathon. I wasn't able to finish that race but I am happy about the way things have panned out today. It is a reward for the hard work I have put in the training, including doing long runs of at least 30km per day," Rop said.

In the women's full marathon, Agnes Barsosio ran a dominant race to emerge victorious in 2:24:45  as Shyline Jepkorir (2:29:04) and Sharon Jemutai (2:29:37) came second and third respectively.

Despite the financial windfall from her win, Barsosio was quick to warn upcoming runners not to be enticed to transition to road races in the infancy of their careers.

"You see like me...I started out running in the 800m and then graduated to the 5000m. Even when I graduated to the road races, I did not move immediately to the full marathon but started with the half marathon first. So I would advise young athletes not to move quickly to road races," the 39-year-old said.

She described the Nairobi Expressway as perfect, expressing her delight at interacting with fellow Kenyans during the race.

"It was a wonderful opportunity and feeling to see them waving at us as we were running. The course was also great and allowed us to post some really fast times," Barsosio said.

The marathon, also known as Uhuru Classic, was flagged off by President Uhuru Kenyatta and First Lady Margaret Kenyatta.

The organisers have prepared a place for the fans to watch 9km of the race.
News
9 months ago

Uhuru said the expressway will be open for trial.
News
9 months ago
Post a comment
by OMONDI ONYATTA
Athletics
09 May 2022 - 00:00
Read The E-Paper