The three-time Olympic champion ran a world leading time of 10.67 and described it as a present to her Kenyan fans who have wanted her to come for a very long time 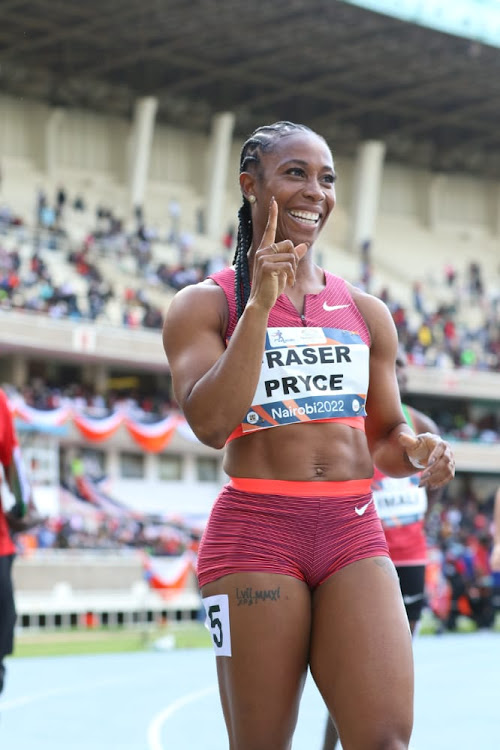 Olympic 200m Silver medalist Christine Mboma was left in tears after pulling a muscle in the women's 100m race during Kip Keino Classic at Nairobi on Saturday at the Moi Stadium, Kasarani.

Three-time Olympic champion Shelly-Ann Fraser-Pryce brought a capacity crowd at the Moi Stadium, Kasarani to its feet when she clocked a world lead of 10.67 to win the women's 100m in the Kip Keino Classic.

The Jamaican, who attracted wild cheers from fans, said the win was for the Kenyans who have for long been asking her to visit and compete in the country.

"It is good to win this race because, basically, the Kenyan fans have been asking for me to come and run here. The way they were cheering wildly for me really motivated me to run a good race," the nine-time world champion said.

Turning to her world lead in what is her first 100m race this year, Fraser-Pryce described it as a sign of things to come.

"Obviously it is a sign that there are better days ahead. It is very encouraging and I am looking forward to doing even better and running a fantastic race every time I step on the track. Obviously, I am not worried about peaking too soon before the World Championships in Oregon," she said.

The Rio Olympics  silver medalist has been out of action for a while but seemed at home when he threw a season best of 79.59 at Moi Stadium, Kasarani
Sports
2 weeks ago
by OMONDI ONYATTA
Athletics
07 May 2022 - 16:45