"I want to run one more time for my daughter," says Cheruiyot 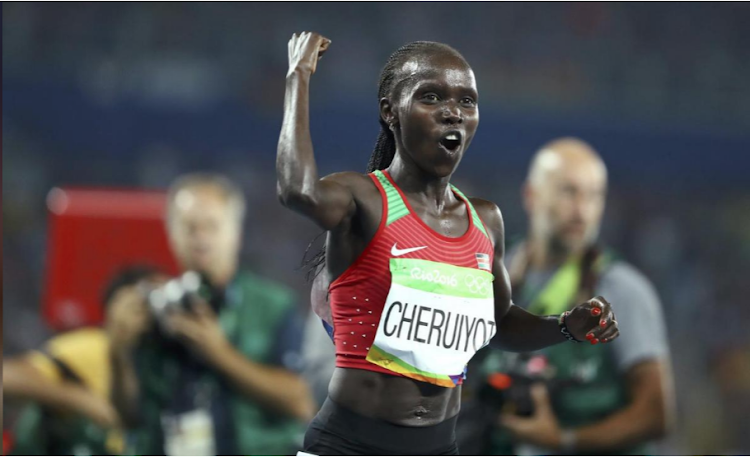 When the history of Kenyan athletics is written as far as women are concerned, Vivian Cheruiyot is undoubtedly due a chapter or two in such a book.

Her name evokes memories of a petite figure in full flight at the Olympic Stadium in Rio, Brazil, on her way to the 5000m gold medal, setting an Olympic record of 14:26.17 in the process.

It has been a while since Kenyans heard of Cheruiyot who has been missing in action since finishing fourth at the Valencia Marathon in December 2019.

The Elgeyo Marakwet-born has been savouring the fruits of motherhood, nursing her second-born five-month-old daughter Ariel Chebiwott.

Consequently, the little one has given her renewed vigour for what she loves most and now Cheruiyot's sole focus in the coming months is to return to road races for one last time.

She reckons she doesn't have much time before she will be compelled to hang her spikes but before she eventually calls it a day, she wants Ariel to see her in action.

"I am a proud mother of a boy (Allan) and a girl (Ariel). I want to come back strong so that she can see that her mommy was and is a strong athlete. I may retire from the sport in the next three or four years but before I do so, I want Ariel to see me. With the first born, we have travelled all over the world for many races," the 2011 World 5000m and 10,000m champion says. 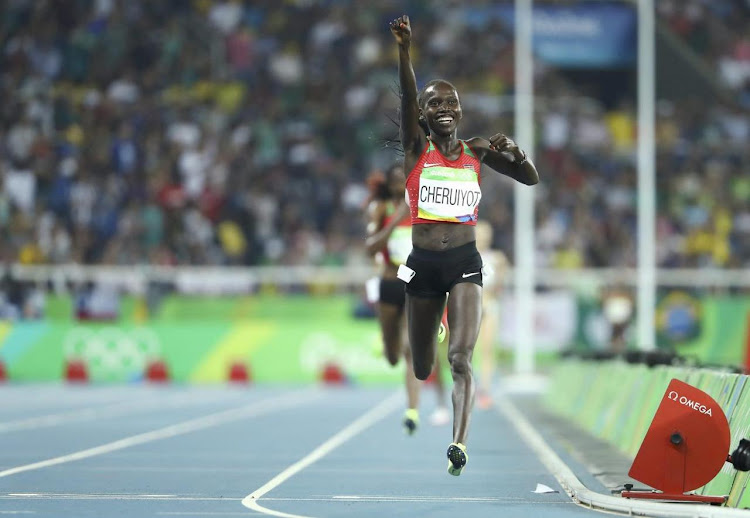 If the 2011 World Cross Country Championship senior race champion plans come to fruition, then her daughter will be fed on a lifetime of memories of her mother mingling with the who-is-who in major road races of the world.

Cheruiyot already has a wishlist of the competitions in which she would desire to participate.

"I am eyeing some of the Marathon Majors, such as Boston, Chicago, and Berlin. There is also the Paris Olympics, so by 2025, I may decide to retire. I also want to improve on my time during that period," the 2010 5000m Commonwealth champion says.

Cheruiyot knows it won't be a walk in the park considering the long time she has been out of action as well as the fact that new talents in road races keep emerging day by day.

However, she is confident in her abilities, noting that her love for the sport runs deep.

"It will be between 2-3months before, I suppose, I will be able to resume training. I need to work on my weight first because it has been a while. I hope my body responds well," she says.

Being a police officer, she epitomises the bravery associated with the profession regardless of the barriers ahead.

"For the time I have been away, the likes of Peres (Jepchirchir) have done really well in the marathons. For me, I am passionate about athletics and it is one thing I would still do if I were given a chance to start over. I am not afraid of what tomorrow holds or of any competition I will face when I come back," she says. 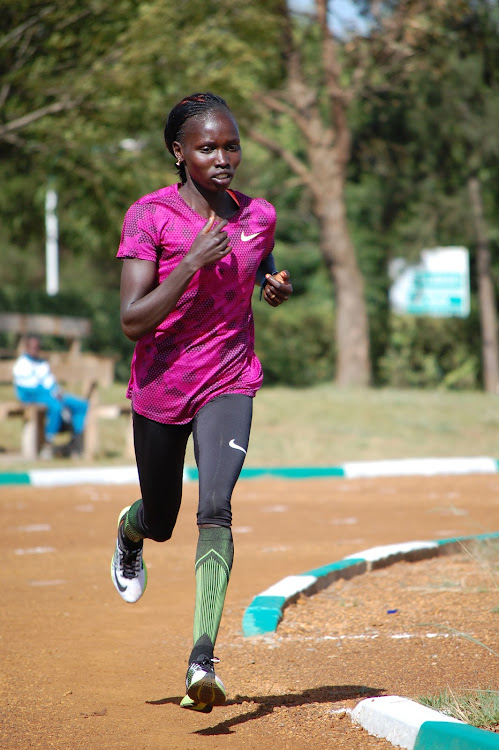 Vivian Cheruiyot during a past training at Moi University School of Law grounds.
Image: FILE

Cheruiyot adds: "The most important thing is to focus on yourself rather than spend a lot of time maintaining tabs on the competition. One of the most ingredients for success is prayer because it helps you to drive away fear. So in everything,  you do leave it to God."

Looking back to her journey, the 2001 Africa Junior 5000m champion believes form is temporary but class is permanent.

The 'pocket rocket' first dipped her feet into athletics waters in 1998 as a 14-year-old from Rogocho village in Elgeyo Marakwet.

Eighteen years later, and having filled her trophy cabinet with medals from track and field, Cheruiyot shifted focus to the road races.

"I would say I have survived in this industry because of my talent and the favour of God. It is also through hard work and discipline. When I won in Rio, I felt I had achieved enough in track races and that it was time to try the road race. It is a decision I do not regret even for an instance," she says.

Her win in the Brazilian capital remains etched in her memory to date considering her heart had ached for so long for an Olympic medal.

"Daegu (2011) was quite unforgettable considering I won two gold. However, Rio Olympics tops it for me because it was the only medal that was missing from my collection," she says. 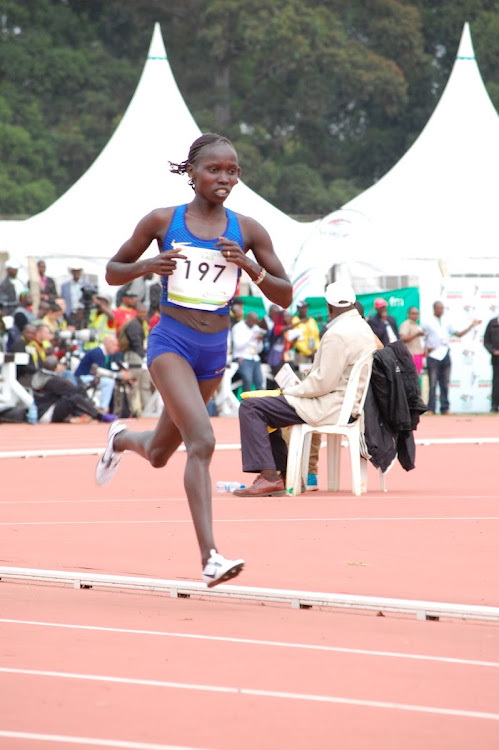 Vivian Cheruiyot in a past track competition
Image: FILE

Ahead of her return to the road, Cheruiyot says her focus is on family and business.

"I am proud of being an Olympic, World Champion, or Commonwealth champion. I am also proud of being a mother to Allan and Ariel as well as a wife. When I am not in competition, I run a business with my husband because we want to secure the future of our children," she says.

Her radiant face is indicative of someone who is enjoying motherhood and experiencing what Generation Z would categorise as the 'soft life.'

"When it comes to eating, I love most foods...I do not discriminate. However, during training, you have to be careful and so once I am back in action, the diet will definitely have to change," Cheruiyot says.

In the spirit of 'Utumishi kwa Wote', her attention is also centred on her 9-to-5 job of providing service to all as far as security is concerned.

"I am a police officer with the right to arrest you if you commit a crime. I won't hesitate to apprehend you even here and now," Cheruiyot jokingly says. 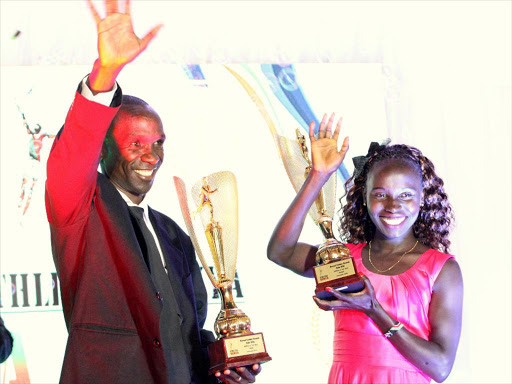 Male Athlete of the Year Eliud Kipchoge with his female counterpart Vivian Cheruiyot during the AK 2016 Golden Gala Awards in Nairobi on Wednesday . /ENOS TECHE

She is still a household name in Eldoret and usually attracts doting fans when she walks along the streets in town.

"In Nairobi, it is easy to walk around without anybody recognising you unlike Eldoret, which is the home of many athletes. When abroad, you are only recognisable to those who follow athletics keenly otherwise in places like London not many people will recognise me," the 2010 World Indoor 3000m silver medalist says.

Vivian's return to action will be the stuff of fairytale not only for her daughter but for all athletics purists.

If the accolades in her 23-year career are anything to go by, then the athletics world should be ready to write one of the most momentous resurrections in the sport.

In the meantime, enjoy the blessings of motherhood. 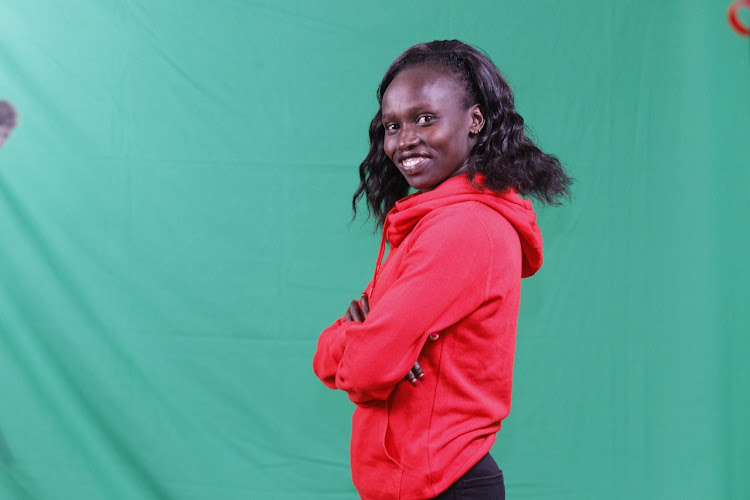 These athletics stars headline the police department in rank and file.
Sports
2 years ago

But before Tokyo, Cheruiyot is keen on defending her title at the Lisbon Half  (March 21) and reclaiming her London Marathon title on April 26.
Sports
2 years ago
Post a comment
by OMONDI ONYATTA
Athletics
25 March 2022 - 00:00
Read The E-Paper