Omanyala was feted during the Sports Personality of the Year Awards (Soya) held at the Bukhungu Stadium, Kakamega on Tuesday evening. 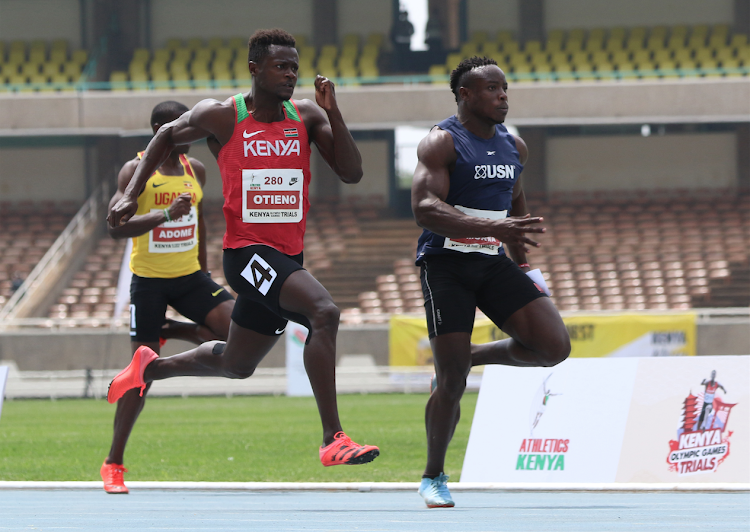 Africa's fastest man in men's 100m race, Ferdinand Omanyala, has been crowned the 2021 Sportsman of the Year.

Omanyala was feted during the Sports Personality of the Year Awards (Soya) held at the Bukhungu Stadium, Kakamega on Tuesday evening.

The sprint sensation stole the limelight from legendary marathoner Eliud Kipchoge and 800m Olympic gold medalist Emmanuel Korir on his way to the winner's podium.

Omanyala rose to prominence after smashing the African 100m record and capping off his meteoric rise with a scintillating performance at the 2020 Tokyo Olympics where he hurtled his way into the semis.

Despite finishing second at the Diamond League in Italy behind Sifan Hassan on June 10, her time of 3:53.9 was enough to erase her previous record of 3:54.22 set when winning the world title in Doha in 2019.

A month later, she improved the record by two seconds when she won in Monaco in 3:51.07, beating Hassan to second place on July 9.

Chepng'etich, 27, would stage a successful 1,500m title defence at the Tokyo Summer Games on August 6, winning in an Olympic Record time of 3:53.11 to beat Laura Muir and Hassan, who got silver and bronze respectively.

Chepng'etich then claimed her second 1,500m Diamond League Trophy clocking 3:58.33 to win in Zurich on September 9, before wrapping up her season with a successful defence of her 1,500m title at the Kip Keino.

Shujaa won Safari 7s for the first time since 2016 after defeating Germany 12-5.

They bagged silver at Vancouver 7s after losing to South Africa 38-5 in the Cup final.

Shujaa then settled for bronze at Edmonton 7s after beating hosts Canada 33-14 to finish the series third overall behind South Africa and Great Britain.

They finished 9th at the 2020 Tokyo Olympics after beating Ireland 22-0 in the playoffs.

Okere, a former Tusker FC Assistant Coach, guided Vihiga Queens at the inaugural Caf Women’s Champions League where they only won one match, beating Moroccan side AS FAR 2-0 while losing 1-0 to Mamelodi Sundowns of South Africa and 4-0 to Rivers Angeles in the group stages.

Okere, who linked up with Vihiga Queens in August, handed the team their first major trophy, firing them to the 2021 Cecafa Women’s title which served as the Caf Women Champions League qualifiers.

They beat Ethiopia’s CBE FC 2-1 in the final played at Moi Stadium, Kasarani in September.

He was appointed Harambee Starlets head coach in April and guided the team to an emphatic 15-1 win over South Sudan.

The Legacy Makers have had a season to remember after they were crowned the Cecafa champions in Nairobi after reigning supreme against the top team in the region.

The fete saw them qualify for the first time for the Caf Women Champions League.

The Most Promising Boy award went to Heristone Wanyonyi, who stole the headlines as the first Kenyan to win the World Under-20 Walk race.

The Most Promising Girl award was won by Teresia Muthoni, the 3,000m champion from the World U20 Championship.