•Kenya open their campaign against Canada at 1:22 pm . The two sides clashed in Dubai in the second leg with Kenya running out comfortable winners winning 26-14. 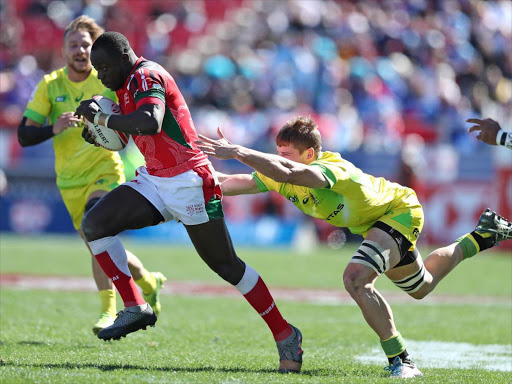 Shujaa will be aiming to improve on their eighth-place finish when the Malaga Sevens goes down in Spain this weekend.

Kenya open their campaign against Canada at 1:22 pm. The two sides clashed in Dubai in the second leg with Kenya running out comfortable 26-14 winners.

Simiyu has, however, urged his side to be cautious of a young and tenacious Canadian side, who have nothing to lose.

"They are a fearless side and pushed us quite close during the Dubai,” noted Simiyu.

Kenya will then face Wales at 6:06 pm who are returning to the circuit after a one-year absence due to Covid-19 restrictions.

The former skipper expects a tough contest against the Welsh.

"They will want to prove a point and we must be ready for the challenge they are going to pose,” sad Simiyu.

Shujaa will then face France in a mouthwatering clash on Saturday at 1:49.pm

The French have been one of the resurgent teams on the circuit with their flair and will pose a serious threat to Simiyu's charges in what will be an entertaining clash.

The two sides have clashed forty times in the World series with the French holding the edge with 22 wins. They have won the last eight out of 10 meetings between the two teams.

They last met at the Paris Sevens three years ago with France winning 26-21.

The quarters, semi and finals are slated for Saturday. World champions New Zealand and Olympic champions Fiji withdrew from the tournament due to Covid -19 restrictions and have been replaced by Germany and Jamaica respectively.

The team arrived on Monday and have had light training since arrival and Simiyu is relishing the challenge.

“We have had a good week in Malaga and we hope to go and enjoy ourselves on the pitch," said Simiyu.

Skipper Nelson Oyoo said they are upbeat about their chances this weekend.