Kipsang hopes to strike gold in 2022 after impressive Tokyo bow

The 25-year old has been building up his physical fitness and was among competitors in the the past weekend's Athletics Kenya Cross Country Meeting in Kapsokwony.

•He is hopeful of striking gold at next year's Commonwealth and World Championship in Oregon, USA

•However, he, along with other Mount Elgon athletes, bemoan lack of proper training facilities in the region 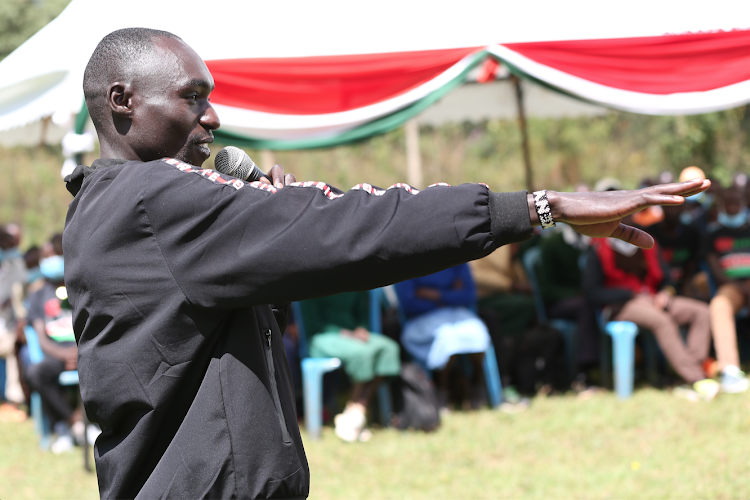 Kenyan 1,500m runner Abel Kipsang has set his sights on gold at next year's major competitions after finishing fourth in the men's 1,500m final at this year's Tokyo Olympics.

Kipsang said his debut at the summer games has provided him with a solid foundation from which to pursue a first-place finish at the Commonwealth Games in Birmingham, England as well as the World Championship in Oregon, USA.

"I went to Tokyo and finished fourth although I had wanted a better result. However, I am now pumped up for the next year and will be going for gold next year in what is a busy calendar," Kipsang said.

August was a month to remember for the Mount Elgon native after he timed 3:31.65 in the semi-finals of the men's 1500m to briefly hold the Olympic record.

It was, however, shattered by Norwegian Jakob Ingebrigsten (3:28.32) on his way to Olympic gold as Kipsang finished fourth in a personal best of 3:29.56.

Since then, the 25-year old has been building upon his physical fitness and was among competitors in the men's 10km during the past weekend's Athletics Kenya Cross Country Meeting in Kapsokwony.

"What is now remaining for me to improve on is my speedwork. This weekend I tried out in the 10km and finished sixth, an indication that physically I am moving in the right direction. Usually, I would compete in the 2km cross country relay," he said.

However, the KBC Nacht van de Atletiek 1500m champion lamented over lack of proper training facilities in the Mount Elgon region, especially with regards to speedwork.

"Many times we have been forced to go all the way to Iten and Kapcherop to access these training facilities. Undertaking speedwork has become a challenge because there is no suitable field. I hope that the High Altitude Training Camp will be completed soon," Kipsang said.

His comments were echoed by the 2019 Africa Under 18 800m silver medalist Sheila Chepkosgei who recounted her struggles while preparing for trials for August's World Under 20 Championships.

"It was a struggle getting transport to travel to the various venues for the preparations and trials. In most cases, we are compelled to travel to Kitale or Kanduyi for speedwork," the Moi Girls Kaptama student said.

Chepkosgei, who plans to graduate to 1500m, hopes to compete at next year's World Championship in Oregon.

"If we are provided with the right resources then this region can produce more and better athletes. Personally, I am done with the junior ranks and are training with my sights on Oregon next year. I want to fight for my place in the team," she said.

The two were speaking on Monday morning on the sidelines of AK's consultative forum with athletics stakeholders in the Mount Elgon region.

This is the fourth week of the federation's sit-down with coaches, athletes, and managers to identify and resolve pertinent issues affecting the sport.