The requiem mass was also an opportunity to fire warning shots to unscrupulous coaches and agents who have been preying on athletes and sucking them of their riches.

•Tears flowed freely as athletes, officials as well as family and friends recounted their best memories of the 25-year old Agnes Tirop.

•From the morgue, the cortege snaked its way along the Eldoret-Kapsabet Road to Kapnyamisa Primary School in Nandi County for a requiem mass.

•2016 Rio Olympics javelin silver medalist Julius Yego had mourners smiling when he envisioned Tirop looking down upon them with joy in her heart. 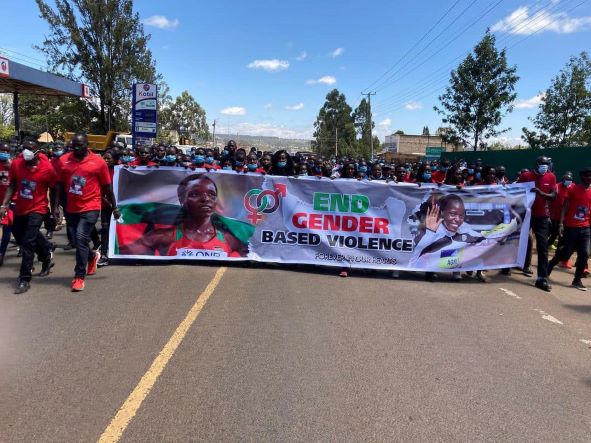 Athletes led by Julius Yego during their peaceful procession within Eldoret town, with the message "End Gender Based Violence" following the brutal murder of Olympian Agnes Tirop
Image: EMMANUEL SABUNI

Eldoret town, and the rest of the country, was once more reminded of the painful reality of the demise of world 10,000m bronze medalist Agnes Tirop, who was found dead over a week ago in her Iten home.

Members of the public lined up the streets of Kenya's athletics hotbed as Tirop's journey to her final destination began at the Eldoret Hospital mortuary where she has been lying ever since the murder, in which her husband Ibrahim 'Manuu' Rotich is the main suspect.

In solidarity with her on this ultimate journey were her peers on the track and field who had watched her blossom from a teen sensation into a long-distance runner to watch in the coming years.

Tears flowed freely as athletes, officials, as well as family and friends, recounted their best memories of the 25-year old.

"It is so painful to lose such a talented athlete . She is somebody I have interacted with throughout my career and competed alongside her at the World Cross Country Championships in March 2013 in Poland. Agnes has been a friend and someone we have grown with in athletics," Olympic 1500m champion Faith Kipyegon said.

The athletes also held a peaceful procession in protest against Gender Based Violence against athletes.

Their voices against this vice could not be any louder, beginning from a banner emblazoned with Tirop's image and the message, “End Gender Violence”, to their statements at the requiem mass, to nail the point home.

Across their t-shirts were images of Tirop's wide smile after clinching bronze in the women's 10,000m at the World Championships in Doha, Qatar in 2019.

From the morgue, the cortege snaked its way along the Eldoret-Kapsabet Road to Kapnyamisa Primary School in Nandi County for a requiem mass as onlookers waved goodbye to their fallen heroine. 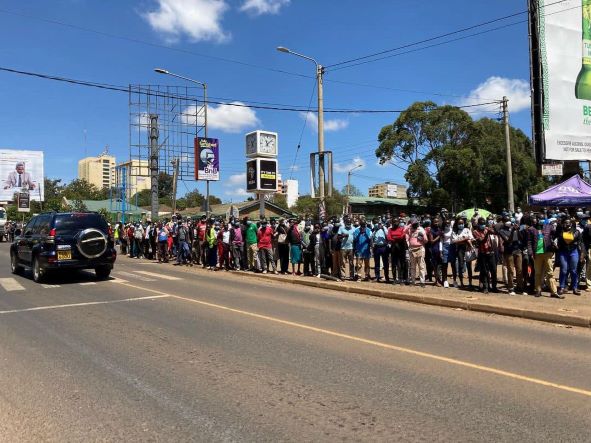 Kenyans line-up on the streets of Eldoret to watch as athletes accompanying the body of the slain Olympian Agnes Tirop
Image: EMMANUEL SABUNI

At Kapnyamisa Primary School, hundreds of other athletes had joined other mourners to pay their last respects to Tirop.

One by one, they lined up to introduce themselves and speak glowingly of a shining star who had only last month timed 30:01 to set a new women-only record in 10km at the Adizero Road to Records event in Germany.

As they stood in front of the white casket bearing their colleague's remains, their faces highlighted the heartbreak within.

The 2016 Rio Olympics javelin silver medalist Julius Yego captured the extent of the loss the country has suffered through the demise of a lady who was the second youngest athlete in the world to clinch a global cross country title courtesy of her win at the 2015 World Cross Country Championship in Guiyang, China.

"I was really disturbed when I heard of Agnes' death. Our athletes are the prime ambassadors of the country and we need to do more to ensure that such promising talents are not cut short," Yego said.

Regardless of the circumstances of her death, it was still heartwarming to hear many remember her fondly for her picturesque smile that could thaw the coldest of hearts.

"She was ever-smiling and hard working. I remember talking to her lastly on Monday and still keep looking at my call log," Chemos said.

Likewise, David Letting, Athletics Kenya marathon coach, recalled his journey with Tirop throughout her career and the discipline that underlined her life.

"I have known her for a long time and worked with her in various competitions, including the Africa Cross Country Championships in Kampala, Uganda and the 2015 World Cross Country in China. On top of being talented, she was a very disciplined athlete ready to listen and follow instructions," Letting said.

Yego had mourners smiling when he envisioned that Tirop would be probably looking down upon them with joy in her heart.

"If she rose from the dead right now, she would be happy to see how you have all gathered here to celebrate her. Let us learn to love one another and live together in harmony," he said.

The requiem mass was also an opportunity to fire warning shots to unscrupulous coaches and agents who have been preying on athletes and sucking them of their hard-earned riches.

Speakers were unanimous that the days of frauds masquerading as husbands and coaches are numbered and that Tirop should be the last athlete to fall victim to such people.

Julius Kirwa, Athletics Kenya head coach, said the federation has launched a vicious campaign against tacticians who have not undergone the required courses and received certificates allowing them to operate.

"This practice must end. Coaches not accredited by AK will face the music. We ask athletes to help us in this campaign and help us expose such individuals since it is you who is at the grassroots and know these people," Kirwa said.

"We need to be empowered by furthering our education to avoid falling prey to people who pretend to love you but are only after money. You also need to speak up about your tribulations rather than keeping quiet so you can be assisted," she said.

Tirop's final journey will culminate in a burial service at her parents' home in Nandi County on Saturday.