The Mogonga Secondary School alumnus has now turned her focus to the World Athletics Continental Tour at Moi Stadium, Kasarani on September 18.

•At the Olympics, she went furthest of all Kenyan representatives in 800m, bowing out in the semifinals after finishing third in Heat 1 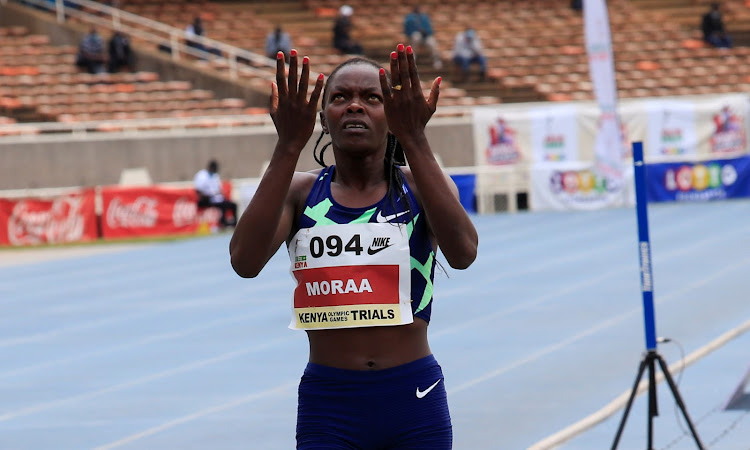 Mary Moraa celebrates after winning the 800m race during the national trials for the Tokyo Olympics.
Image: FILE

Despite finishing a disappointing eighth at the Brussels Diamond League last weekend, world under-18 400m silver medalist Mary Moraa believes the experience will transform her into a better athlete in the future.

Moraa clocked 1:59.79 on her Diamond League bow in the women's 800m, a race won by Jamaican Natoya Goule in 1:58.09. She admits she is yet to gain enough experience in the two-lap race after transitioning from the 400m.

“It was a good experience competing in Diamond Leagues and because I have not gained much experience in the series, I have hopes of doing well in future,” she said.

She says she will be banking on her experience in the European circuit so far to clinch victory on home soil.

"That (Brussels Diamond League) was not my best race.  It was like an experiment to test my endurance to shine better. I want to try my best at the Kip Keino Classic back home,” she said.

At the Kamila Skolimowska Memorial World Athletics Continental Tour in Silesia, Poland, she competed in 1,000m, where she finished 10th in 2:39.47 — a race won by Great Britain’s Jemma Reekie in 2:35.47.

“In Silesia, I was looking for endurance to compete well in 800m and that is why I had to run 1,000m. Next, I will be competing in my homeland and I have to try my best,” she added.

At the Olympics, she went furthest of all Kenyan representatives in 800m, bowing out in the semifinals after finishing third in Heat 1.