No fans allowed at World Under-20 Championships at Kasarani

Sports Cabinet Secretary Amina Mohamed say they have been compelled to take this drastic measure considering Kenya is yet to vaccinate over 50 per cent of the population.

• We are more than ready for the World Under-20 Athletics Championships-Amina.

• The handover of the track to the institution will wait until marking and cleaning of the track have been done. 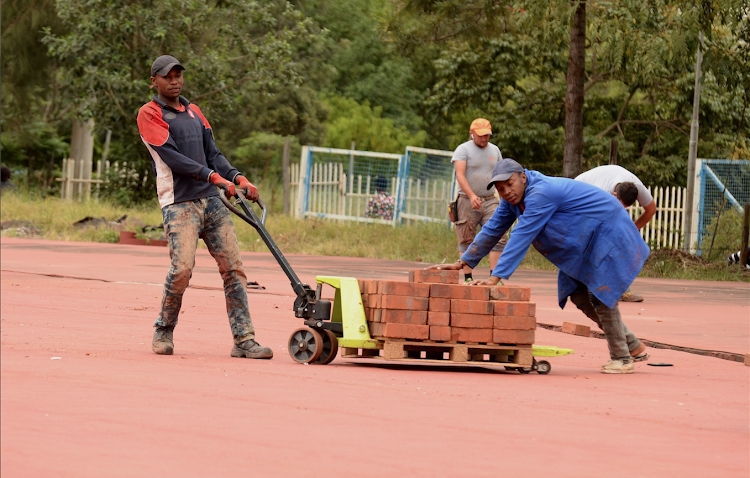 Ongoing fitting of the Tartan track yesterday at Kenyatta University ahead of the inspection by the Sports Cabinet Secretary Amina Mohamed
Image: /HANDOUT

The World Under-20 Championship, slated for August 17-22 at Moi Stadium, Kasarani,  will be held without fans.

Making the announcement, Sports Cabinet Secretary Amina Mohamed said they have been compelled to take this drastic measure considering Kenya is yet to vaccinate over 50 per cent of the population.

"It is regrettable that we are delivering the Championships in a very limited format. We have to factor in the fact that we are facing another possible wave of coronavirus infections and so such decisions must be made. There will be no spectators unless the situation changes dramatically for the better," Amina said.

She said the decision can only be reversed if the infection rate in the country drastically reduces albeit any plans to admit fans into the stadium would still need greenlight from World Athletics.

Instead, huge screens will be set up in various parts of the country so that fans can follow the proceedings from whatever location.

Regardless, a fanless World Under-20 Championship means the event could be devoid of the pomp and colour that characterised the 2017 World Under-18 Championships at the same venue, which attracted capacity crowds.

The CS assured that the country is ready to welcome the 128 countries who have so far confirmed participation in the global track and field event.

"We are more than ready. This event will give us an advantage because it has opened more opportunities for us to host major events in the future," she said.

At the same time, the local organising committee chair Jack Tuwei confirmed that plans to put Kenya's junior athletes into a bubble camp have been finalised.

"As you know, bubble camps are now a requirement for major events. With the teams leaving for Tokyo Games, we saw it fit that the juniors take over so that we can prepare them properly for the Junior Championships," Tuwei, also Athletics Kenya president, said.

The two were speaking on Thursday during an inspection of the ongoing laying of a new synthetic track at the Kenyatta University by Spanish-based Mondo Track and Field.

Amina expressed satisfaction with the works, describing the track as a game-changer for sports activities in the country.

"The synthetic track was designated as a warm-up area for athletes competing at the junior event, which will be held at Kasarani. We shall leave this institution with three big projects completed; the bridge, borehole, and the synthetic track all done to great standards. With changes having been made and the village moved, this should be viewed as President Kenyatta's legacy project," the CS said.

She also assured the track will be upgraded in readiness to host next year's Africa University Games.

"Discussions are underway so see that the two lanes are added so that it can meet the threshold."