•Kinyamal will be up against American d trio of Clayton Murphy, Bryce Hoppel and Isaiah Harris  alongside Daniel Rowden of Great Britain and Jeffrey Riseley of Australia 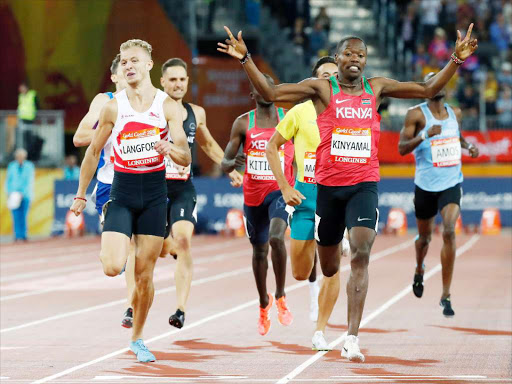 This being the final Diamond League before the Tokyo Olympics,  Kinyamal will be hoping to lay a marker ahead of the extravaganza in the Far East later this month.

Kinyamal will be up against the American  trio of Clayton Murphy, Bryce Hoppel and Isaiah Harris. Others in the race are Daniel Rowden of Great Britain and Jeffrey Riseley of Australia.

The Kenyan trio will be up against Fernando Carro and Sergio Jimenez of Spain, David McNeill, Stewart Mcsweyn and Jack Rowe of Great Britain

Despite the late withdrawals of British world 200m champion Dina Asher-Smith and Dutch middle-distance star Sifan Hassan, the meet features an array of world and Olympic champions and will serve as a crucial tune-up ahead of Tokyo.

Asher Smith pulled out citing a tight hamstring. She opted not to take any risks ahead of the Olympics.

“As you all know, I love running in front of a home crowd but I have to make smart decisions for myself and my body ahead of Tokyo,’’ Asher-Smith said in a statement on Twitter.

“I’m sorry to those who were hoping to see me run this week but I’m looking forward to making you all proud in a few weeks’ time.”

Asher-Smith had been scheduled to run the 200m in a marquee matchup against Thompson-Herah, the reigning Olympic 100m and 200m champion.

The Jamaican will now be the favourite in a field that also includes American Tamara Clark, who finished fourth in the US Olympic Trials in a personal best of 21.98.