AK Central Rift chair Mutai says a possible shift of venue to Nairobi would inconvenience many athletes who have been training in the region and have been financially ravaged by the coronavirus pandemic.

•Mutai was speaking during a press briefing on the plans for the Eldoret Marathon, set for June 6 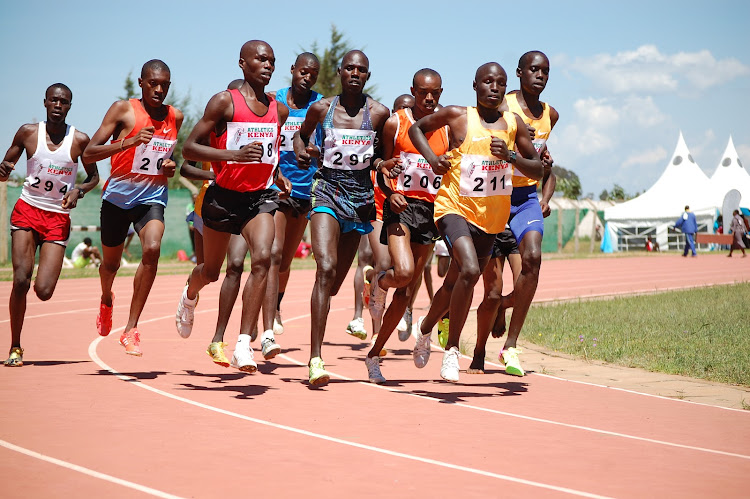 Justus Kiplagat (211) and Jacob Kosgei lead the 1500m pack at the Kipchoge Keino Stadium in a past race
Image: FILE

Athletics Kenya (AK) Central Rift officials are worried Eldoret town will miss out on the opportunity to host the national athletics trials for the Tokyo Olympics.

Abraham Mutai, the region's chair, expressed pessimism over the readiness of Kipchoge Keino Stadium — which is presently under renovations — in time for next month's trials.

“We are headed to lose the Olympic trials as a region because of the slow progress of the works at the stadium. Nonetheless,we appreciate the progress being done at the stadium. Other facilities like Nyayo are ready and we will not mind having the trials in Nairobi but next time, we hope to have it in Eldoret," Mutai said.

Mutai, however, acknowledged that a possible shift of venue to Nairobi would inconvenience many athletes who have been training in the region and have been financially ravaged by the coronavirus pandemic.

“It may not be fair for athletes to converge in Nairobi because the majority of them have not been competing and lack financial muscles to keep up in the city. We understand the coronavirus prevention measures and the crowd can be controlled but some talents are killed for failing to travel to the city,” he said.

Mutai was speaking during a press briefing on the plans for the Eldoret Marathon, set for June 6.

The marathon was initially scheduled for last month but was postponed in line with a presidential directive suspending all sporting activities countrywide to deal with the third wave of Covid-19.

Speaking at the same briefing, race director Moses Tanui warned prospective participants to register before June 2 and collect their bibs before the ultimate day of the competition.

"As organisers, we have agreed that there will be no registration extension for the athletes willing to compete in the race. Bib numbers should be collected between June 3-5 because we will not be handing them out on the material day," Tanui said.

The two-time Boston Marathon champion said the record number of athletes registering for the marathon was evidence of the hunger for competitive events within the country.

The marathon will start at Sogomo near the University of Eldoret before traversing the streets of Eldoret and finishing at Zion Mall at the Central Business District.

Due to Covid-19 and its resultant restrictions, fans have been encouraged to follow the action via social media rather than congregate in the streets as has been  the custom.