•Aiyabei made her marathon debut in Berlin in 2017, where she finished third behind Gladys Cherono and Ethiopia’s Ruti Aga 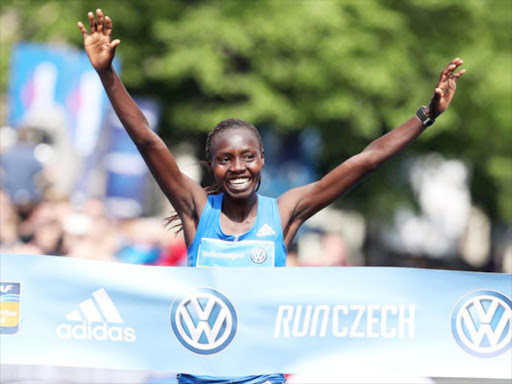 Valary Aiyabei crosses the finish line in a past race / COURTESY
Image: FILE

Valary Aiyabei Jemeli says she expects stiff competition when she makes her debut in London Marathon on October 4.

The reigning Frankfurt Marathon champion failed to finish the Tokyo Marathon in March after picking a hip injury and dropped after 25km mark.

Aiyabei, who trains alongside her husband Kennedy Tarus, has since fully healed and she is optimistic of posting  good results in London .

“ At the moment, I am in good shape and my hip injury has healed. I was not in the London line-up before the postponement in April and I see this as an opportunity and I hope to give it my best shot,” said Aiyabei, who trains in Iten, Elgeyo Marakwet under Italian manager Gianni Demadonna.

The former Barcelona Marathon winner said she will use London as a build-up for the next year’s Olympic Games in Tokyo, Japan.

Aiyabei was named in a reserve team for the Olympic Games that has been moved to 2021. “I expect London to be cut throat going by the calibre of athletes who have been listed. We have all run under 2:22 and that tells you a lot on what to expect,” said the former Kass Marathon winner.

Aiyabei made her marathon debut in Berlin in 2017, where she finished third behind Gladys Cherono and Ethiopia’s Ruti Aga.In October 2019, Aiyabei won the Frankfurt Marathon in a course record and personal best time of 2:19.10.