• Pipeline reclaimed the title they last won in 2017. They also ended the season unbeaten, to mark a five-star performance from the Paul Gitau-coached side.

• KCB captain Edith Wisa said the match could have gone either way but challenged the team to become even better when the new season serves off next month. 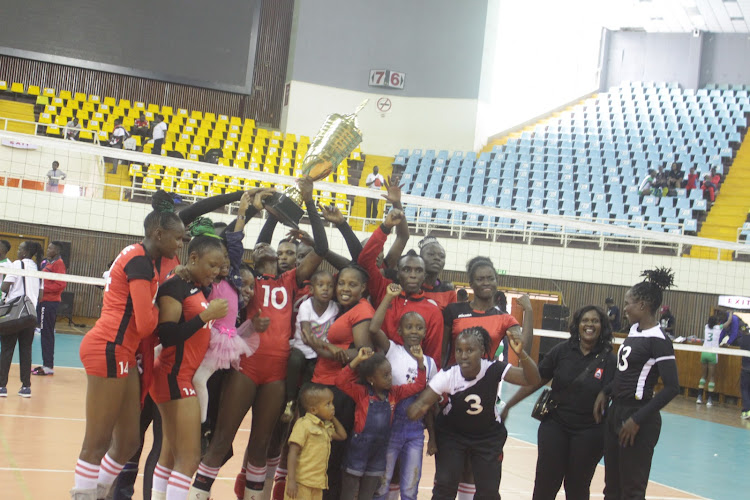 Kenya Pipeline were on Sunday crowned the Kenya Volleyball Federation Women’s League champions after beating Kenya Commercial Bank 3-1 in the play-offs at the Moi Stadium, Kasarani Indoor Arena on Sunday.

Pipeline reclaimed the title they last won in 2017. They also ended the season unbeaten, to mark a five-star performance from the Paul Gitau-coached side.

Gitau said: “I am happy we won the title even though my team didn’t play well. It is a big motivation for us after the hard work we have put in in the last two years.”

“I told my girls not to panic after losing the first set. We studied them in previous matches and we knew they normally utilise all their energy to win the first set. From the second set onwards, we knew it was our turn to change the result.”

“We now look forward to the Africa Club Championships. There’ll be no time to rest since the new season is starting soon.”

KCB captain Edith Wisa said the match could have gone either way but challenged the team to become even better when the new season serves off next month.

“We were prepared physically and mentally because we knew Pipeline were a quality opponent. They deserve the win since they were the better side.”

Wisah, who guided KCB to the African Club Championships glory in June last year in Tunisia, singled out Mariam Musa for praise saying: “She gave a good account of herself and will be a big player for us in the coming years considering this was her first time in the playoffs.”

Kenya Prisons edged out DCI 3-2 to win a five-set third-place playoff thriller. DCI won the first set 25-18 before Prisons drew back level 30-28. DCI led 15-12 in the third set but a power blackout forced play to stop for 15 minutes.

The sleuths have finished last in the past four edition of the four-team competition but coach Daniel Bor tipped his charges to silence critics.
Sports
1 week ago

The team is trying to get their act together ahead of the three-day championship slated for January 20-22.
Sports
2 weeks ago
Post a comment
by EVANS OUSURU
Sports
23 January 2023 - 05:00
Read The E-Paper