Bunyore Starlets plot big ahead of Gaspo match this weekend

•However, coach Daniel Arunga announced that winger Shalyne Onjote, who returned to training this week, will make a comeback.

•Meanwhile, Bunyore Starlets will miss the services of striker Suzan Maldah in this weekend's match. 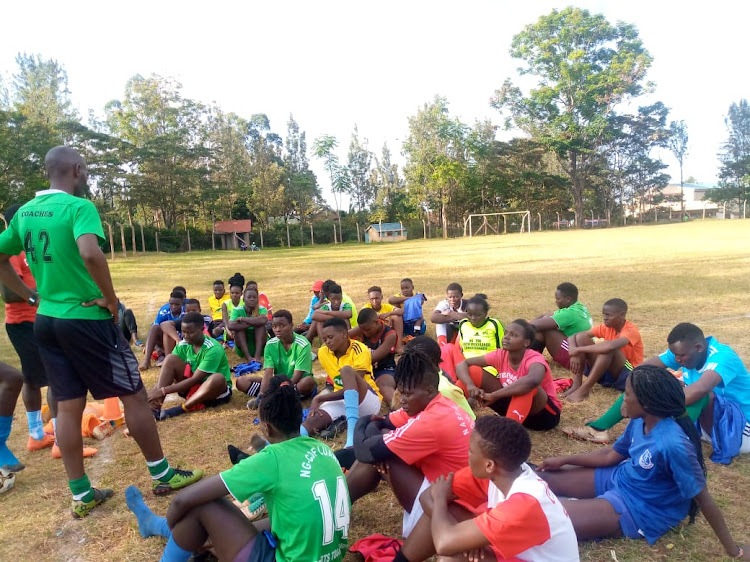 Bunyore Starlets head Coach Daniel Arunga with some of his assistants speaking to girls after training at Mumboha grounds on Wednesday.
Image: MARTIN OMBIMA

Bunyore Starlets’ tactician Daniel Arunga wants his girls not to be complacent in their next match despite holding the Women’s Premier League champions to a barren draw.

Bunyore play Gaspo on Sunday and Arunga has urged his players to ensure their opponent walks away with nothing from their home ground.

Addressing the players at Mumboha grounds, the tactician said the three points at Mumboha are very important and must be protected at all costs.

“We must work as a team to ensure we are in the top four. This will not happen if we don’t work hard,” Arunga noted.

So far, Bunyore have played four games—winning two games, losing one and drawing one. He said a winning run for the team will motivate the players after a poor run last season.

Meanwhile, Bunyore will miss the services of striker Suzan Maldah in this weekend's match.

The maverick forward lasted just 10 minutes on the pitch when the team beat Thika Queens 2-1 about 10 days ago.

The burly attacker missed the match against Vihiga and is likely to skip Gaspo's duel following a recurrence of a niggling knee injury.

However, coach Daniel Arunga announced that winger Shalyne Onjote, who returned to training this week, will make a comeback.

Bunyore are looking to build on their perfect start to the season after also scalping Ulinzi Starlets in what has been a crazy few weeks for a side in their second season in the top tier.

"We are unlucky to miss Maldah but we hope Onjote will have some minutes on the pitch. We don’t want to rush her back but she has had no setback so far. We have worked on endurance as a team because most of the players didn’t give their best last time,” he said.

The tactician credits the team’s remarkable turnaround in fortunes to a proper preseason and recruitment strategy.

“We acquired some experienced players who have brought stability to the team. Unlike last season, where we trained for just a month, we have had the luxury of spending five months together and this has really resulted in an unbreakable bond among the players.”

Elsewhere, leaders Vihiga confront Kisumu All Starlets at Mumias Sports Complex on Sunday as the team bids to return to winning ways. The former Cecafa Club champions are yet to concede a goal this season and dropped their first points of the season in the derby draw.

Defender Phoebe Owiti is unavailable after heading to Turkey for trials, according to coach Boniface Nyamunyamu.

Thika must redeem their dwindling fortunes against Wadadia who have also blown hot and cold.