Kenya worried of Philippines ahead of title defence

The three-day competition has attracted over 30 countries

• Mwakio, who took charge of the federation in 2014, said the aforementioned countries have given Kenya a run for their money in the past.

•He added that the Democratic Republic of Congo is among the best teams in Africa and must be watched keenly. 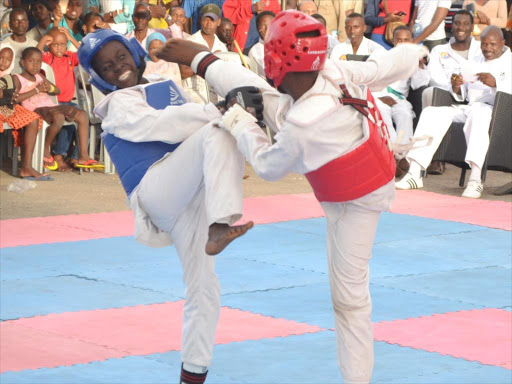 Alamin Ismail (red) fights with Hassan Mohamed (blue) during a past Kenya Tong-IL-Moo –Do Championship at Mama Ngina grounds in Mombasa.
Image: /FILE

Tong-IL Moo-Do Federation chairman Clarence Mwakio has cited the United States and the Philippines as Kenya's biggest threat in their title defence in the  Mombasa Championship set for next month.

The three-day competition is set for between December 16-18 with more than 30 countries expected to participate in the 10th edition of the annual tournament at the coast.

Mwakio, who took charge of the federation in 2014, said the aforementioned countries have given Kenya a run for their money in the past. He added that the Democratic Republic of Congo is among the best teams in Africa and must be watched keenly.

"The Philippines are our biggest competitors and they have given us a run for our money for the longest time. The US have increased the number of participants coming to this event and that speaks volume of the calibre of team they have."

"You can't afford to rule out DRC. They have come of age and they finished third last year-thanks to massive support from their government. Thailand and Korea can't be overlooked."

Their bitter rivals, the Philippines finished second with 45 medals (19 gold, 19 silver and seven bronze).  African teams claimed the next five places on the medal table, including DR Congo, Zambia, Cote d'Ivoire, Burkina Faso, Angola and Nigeria as Japan and Thailand rounded off the top 10.

Among the African teams that will be part of the event include; Ethiopia, Congo, DRC, Central Africa Republic, Angola, Zambia, Burkina Faso, Nigeria, Ivory Coast, Benin and Mali.

Mwakio at the same time pledged his support for the new Sports Cabinet secretary Hon. Ababu Namwamba, terming him the right man for the docket.

"His previous achievements are a manifestation of his commitment to the course. We will continue working together as we seek to continue our supremacy both locally and internationally."

Other countries that have sent participants at the event include Japan, Cote de Ivore, Turkey, Iran, Thailand, Brazil, South Korea and Congo ...
Sports
1 year ago

During the eighth edition, Jasiri  topped the medal table ahead of other countries, such as Turkey, Iran, Congo Brazzaville, South Korea, Zambia, ...
Sports
1 year ago
Post a comment
by EVANS OUSURU
Sports
23 November 2022 - 05:00
Read The E-Paper