As England plot their route to the T20 World Cup next February, they may have initially felt some concern at the number of senior players absent from this series

•Leg-spinner Sarah Glenn produced career-best figures of 4-23 at a damp Chester-le-Street after stand-in captain Amy Jones chose to bowl on a pitch that looked good for seam bowling. 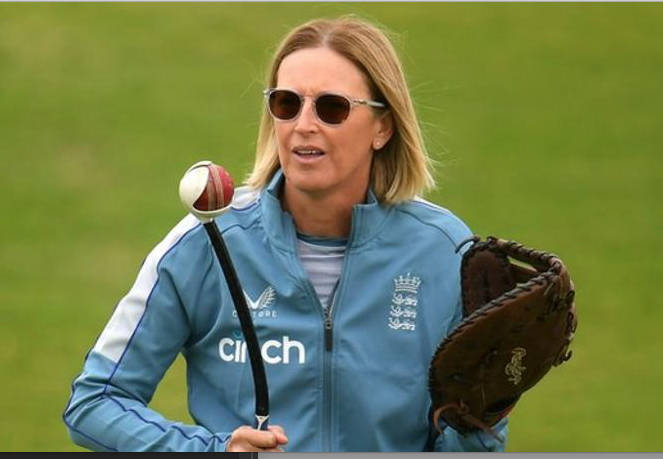 England raced to an emphatic nine-wicket victory with 42 balls to spare in the first T20 international against India.

Leg-spinner Sarah Glenn produced career-best figures of 4-23 at a damp Chester-le-Street after stand-in captain Amy Jones chose to bowl on a pitch that looked good for seam bowling.

But it was slow bowler Bryony Smith who dismissed Smriti Mandhana lbw before Glenn’s wickets restricted India to 132-7.

England then raced to their target in just 13 overs as Sophia Dunkley and Alice Capsey put on an unbroken partnership of 74 runs in just 40 balls.

It was the bowling of Glenn that set the tone for the match, as she trapped Dayalan Hemalatha lbw in between both Shafali Verma and Richa Ghosh holing out to Smith in the deep off the leg-spinner.

Glenn then bowled captain Harmanpreet Kaur in the middle overs and, while Deepti Sharma staged a mini-revival towards the close, the India total soon proved inadequate.

It was a shaky start from Dunkley, who only survived an opening-over lbw dismissal after Renuka Singh Thakur was judged to have over-stepped the crease.

But the 24-year-old grew into her innings, punishing the touring bowlers as she reached her first Twenty20 international 50 from 36 balls.

Partnered first by Danni Wyatt - who fell to an impressive stumping by Ghosh - then Capsey, it was fitting that Dunkley’s pulled four off Thakur sealed a comfortable England victory. The series continues with the second T20 at Derby on Tuesday.

As England plot their route to the T20 World Cup next February, they may have initially felt some concern at the number of senior players absent from this series.

Seamer Katherine Brunt—England’s leading wicket-taker in this format— was rested, while captain Heather Knight is still nursing a hip injury sustained earlier this summer. Nat Sciver had been set to replace Knight but withdrew herself on Thursday as she focuses on her mental health.

So, new captain, Amy Jones led an inexperienced England XI onto the field, with a debut handed to seamer Lauren Bell and two teenagers - Capsey and Freya Kemp - also included in the line-up.

Coach Lisa Keightley, in her last series overseeing the side, may have feared for her charges, who lost to India in the Commonwealth Games semi-finals last month with both Brunt and Sciver in the side.

But Glenn and Dunkley, relative veterans at 23 and 24 respectively, marshaled an England display that easily outshone that of their more experienced opponents, who produced a sloppy display in the field, offering up multiple runs through misfields and lethargic running.

A similar display at Derby from the tourists would likely see England take an insurmountable 2-0 lead in the three-match series, while the hosts will take heart from the confident performance of their youthful line-up.

Post a comment
WATCH: The latest videos from the Star
by By Mike PeterBBC Sport
Sports
11 September 2022 - 21:00
Read The E-Paper