ROAD TO THE PODIUM

Coach David Omondi said the target for the Games has been met and now the focus turns to the 2024 Paris Olympic Games.

• Wawira collected 98.5 points to settle for third behind Britons Zoe Newson and Olivia Broome, who garnered 102.2 and 100.0 points to claim gold and silver respectively. 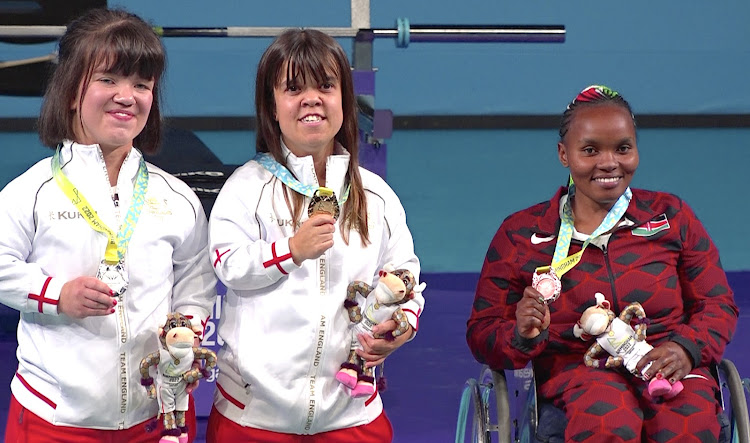 Paraliftter Helen Wawira said belief and prayers were the key ingredients behind her bronze medal at the Commonwealth Games in Birmingham on Thursday night.

“I had belief in myself and I thank God. I never gave up and finally, I won the bronze medal — which is a big achievement for me,” said Wawira

Wawira managed 95kg in her first lift and then proceeded to lift 97 kg but failed at 99kg to bring home the bronze medal.

She added the joy of winning a medal has not sunk in yet.

"It's yet to sink in. Maybe after a couple of days, it will. I am deligted with my performance," she added.

Wawira collected 98.5 points to settle for third behind Britons Zoe Newson and Olivia Broome, who garnered 102.2 and 100.0 points to claim gold and silver respectively.

The Embu-born athlete said following her disappointment at the Tokyo Olympic Games, winning bronze in Birmingham was a perfect response.

"Last year, Tokyo did not go according to plan but I had faith in God and my coach. The support team have also helped and it gives me confidence for future international assignments,” noted Wawira.

She added that beating some of the European nations made it even sweeter.

"Beating some of the big nations in the competition is a statement. This shows that with good funding and exposure, we can go places,"  she observed.

Wawira said there is room for improvement with her technique.

"I have to improve my technique and power for my upcoming assignments and with my coach taking notes, I believe I will get better,” she added.

Coach David Omondi said the target for the Games has been met and now the focus turns to the 2024 Paris Olympic Games.

"We are ticking the boxes and winning a bronze here gives us a platform to build for Paris in two years' time," he said.

Omondi attributed the good performance to intensive training for the past couple of months.

"We worked hard and if we can put in the same effort in the next two years, we can go all the way and win gold in Paris,” he concluded.

Achieng was emphatic about her form, saying she has sharpened her talons well enough to flex muscles with the world's finest at the quadrennial ...
Sports
4 months ago

Team Kenya get boost as focus turns on Birmingham

England will host the event for the third time in history with London (1932) and Manchester (2002) having hosted the previous two events.
Sports
4 months ago
Post a comment
by WILLIAM NJUGUNA Senior Sports Writer
Sports
06 August 2022 - 05:00
Read The E-Paper