Kenya Pipeline middle blocker Trizah Atuka misses out and so does Faith Imodia who plays for Kenya Commercial Bank.

•The sh 10 million package will include a week-long training camp in Serbia, September, where Malkia will play friendly matches against world champions Serbia and Colombia 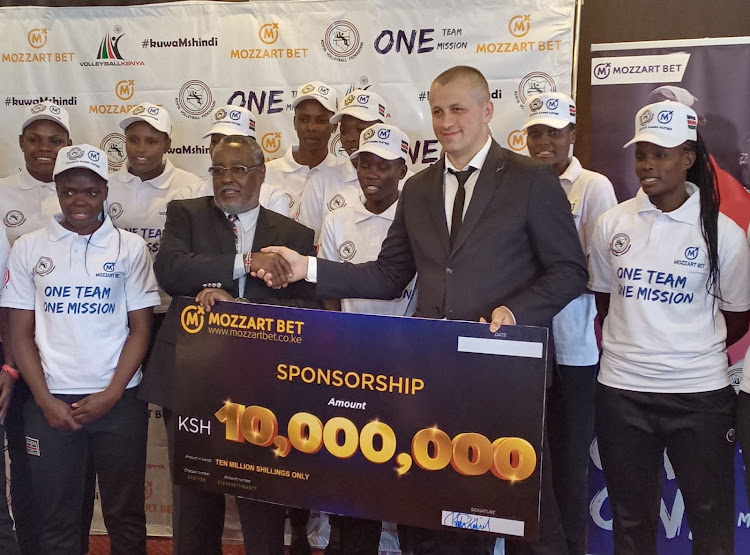 Four players have been dropped from the Malkia Strikers squad ahead of the two-month High-Performance Training Camp set for Brazil, with the team scheduled to leave on Sunday.

The biggest casualties were Kenya Pipeline middle blocker Trizah Atuka and KCB's Faith Imodia. The two were axed alongside the Kenya Prisons duo of Emmaculate Chemtai and Pamela Masaisai.

Two more players will be chopped off after the Brazil tour with the middle blocking and left attacking departments likely to be affected.

Outgoing Kenya Volleyball Federation president Waithaka Kioni said the team will only travel subject to logistical support from the government.

Kioni was speaking during a media briefing at Golden Tulip Hotel in Westlands, where Mozzart Bet inked a Sh 10 million one-year sponsorship deal with Malkia Queens.

"We were actually supposed to travel tomorrow (Saturday) but we are still in talks with the government and I am confident we will have a breakthrough soon. The camp is very crucial for the preparations of the team ahead of the World Championship," he said.

The Sh10 million package will include a week-long training camp in Serbia in September, where Malkia will play friendly matches against world champions Serbia and Colombia. The quadrennial show will be co-hosted by the Netherlands and Poland from September 23rd to October 15th.

Coach Paul Bitok said the sponsorship comes as a reprieve to the technical bench with morale in camp at an all-time low due to the uncertainty surrounding the Brazil trip.

"Mozzart Bet coming on board is a great relief to the team and the sponsorship is a game-changer for Malkia."

Bitok noted that the friendly matches in Serbia will place the team in good stead of qualifying for the second round at the World Championships.

"Playing against European countries will help us analyze their style and help bring the mood for competition into the team. Our dream is to make history and with this sponsorship, we can now focus on the quadrennial show."

Kenya is in Pool 'A' of the World Championships alongside Italy, hosts Netherlands, Belgium, Cameroon and Puerto Rico.

Malkia plead with President Kenyatta to rescue their Brazil trip

Kenya will will play matches with the hosts and also Colombia for the period before proceeding to Poland.
Sports
5 months ago

Wacu 37, has played for Malkia for the last 16 years . Wacu has played in the Olympic Games, World Cup, World Championships, African Cup of Nations, ...
Sports
5 months ago

Kenya are in the Pool 'A' alongside continental rivals Cameroon, Belgium and Puerto Rico.
Sports
5 months ago
Post a comment
by EVANS OUSURU
Sports
18 June 2022 - 00:00
Read The E-Paper