JJF partners with KFC to build basketball court in Komarock 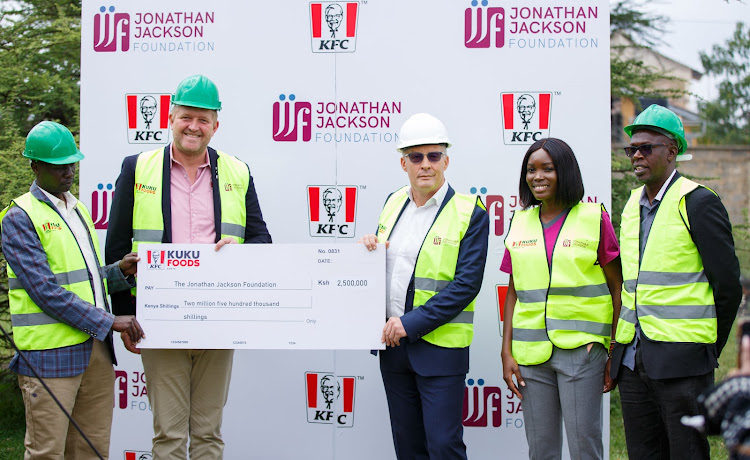 Basketball enthusiasts in Komarock and its environs now have a reason to smile after plans were unveiled to put up a new basketball court at Umama Grounds in Komarock, along Kangundo road.

The court is part of the ‘Bakee Mtaani’ programme, an initiative of the Jonathan Jackson Foundation, in partnership with KFC Kuku Foods with the grounds being donated by Devine World Parish (DIWOPA).

JJF founder Jonathan Jackson described the basketball court as unique among the four that have been constructed thus far.

"I'd like to say thank the Catholic Church for agreeing to donate their land. We don’t own it but they do. The three that we've built before, we financed them ourselves.  I'd like to thank KFC for being our first partner and for coming to join us to construct this basketball court. We hope that this will not be the last one. We hope there will be more to come," Jackson said.

Kuku Foods CEO Jacques Theunissen said the company is passionate about youth empowerment hence the decision to come on board.

“KFC employs over 1,000 youth who also form a core part of our customer base at KFC. We are, therefore, very aligned to JJF’s mission of addressing the burning issues of youth unemployment and social development,” Theunissen said.

He added: "Our partnership as KFC with the NBA in Africa also aims to create a space for aspiring basketballers to hone their skill and love for the game while winning some cool prizes as part of our Now We’re Balling campaign."

"We have so far successfully put up three courts in the Dagoretti area, but this one is significant as it's the first out in Kayole and hopefully, with a cemented partnership with KFC, this will be the first of many within the City," she said.

The project includes the identification and construction of basketball courts, sourcing of equipment, implementation training for coaches and referees to oversee basketball tournaments, and comprehensive training programs for the youths to learn the sport and ensure high levels of participation.