Kenyans are hoping for more medals from Sharon Bitok and Rebecca Matiko, who will be in action today in the women’s 1,500m.

•IDefending champion John Koech did not compete in the race as he opted for the men's 800m contest after failing to qualify.

•Kahinga beat Jamie Morga of Spain to second place in 3:56.18 while Adrey Bley of Germany claimed the bronze in 3:57.10. 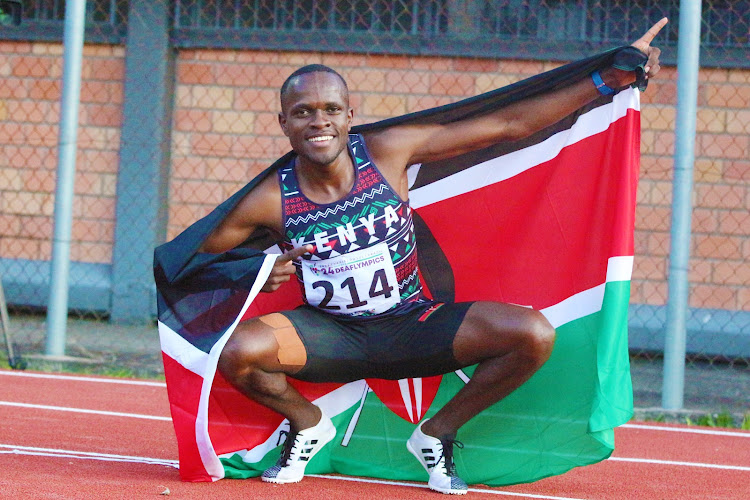 Kenya won the men's 1500m and a bronze in the women's 400m races as the 24th Summer Deaflympic Games entered Day 10 in Caxias Do Sul, Brazil on Tuesday morning.

Kenya's Ian Kahinga cruised to gold in the men’s 1, 500m while Linet Nanjala settled for a bronze in the women’s 400m after a photo finish. Kahinga crossed the finish line in 3:55.54 to win Kenya's second gold medal in the competition.

Kenya’s other representatives in the race Elkana Rono (3:57.76) and Brian Koskei (4:05.58) faded to fourth and eighth places respectively.

Rono and Koskei were in the leading pack until the last 800m when they fell off the pace.

Defending champion John Koech did not compete in the race as he opted for the men's 800m contest after failing to qualify.

Head coach Samuel Kibet said: "Koech failed to qualify for the race during the national trials held in Nairobi, but we are glad we got new blood like Kahinga who has helped Kenya to retain the title."

He added: "I'm really happy to have won my first international crown.  I have never competed outside Kenya before and so this good news is so heavy for me to bear. So far, I’m satisfied with the performance of my team in the championships. We are hoping for more medals in the upcoming events."

Kahinga said he will try to win the 5, 000m alongside defending champion Simon Kibai but warned the compatriot to brace up for a tough race.

"Kibai should brace up for a tough battle. I want to go home with two medals," Kahinga said after bagging the medal. In the 400m, Fwamba finished in 59.34 in the race which was won by Ukraine's Kristina Kaniaikani in 57.58 with compatriot Solimia Kuprych settling for silver in 57:98.

Kenyans are hoping for more medals from Sharon Bitok and Rebecca Matiko, who will be in action today in the women’s 1,500m. Kenya's  Anzanzi Nyondo and Alice Atienowill also be trying their luck in the long jump and javelin throw respectively. So far Kenya has won two gold medals, three silver, and four bronze.