The students became the first side to deny the Ghanaians maximum points in the Gold Cup club invitational tournament, which ends on Friday

•This is the first time Exchequers have dropped points, having won their past three ties

•Elsewhere, Bryan Kiplimo bagged a double for Mashujaa in their 3-2 loss to Kenya Police 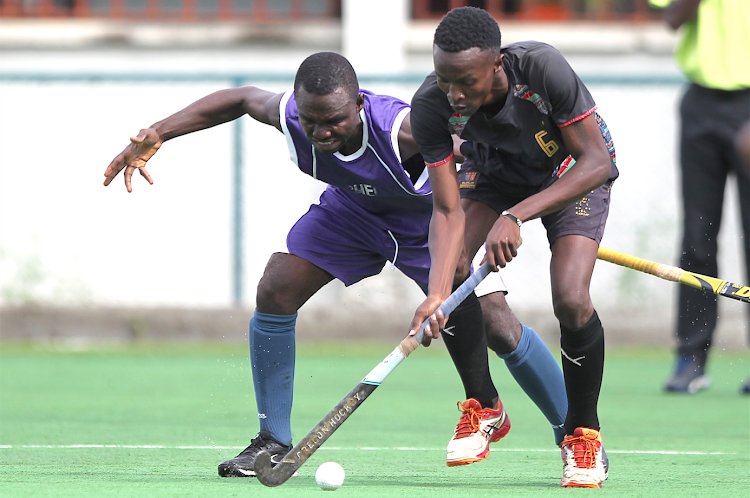 Senge noted his team has drastically improved from their last match when they lost 4-2 to the West Africans.

"Game management was better. We matched them in all aspects and I was really impressed with the way we recycled the ball. We now have to push ourselves to the limit in training. Consistency is necessary too but we are on the right track," Senge said.

Akaba Elorm scored for Exchequers in the 23rd minute before Basil Wafula came up with an equaliser for Gladiators two minutes later.

Elorm's elder brother, Akaba Elikem, who doubles up as Exchequers captain, regained the Ghanaian's lead from the penalty spot.

His weak shot in the 32nd minute skipped past goalkeeper Noah Barasa to take his tally to seven from four matches.

Persistent pressure from Gladiators resulted into a short corner that was converted by in-form forward Brian Nyabuto who has thus far scored thrice.

However, Senge was not convinced about the validity of the penalty.

"The penalty was dubious. Another unwarranted call from the umpire but the boys deserve a pat on the back for the effort," he said.

This is the first time Exchequers have dropped points, having won their past three ties.

Their coach, Richmond Attipo, said they allowed laxity to creep into their game hence the goals conceded.

"We created chances but couldn't finish them off and we got punished. Our endurance ought to improve but again Strathmore were worthy opponents," Attipo, a former Federation of International Hockey FIH umpire, said.

Exchequers lead the four-team tournament with 10 points while Police are second with six. Third-placed Gladiators have four while Mashujaa boasts of three.

Elsewhere, Bryan Kiplimo bagged a double for Mashujaa in their 3-2 loss to Kenya Police.

Kiplimo scored in the fifth and 52nd minutes as Titus Kimutai, Sammy Oungo, and Robert Masibo scored for Police.

Kimutai and Masibo were making their first appearance in the tournament after being involved in national team training.

Police take on Strathmore today as Exchequers entertain Mashujaa with the tournament ending on Friday.

"Defensive discipline was lacking and that's why we conceded a needless penalty. Players were slow in decision-making," said Senge.
Sports
1 month ago

Gladiators recovered from their 1-0 loss to USIU-A Mashujaa on Saturday to record their first win in the seven-day competition.
Sports
2 months ago

Mashujaa were without first-choice international goalkeeper, Samuel Silong, who is nursing a foot injury.
Sports
2 months ago
by EVANS OUSURU
Sports
05 May 2022 - 05:00