Team captain Joel Kiilu said their target in Brazil is a podium finish.

•Kenya is in Group A alongside Brazil, Germany, Serbia, and Cameroon while World Champions Croatia is in Pool B alongside Turkey, Denmark, Venezuela, and Ghana. 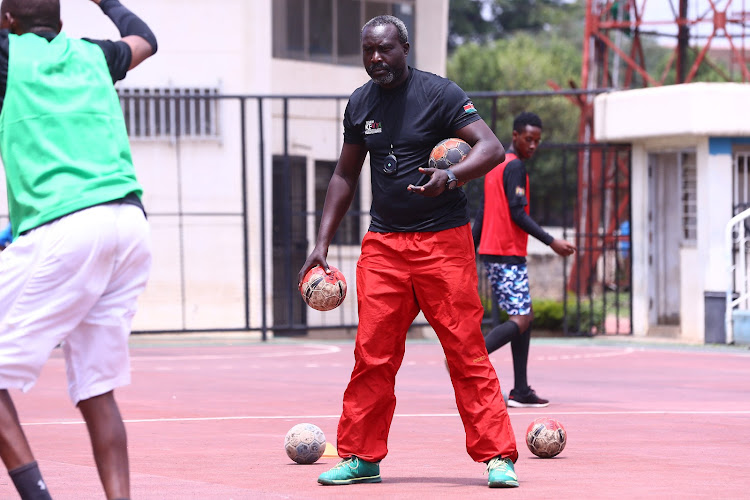 Team coach Fredrick Omole and captain Joel Kiilu said they are very optimistic about posting good results at the 24th Summer Games in Brazil set for May 1 to 15 despite being pooled against tough teams.

Kenya are in Group 'A' alongside Brazil, Germany, Serbia, and Cameroon while world champions Croatia are in Pool 'B' alongside Turkey, Denmark, Venezuela, and Ghana.

The two described their pool as the 'Group of Death' and cited Germany and host Brazil as the toughest opponents.

"We have set minimum targets for ourselves and reaching the medal bracket will be a plus for us," he noted during the team’s training session at Nyayo National Stadium.

Omole is keen to improve on especially the defence and speed-work and believes they will be at par with their rivals by the time the event starts.

"A good defensive line and a fast-paced game should deliver us the much-needed wins. Before our departure to Brazil, we will concentrate on strengthening our wing defence," he emphasized.

Omole has trimmed the squad from 24 to 15. The team reported to camp two weeks ago and have intensified their training.

“The team has gelled. Initially, the players lacked coordination but I’m happy with the progress so far. ,” added the tactician.

"The team now is in good shape and this has increased the optimism about a great showpiece in Brazil," Omole said.

He proposed that deaf teams should be incorporated into the Kenya Handball Federation leagues in a bid to improve their game.

"This will ensure continuity and talent building among the deaf, especially after coming from an event of huge magnitude like the Deaflympics," he said.

"I will take them for swimming lessons to help them build their hand and leg muscles. Swimming also helps the players to cool down after a heavy workout. We will also engage them in a bit of gym work," he said.

Kiilu said their target in Brazil is a podium finish. Kiilu, 28, who captains Nairobi Kaloleni estate outfit, Young Cobra, said they want to improve their ranking having finished fifth during the World Deaf Championships in Brazil four years ago.

Kiilu believes Kenya is capable of beating hosts Brazil and Cameroon with ease after understudying the rivals on YouTube.

"Among the tactics, we have learnt in training include feinting, shooting, and setting up a solid back defence.