TRIO IN THE MOOD

Team Jaguar upbeat ahead of Autocross 3 race in Kasarani

But the newest face in the team (also backed by Salomon Kenya) is Ghale, who made his debut in the season-opening round in Nakuru. 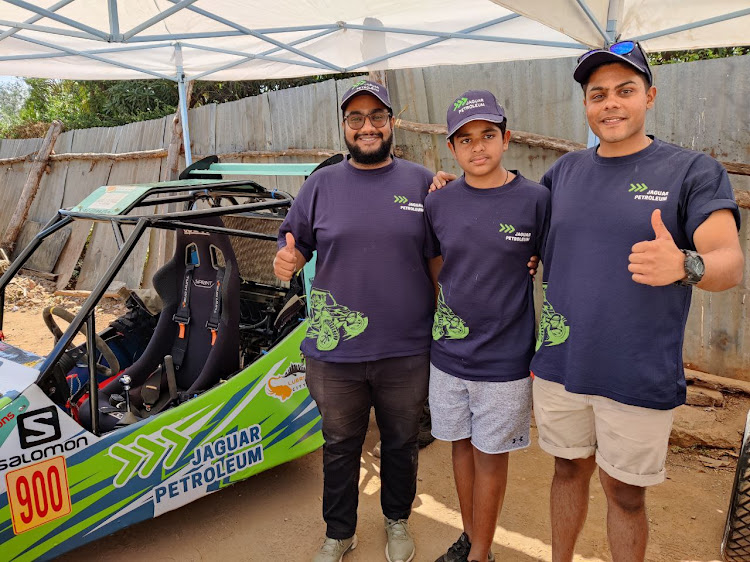 Team Jaguar Petroleum are determined to make an impression at the third round of the Kenya National Autocross Championship on Sunday with Rallye Sports Club running a twin-track at Kasarani's WRC Safari Super Special Stage.

Ecstatic about Sunday's action, team tactician Shaz Eamail aka Coach said: "The National Autocross series has grown in leaps and bounds over the past few years with several race categories being introduced. The series continues to churn out young budding talents across the country providing a worthy platform to the next level. The Jaguar Petroleum team is a group of young-budding talents hoping to make a mark in motorsport."

But the newest face in the team (also backed by Salomon Kenya) is Ghale, who made his debut in the season-opening round in Nakuru.

Ghale said: "I have been given an amazing opportunity to race by my colleagues Qahir Rahim and Coach Shaz. My expectations for this year is to finish the RSC event on a high. So far so good. We are second in the championship as I have managed to finish third in both races this year. I want to keep it clean and tidy, bring the car home in one piece while still pushing for a podium finish."

Neel added: "The season started off well. I had problems with my buggy but in the second race I ended up with a win. I'm hoping to get a good result tomorrow (Sunday) and hopefully win the championship this time round. Last season I had a brilliant chance to do so against Brandon Ng'ang'a, but missing out on one race ended my spirited campaign. It's always a steep learning curve."

Qahir will be piloting the ex- Shaz Two Wheel Drive Turbo "Attacker 1" Buggy this season. "It’s been a good year so far. I won the first race in Nakuru. Then in the second race at Jamhuri Park, I cracked a piston but I still managed to finish and score some valuable points. We are really looking forward to racing at Kasarani. It’s one of the best exposure that we get in terms of circuit racing; nice long straights and a two-lane format, " said Qahir.

" We are really grateful to get sponsorship from Jaguar Petroleum and Salomon. The goal for a season is to give it a fighting chance and indeed to go for the championship title. We will take it as it comes as we seek to attend every race this season."

Rajveer has previously spoken of a desire to team up with his father as he plots a comeback to the Kenya National Rally Championship in Eldoret in ...
Sports
4 months ago

Down to the wire as Ng’ang’a, Neel tussle for Autocross title

Ng’ang’a, who also joined the sport this year, currently tops the junior log with 159 after nine races and five wins to boot.
Sports
8 months ago
by SAMSON ATEKA
Sports
19 March 2022 - 18:01